The CRIA commissioned official Canadian music charts for the first time in the 1990s. Today Music Canada publishes the top 20 tracks and the top 20 albums online .

Limits to the award of phonograms 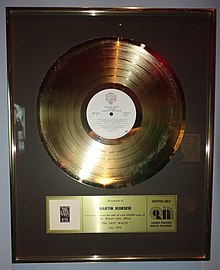 The association has been giving awards for music sales and use since 1975. Gold, platinum (up to nine times) and diamond (= 10 × platinum) are currently awarded. In 2006 the awards were expanded to include downloads, but while the album awards were retained for all formats ( CD , CC , LP and download), classic singles and song downloads were rated separately. The number of underlying copies sold has changed in line with the development of the market over time.

From 1982 to 2006 only physical single releases were awarded. In 2006 singles were separated into physical and non-physical publications, with the lending limit of physical singles being greatly reduced. Until 2016, the two-pronged approach was that with the advent of music streaming, the separation was stamped out again and from then on all singles were awarded uniformly with the integrated physical and non-physical sales, as well as the music streaming. This adjustment came into effect on September 12, 2016.