The title of this article is ambiguous. Additional meanings are listed under Columbia Records (disambiguation) .

Columbia Records is an American music label based in New York City .

Columbia Records has been part of the major label Sony Music Entertainment since 1988 . Until then it appeared exclusively in the USA under this name, but internationally under CBS Records . The US label is not to be confused with the British Columbia Records operated by EMI until the 1970s , although the latter initially became independent from the European branch of the American label.

History of the brand name

Columbia Records is the world's oldest consistently used brand name in the field of audio recording and has seen numerous changes of ownership. Founded in 1888 by the North American Phonograph Company , the label became the Columbia Phonograph in 1894 . In 1922 the US company sold its British subsidiary Columbia Graphophone Company , which in turn bought the American parent company in 1926 and finally merged with the Gramophone Company in 1931 to form EMI . Due to US competition law, however, EMI had to part with its North American operations again in 1934. This created an American and a European label called Columbia Records .

In 1988 the entire CBS music group including the Columbia label were acquired by Sony . Since the rights to continue using the CBS Records brand were contractually limited, the company was renamed Sony Music Entertainment on January 1, 1991 , and the international rights to the Columbia Records brand name were acquired for the label located below , which were still owned by EMI , albeit with them this has not been used since the 1970s.

The rights to the CBS Records brand, which have since returned to CBS, were revived in 2006 with a new label, CBS Records .

Originally, Columbia was the local distributor of Edison - phonograph and phonograph cylinders in Washington, DC , Maryland and Delaware ( USA ). This resulted from the fact that in 1887 the "North American Phonograph Co." (NAPCO) was founded by the businessman Jesse Lippincott by purchasing the sales rights for phonographs from Thomas Alva Edison and on March 26 the following year also with Edison's competitor, the " American Graphophone Company ”entered into a cooperation agreement; NAPCO now sold the Edison devices and the Bell & Tainter Graphophone of the "American Graphophon Company" in parallel. To market the devices, NAPCO founded a large number of largely independent subsidiaries, each of which was granted the sole license to sell and manufacture phonographs for certain regions of the USA. One of these subcontractors was the "Columbia Phonograph Company" under the direction of the entrepreneur Edward D. Easton , which owned the license for the " District of Columbia " with the cities of Washington and Baltimore. As was the custom at the time with some of the regional phonograph companies, Columbia produced many of its own cylinders.

While most of NAPCO's regional subsidiaries marketed the phonograph exclusively as a dictation machine for office use, in line with Edison's original intention, Easton and his colleague Victor H. Emerson believed early on in the future of the device in the entertainment industry, which is why they made commercial sound recordings in 1889, which were primarily aimed at public phonographic parlors and traveling showmen were delivered to demonstrate the phonograph at fairs and fairs. In 1891 Columbia published the world's first phonogram catalog. Just two years later, in 1893, Columbia separated from Edison and the "North American Phonograph Company" and only sold its own recordings and phonographs in the period that followed. The business division of Columbia production was taken over on the one hand by the "American Graphophone Company" for the manufacture of graphophones, on the other hand by the "Columbia Phonograph Company" for roller production. Another company was the "Volta Graphophone Company", which held the necessary patents. 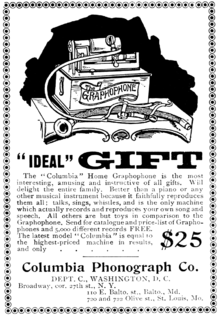 As a result of legal problems after the collapse of NAPCO, Edison was not allowed to sell phonographs and cylinders in the USA from 1894 to 1896. Columbia used this phase to build up a nationwide sales network and other expansion measures. In 1895 Columbia presented the first spring-driven phonograph, the drive technology of which became the model for the majority of all later reel players and made it possible to manufacture so cheaply that it was also affordable for private individuals as an entertainment device, which in turn was very beneficial for the sale of the reels. After Edison's return to the market, Columbia was unable to fully maintain its leading position, but remained the world's most important manufacturer of phonographs and cylinders alongside Edison's new “ National Phonograph Company ”.

In 1901 the large-scale production of normal-format shellac records and matching players began, for which the name "Graphophone" was initially retained. In the following years, record production pushed the roller production at Columbia more and more into the background, which reflected the market development - records became increasingly popular at the expense of the rollers. For a decade, Columbia competed as one of the top three in the audio recording business with the Edison Phonograph Company reels and the Victor Talking Machine Company vinyl records.

In 1904 Columbia was the first manufacturer to propose 78 revolutions per minute as the standard speed for all shellac records; In the same year, the first pressings made of particularly high-quality shellac using multi-layer laminate technology appeared. In 1907 Guglielmo Marconi developed the unbreakable “Velvet Tone” records for Columbia, and the following year mass production of the first double-sided record began. In July 1912 Columbia decided to focus exclusively on records in the future and stopped producing new cylinders and phonographs; However, cylinder copies of the cylinder recordings in the archive were pressed and sold for another year or two. The matrices were then sold to the company "Oxford Records" and largely distributed through the American mail order company Sears & Roebuck.

One of the famous Columbia Records advertising slogans from the shellac era was: Columbia recordings never go away - they just wear out!

End of independence, merging into EMI

Little Old Log Cabin in the Lane , recorded by the Riley Puckett and released on Columbia Records in 1924

In 1921 the British part of the company, the " Columbia Graphophone Company ", was spun off, but five years later it was bought up again.

In early 1925, Columbia began recording using a new recording method from Western Electric . In a secret agreement with the “Victor Talking Machine Company” it was decided not to make the new recording technology public. This was done in order not to affect sales of the recordings from the still existing acoustically recorded archive while a new electronically recorded archive was being created. The first performer to be recorded using the Western Electric method was the Hawaiian musician Frank Ferera .

After the takeover by the former British subsidiary "Columbia Graphophone Company" in 1926, the company merged in 1931 to form the new company "Electric and Musical Industries" ( EMI ). However, as early as 1934, US competition laws forced EMI to outsource and sell all North American operations. As a result, the initially independent American Columbia Records label was created, which existed parallel to an EMI sub-label of the same name (which was only allowed to be used outside of North America and Japan). For a few years they still had exclusive mutual distribution agreements, which meant Columbia (US) distributed titles from Columbia (EMI) in the USA and vice versa. In 1972 EMI stopped using the name.

Separation from EMI and decline

EMI was forced to sell the American Columbia operations; the new owner was the Grigsby-Grunow Company , which was also the manufacturer of the then popular Majestic Radio . However, Majestic soon got into a crisis from which one tried, among other things, with marketing campaigns. The so-called “Columbia Royal Blue Record”, a brilliant blue laminated record with its own record label, was remarkable in this regard. The “Royal Blue” records were produced between 1932 and 1935 and were particularly popular with collectors because of their low production numbers. A short-lived marketing gag was the "Longer Playing Record", a 10 "78 / min record with finer grooves and between 4:30 and 5:00 minutes playing time per side.

However, Columbia's decline was unstoppable at a time when the phonograph was becoming increasingly popular. In 1934 Grigsby-Grunow went under and had to sell Columbia to the American Record Corporation (ARC) for only US $ 75,000 . ARC already owned " Brunswick Records " as a premium label, which is why only less-selling publications such as the Hawaiian music by Andy Iona and the then unknown Benny Goodman were published on Columbia . By the end of 1936 all pop publications were discontinued, with which the label was almost completely discontinued.

In 1938, ARC, including the US Columbia label, was bought by William S. Paley of Columbia Broadcasting System (CBS) for US $ 700,000. (CBS was originally co-founded by Columbia Records , but Columbia was soon paid off, leaving only the name Columbia with CBS.) CBS decided to revive Columbia Records and its sub-label " Okeh Records " instead of the Brunswick label .

In 1948, Columbia released the first long-playing record that spun at 33 ⅓ revolutions per minute and became the standard for analog records, and even the standard for commercial music reproduction for almost four decades. The vinyl record presented by Peter Carl Goldmark on June 21, 1948 accelerated the decline of the shellac record .

The label gained a huge boost in popularity when the A&R boss of rival Mercury, Mitch Miller , moved to Columbia in 1950 . Miller brought a number of young artists to Columbia and built them into stars, including Rosemary Clooney , Ray Conniff , Doris Day , Frankie Laine , Johnny Mathis , Guy Mitchell , Johnnie Ray and Andy Williams ; In addition, he pushed the marketing of artists already under contract with the label, such as Tony Bennett and Percy Faith .

Miller was later accused of underestimating the importance of rock music. Clive Davis introduced this high-turnover music division to Columbia in the 1960s, for example when he signed the first multi -million dollar contract for the label with Neil Diamond , who is still recording for Columbia today. Artists like Janis Joplin , Michael Jackson and The Byrds also had their great success with the label, Jackson with the sub-label " Epic Records " belonging to the group .

Change of ownership and current whereabouts of Columbia Records

In 1988, the Japanese group bought Sony the CBS Records , including Columbia Records and other sub-label on - the upper section was then in 1991 Sony Music Entertainment renamed. Since the rights to the name CBS Records were only owned for a limited time, as this fell back to the CBS Corporation after a few years, the Columbia Records label was used from then on , for which in 1990 the naming rights outside the USA, Canada and Japan acquired by EMI. Sony Music merged in 2004 with the “Bertelsmann Music Group” (BMG) to form Sony BMG . This new company also continues to release recordings under the Columbia Records label . The exception is Japan, where the publications run under "Sony Music Japan", which is still a 100% subsidiary of Sony. In Japan there is also the - from Sony BMG independent - Columbia Music Entertainment , which has its name based on a cooperation agreement with EMI from 1931.

The names of many well-known American musicians are associated with Columbia. Billie Holiday , Dave Brubeck , Duke Ellington , Frank Sinatra , Johnny Cash , Miles Davis and Prince , among others , have published on Columbia. Barbra Streisand and Bruce Springsteen not only started their careers at Columbia, but have been recording exclusively for the label for decades; Bob Dylan , Blood, Sweat & Tears and Chicago also started their careers there. The impresario John Hammond was for decades worked for Columbia as a talent scout and took many now famous musicians under contract.