Major label refers to a company in the music industry that belongs to the group of "large", market-leading music labels . Independent record labels that do not belong to major labels are called independent labels . 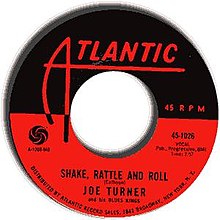 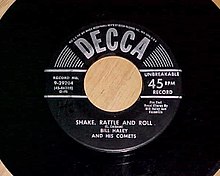 By the early 1950s, the US music market was dominated by seven record labels: Capitol Records , Columbia Records , Decca Records , London Records , Mercury Records , MGM Records, and RCA Victor . They were called major record companies because they combined the largest share of sales, had their own plate pressing plants and had their own sales network. Independent labels (with the exception of King Records and Modern / RPM Records ) did not have this production depth and were therefore dependent on independent or label-owned pressing plants and sales partners of the major labels. At the end of 1954, the independent labels dominated the market for rhythm & blues records with 23 top 30 hits , and the major labels were only able to book seven. From 1955 onwards, the rock & roll style of music contributed to a general expansion of sales in the record industry, which initially favored the independent labels and contributed to the establishment of further independent record labels. The big labels had specialized in bringing cover versions of rhythm and blues hits with white performers into the pop hit parade and often achieving better sales than the originals. A typical example was Big Joe Turner's hit Shake, Rattle and Roll , which was launched in April 1954 by the independent label Atlantic Records and, in the version by Bill Haley & His Comets, became a million seller on Decca Records . From 1956 the major labels succeeded less and less because the originals now also penetrated the pop charts as crossovers . The financial difficulties that many small labels suffered from forced them to sell their artists. The most famous example was Elvis Presley , who moved from Sun Records for $ 35,000 in November 1955 to the major label RCA Victor. Sun Records lost in this way in August 1958 also Johnny Cash , who signed with Columbia Records.

Since the 1960s, the term “major label” has changed and describes the record companies with the greatest sales success. The success of the Beatles and other beat groups in their wake made EMI (a British major label) the dominant record label in Great Britain from 1963 onwards. It split its bands across three sub-labels: Parlophone , Columbia and HMV . Since rock music began around 1970, it has been possible for every independent label to advance to a major label at short notice, regardless of the depth of production. So RSO Records became a major label from 1975 onwards due to the phenomenal success of the Bee Gees . The distinction between the two segments has therefore largely been lost.

Major labels are usually run as an independent legal form of a media group and form the sales area for the sound carrier products. With a majority stake, they belong to the media group and are economically dependent on it. The published repertoire of artists and music titles belonging to the label is numerically summarized in a label catalog. For the purpose of specializing in certain musical styles and price differentiation from the main label sub-labels (known to be sub-labels ) founded. These sub-labels are partly divided into further labels. Sony Music Entertainment alone comprises over 200 individual labels worldwide. The permanent process of concentration in the worldwide music industry and the dynamism of the establishment and liquidation of labels make transparency difficult for consumers.

The sound recording industry is structured oligopolistically around the world . So there are a few large, market-leading providers (the "major labels") and a large number of smaller record companies (the "independent labels"). The factual dominance of the market with 75% to 80% market share comes from the major labels, who have to constantly try to attract the majority of sales with their artist repertoire. It is more difficult for the big labels to set stylistic or music trends or to develop stars themselves because this involves an enormous investment risk. This market structure, combined with the high cost risks and the attempt to cover costs through mass degression, facilitates the concentration process in the music industry. It is financially easier to buy independent labels from the big ones, but the major labels have already merged with each other.

Due to their limited financial leeway, the independent labels are mostly unable to maintain their own distribution system or to advertise their phonograms at great expense. The development of new artists is therefore an even greater - possibly existential - investment risk with the small labels than with the major labels.

A change in these structures is currently becoming apparent, as the legal music download portals on the Internet now provide a cost-effective distribution option for independent labels as well and the distinction has largely been lost.

The sub-labels of the major labels

This list of major labels and their sub-labels is not complete and only provides a rough overview.