EMI is a redirect to this article. Further meanings are listed under EMI (disambiguation) . 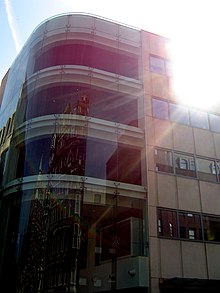 The EMI headquarters in London

EMI [ iː ɛm aɪ ] was one of the world's four largest major labels . In 2011 it was largely taken over by the Universal Music Group and has been largely dismantled since then.

Under the umbrella of EMI Group Limited are both the record company EMI Music with several sub- labels and the music publisher EMI Music Publishing .

The company was established in March 1931 as E lectric and M usical I ndustries Ltd as an association of UK Columbia Records and Gramophone Company / HMV founded. The roots of EMI go back to the year 1898, when the London Gramophone Company was founded with the participation of the record pioneer Emil Berliner . In the same year EMI opened the famous Abbey Road Studios .

During the Second World War and in the years after that, EMI Laboratories in Hayes developed radar systems and guided missiles . In 1958 the transistor computer EMIDEC 1100 was built there under the direction of Godfrey Hounsfield . The first computer tomograph was developed there from 1967 to 1976, also under the direction of Hounsfield . This costly development was financed primarily from the company's enormous profits from the sale of recordings by the Beatles .

In February 1979 EMI bought the United Artists subsidiary United Artists Records . In 1980 EMI Ltd. merged. with the British company Thorn Electrical Industries to Thorn EMI Ltd . The fields of activity that Thorn Electrical Industries brought into the group included radar and defense technology, which also earned the record label some criticism. In 1989 Thorn EMI Ltd acquired the song catalog SBK Entertainment World (over 300,000 individual works from pop music including the associated rights) for 295 million US dollars. SBK acquired this catalog, one of the world's largest, from CBS for 125 million US dollars. In 1991, Thorn EMI took over the Chrysalis Records label and, in 1992, the previously independent recording company Virgin Records from the Virgin Group for one billion US dollars . The large group , which operates in over 40 countries, was split up again in August 1996 into the two independently operating companies Thorn and EMI Group.

Now that the EMI Group in a structural and later also economic since 2001 at the latest corporate crisis was the major bank-financed Citigroup in September 2007, the company takeover by the mutual fund company Capital Partners Terra (owner: London's major investor Guy Hands), which turned out to be a bad investment. As a result of the slump in CD sales, EMI posted a pre-tax loss of £ 263.6 million in 2007. As a result of the corporate takeover, around 28 million pounds will be saved, especially in the marketing area. The worldwide number of 5500 employees of the EMI Group at the time should be further reduced. After Terra Firma could no longer raise the loan interest for the purchase price financing, Citigroup took over the EMI shares from Terra Firma in February 2011. As a result of loan write-offs, Citigroup lost £ 2.2 billion (originally £ 3.4 billion loans) and Terra Firma lost its equity share of £ 1.7 billion. The takeover of EMI by Terra Firma turned out to be one of the biggest failures of leveraged buyouts in financial history. Finally, the Universal Music Group acquired the share package, which was approved by the EU Commission in September 2012. As a result, the German parts of the EMI labels Capitol Records , Blue Note Records and Virgin Records were centralized to Berlin in May 2013, and the headquarters of Electrola GmbH was relocated to Munich in May 2013. The hit and pop label Electrola was relocated to Universal Music Deutschland GmbH in Munich, where it has been running the folk music label Koch Universal Music as a sub-label since May 1, 2013 . Only the Rhingtön label remains - because of the exclusively Cologne repertoire such as the EMI Recorded Music GmbH holding company - in Cologne. After the spectacular takeover, the music market only consists of three major labels : Universal Music Group, Sony Music Entertainment and Warner Music Group .

Breaking up and selling

In November 2011 it was announced that EMI would be broken up and the business units "EMI Music" and "EMI Music Publishing" will be sold individually. The music business, i.e. the main part of the group, in the form of shares was taken over by the American Universal Music Group , a subsidiary of the French Vivendi group and the largest music group in the world , for 1.9 billion euros . An international consortium led by the American publisher of the second largest music label Sony Music , Sony / ATV Music Publishing , acquired the exploitation rights for 2.2 billion dollars in the form of "EMI Music Publishing", the subsidiary for EMI's publishing business. Finally, a few sub-labels and EMI's stores in various parts of Europe went to Warner Music Group , the third largest music company. Furthermore, the German BMG Rights Management , the fourth largest music company for some time, which had competed unsuccessfully as a competitor to Sony for the takeover of the entire EMI Music Publishing, received the single label Mute Records , whereby it split the distribution of it with Sony Music. In the following years BMG Sony bought further parts of the EMI Music Publishing catalog.

On September 21, 2012, EMI UMG sales in Europe and the United States were approved by the European Commission and the Federal Trade Commission. So that the market power of the new company would not become too great, the EMI record label Parlophone , Mute Records and other assets had to be sold. Parlophone has contracts with artists like Coldplay and Pink Floyd .

Until the acquisition of BMG Music Publishing by the French media group Vivendi owned Universal Music Publishing Group EMI Music Publishing was with a catalog of over one million titles as the largest music publisher in the world with an annual turnover of 419.6 million pounds and an operating profit of £ 105.4 million (based on 2005).

At the end of 2007, EMI Music Publishing Germany started the paid online music service filmersclub.de , which enables video makers to dub films. The online music service was discontinued on October 31, 2011. The filmersclub catalog contained around 100,000 pieces of music from all genres and epochs, making it the largest music archive for hobby videographers on the Internet. The repertoire was completely tagged and made it possible to search for keywords and categories. All music tracks could be previewed and downloaded. The high-resolution Mp3 files had no copy protection and could be read into any common video editing program.

In February 2008 a cooperation with the BDFA was concluded.

In 2018, the Sony Corporation of America, a subsidiary of the Japanese electronics company Sony , took over the 60% share of a consortium led by the state-owned Mubadala Investment Company from the United Arab Emirates for 1.9 billion dollars (1.61 billion euros) at EMI Music Publishing. Sony thus owns around 90% of the company, the remaining shares belong to the heirs of Michael Jackson .

For almost 50 years, EMI was the largest record label in the world and is still one of the current four major labels . According to its own self- image, however, EMI Music is the largest independent music company in the world. EMI Music had annual sales of £ 1,660.3 million and an operating profit of over £ 145.1 million for the 2005/2006 financial year. EMI Music represented more than 14,000 artists in 2008.

On April 2, 2007, EMI announced at a joint press conference with Steve Jobs , CEO of Apple Inc. , that the entire music catalog was available in a higher quality (256 kBit / s instead of 128 kBit / s) and without copy protection ( DRM ) will be. The iTunes Store will be the first distribution platform that will sell the DRM-free songs. Users who have already bought EMI songs will have the option of receiving the higher quality, DRM-free version for an additional charge. EMI is the first major label to take this step. A lack of demand caused Apple to lower the price from October 17, 2007 to the iTunes standard price.

According to Guy Hands, EMI only made 15% profits of the 14,000 EMI artists. Destroying unsold CDs resulted in an annual cost of £ 25 million. According to the Los Angeles Times , almost nine out of ten EMI artists are not profitable. In fiscal 2008, EMI Music posted a loss of $ 1.2 billion, while sales fell from $ 2.8 billion to $ 2.3 billion.

As part of the crisis in the music industry, EMI intensified its cooperation with competitor Warner Music in 2008. Both groups took over sales activities for the other in Asia. While EMI organized sales for Warner in India and the Middle East, Warner sold EMI's products in Southeast Asia.