Folk music comprises folk songs and instrumental music styles which, according to the literal sense of the word, belong to the basic cultural stock of a people. In terms of style and use, folk music is distinguished from art music , church music and popular music . The instrumental folk music, which often accompanies folk dances , is predominantly derived from the repertoire of folk songs that are tied to a song text.

The use of the term “folk music” was first documented in 1770 by Jakob von Stählin in his news about music in Russia . Johann Gottfried Herder introduced the term “folk song” in 1771 as a translation of the English popular song . In the 19th century the prevailing view was that folk music originated from a very old age and without a known author from among the people. At the beginning of the 20th century, John Meier found that numerous folk songs could be traced back to a single author and concluded from this that the folk songs had been taken over from the music of the higher classes and adapted to the sense of style of the broader population. Since then, a number of controversially discussed qualification criteria for European folk music have been established.

The folk song in Germany owes its name to Johann Gottfried Herder (1744–1803), who in 1773 referred to first Scottish and then “German songs” as “folk songs” against the background of a national awareness that was already developing at that time . The term “folk dance” only dates back to the 20th century to distinguish it from “ballroom dancing”.

In the general public, however, there are shifts and contradictions in terms of terminology, from popular songs or pop songs to hits . Often the meanings are linguistically differentiated by the terms folk music and folk music (also popular hits ). In particular, fans of folk music differentiate themselves from music that they reject as commercialized "Schunkelmusik". The media, producers and friends of folk music distinguish the terms less often and also refer to this music as folk music . In contrast to the commercialized folk music of the media, there has been the art term volxmusik for a few years , which expressly means traditional folk music and its modern development and is intended to exclude the risk of confusion.

The term folk music cannot be precisely defined for the 20th century, it can be divided into:

Folk music is often no longer actively practiced, but simply consumed. The sounding music itself is fixed on sound and image carriers. This lacks their actual location, the relationship to certain events and the immediate communication situation between musician and listener. It is available anywhere and at any time. The "folk music" received passively via AV media is thus withdrawn from the characteristic sociological anchoring of folk music. It thus balances out the internal cultural codes that are essential for folk music , such as different styles, tone systems used and culturally-related texts.

There are radio and television broadcasts, especially in southern Germany, which endeavor to preserve traditional folk music - for example Mei liabste Weis .

Folk music is the traditional music, often handed down without writing, which is characteristic of certain regional cultures. When considering and differentiating musical cultures, sociological aspects must always be taken into account . This is especially true for folk music. If the determining social anchorages and the associated temporal transformations of folk music are disregarded, premature conclusions arise. A hearing impression alone does not allow reliable determinations. Precise musical characteristics or genres of folk music that would apply across the board can hardly be stipulated. In order to do this, there must be a restriction to a specific region as well as a specific time period. As in art music, a distinction must be made between vocal and instrumental music and vocal music with instrumental accompaniment. Folk music can also be unanimous and polyphonic , homophonic and polyphonic . Homophonic and polyphonic vocal music can be found in the various regions of Georgia . Geographically, these opposing ways of singing are closely related and have a social connotation .

However, there is no autonomization of art in folk songs. In contrast, the well-educated artist, who devotes himself exclusively to music creation, addresses the educated, mostly also musically educated, minority of the population of the nobility , the court and the bourgeoisie , and can essentially only be identified from the early modern period . In contrast to art music with its professional composers and trained ensembles , folk music is first and foremost a matter for laypeople. Furthermore, art music is almost exclusively committed to performance situations - i.e. a strict separation between audience and performers. Folk music, on the other hand, lives essentially from mutual interaction . 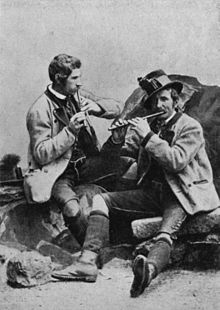 The Steinegger brothers, the Pfeiferlbuam from Grundlsee, 1880

Folk music has its origin in the music making practice of the rural , village or small town communities and, in view of the social barriers, has also developed relatively independently. It remained a direct mirror of the way of life, integrated into everyday life processes or the ( ritual ) festivals of village life or small-town society. Folk music is the most important source of popular music, but it lacks the character of a lecture or performance, it serves the oral transmission of traditions , stories and customs, as was common in societies before industrialization . Nowadays folk music has taken a backseat to popular music ( pop ). Johann Wolfgang von Goethe was of the opinion that folk music was only that which emerged anonymously from the people, but he contributed his own folk songs, just like many other composers and authors of songs that are known as folk songs due to their structure are designated. Folk music pieces and folk songs are still created in an unbroken tradition.

In the Bavarian , Austrian and Swiss regions, rural, down-to-earth folk music is also given a lot of space on the radio. It is often strictly separated from hit-oriented, popular popular music. That is why the term folk music in these areas mostly only refers to handmade folklore with songs performed in dialect and traditional folk music pieces. Most of the various forms of traditional folk music date from the 19th and 20th centuries. They were recorded in writing by folklorists and are often reinterpreted by music groups or recreated in the old style. Folk singing was also a special form of folk music. This was most pronounced in the German-speaking area in Vienna. Folk singer wore in restaurants, music halls or entertainment establishments present their folk songs in Vienna the Viennese song very close stood and also its roots represent. Folk singers, however, were not just singers; they were also solo entertainers . Towards the end of the 19th century they were therefore increasingly being replaced by other forms of entertainment such as cabaret . Famous folk singers were Edmund Guschelbauer or the " Fiakermilli ". Karl Schönfeldinger from Burgenland also belongs to this tradition, and Joseph Haydn also belongs to the repertoire , who himself provided many melodies from folk music with his own set of notes.

These include a. Waltz , polka , march , country folk , boarian , mazurkas , Scottish , double , but also minuets , dance pieces, ballads and the double performed Gstanzln and Schnaderhüpfeln . In bairisch - Alemannic area and in Austria is yodel common, special shapes are the Headquartered in the Bavarian Forest Arie yodel or predominant in alemannischen Alpine regions (Switzerland, Allgaeu) natural yodel , which largely dispensed with its catchy harmonies instrumental accompaniment. Traditional folk music is also cultivated in all other German-speaking areas and among the traditional minorities in Germany, especially on the North Sea coast in Low German . In the last five decades there has been a strong departure from traditional, dialect music among young people due to the dominance of (especially English-language) popular music (including rock and pop in particular ). This trend has turned in Switzerland. Since 2010, a veritable wave of folk music has also reached urban youth. Folk music mixes with rap and pop.

The often heard assumption that folk music is the music of a nation , of a state people , is untenable in this exclusivity - it only emerged when folk music was appropriated by nationalist movements. There are numerous regional similarities across language and national borders, as the example of Zwiefacher shows , among many others . Texts are translated and melodies are passed on.

Folk music from other peoples in German-speaking countries

Folk music from Ireland , such as Irish Folk , and from the USA , where there are several directions, such as country or blue-grass , experienced popularity in German-speaking countries . Greek rebetiko (political and social issues), Yiddish music with predominantly Klezmer interpretations (especially from Eastern Europe ) and gypsy music - mainly the Hungarian csárdás (pronounced Tschardasch) should also be mentioned here. In the last decades, from the 1980s onwards, the “Gitano Andaluz” became better known. Or better known as Spanish flamenco , whose roots come from Andalusia (southern Spain). Whereby, however, the emergence of flamenco comes from a combination of the Gitanos (the "Gypsies") and the "Payos" of the non-Gypsies. As the name suggests, Rumba-Katalan is cultivated and cherished by the Andalusians who live in Catalonia and who have immigrated from the south.