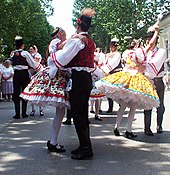 Csárdás [ ˈt͡ʃaːr.daːʃ ] (also Czárdás , from csárda : tavern, village tavern) denotes music , a traditional dance form of the population of Hungary and the neighboring countries, especially Transylvania , as well as a basic figure of this dance form.

The dance form consists of several parts and is improvised on the spot, by each couple individually, by solo dancers and also in groups of women, men or several couples. At first at a slow tempo ( lassú ), later the wild, increasing, straight-beat main dance of the couples in major ( friss ) follows .

The dance figure Csárdás is basically a sideways alternating step of the couples in place and without turning. Another typical figure is turning together in the square with a line-up offset from one another - equal shoulders to one another. Also, a large variety of Plattler figures of men is part of the czardas. The entire dance consists of a large number of figures, which the dancers put together improvisationally. Dance dialects have developed through which different forms of Csárdás can be distinguished.

The music of the csárdás is mainly Hungarian or Romanian folk music in the 19th century , often performed by "gypsy bands " with first violin ( prím ), second violin ( contra , often a viola ) for chordal accompaniment and bowed bass also with the hurdy-gurdy tekerőlant . With Franz Liszt she found her way into art music . Liszt composed several csárdás for piano, the best known are the Csardas macabre and the Csárdás obstiné . In addition, a famous composition of the Csárdás for violin and piano by the Italian violin virtuoso and composer Vittorio Monti .

There are different opinions about the origin of dance. Some see the origin in a Heiduckentanz , others have the connection with the Verbunkos (derived from advertising ) out a dance, which in the 18th century gypsy bands soldiers for the Habsburg enlisted army.