from Wikipedia, the free encyclopedia
This is the sighted version , flagged on April 30, 2020 . There is 1 pending change that has yet to be viewed.

The title of this article is ambiguous. Further meanings are listed under Polka (disambiguation) . 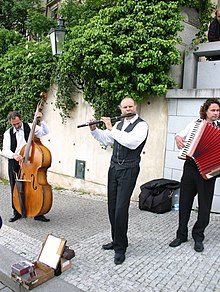 The polka is a lively round dance in lively to rapid two-four time or alla breve . The name comes from the Czech Republic ( Bohemia ). The basic form is a sequence of polka steps or alternating steps (short-short-long) with an emphasis on the first short step, i.e. alternating on the left and right foot. Originally, this change step was initiated with one hop in Bohemia and completed with one hop in German regions.

The name Polka means “Polka” in Czech and Polish. Around 1830 the dance was called půlka ("half"), the name was changed to Polka in Prague in 1835 - probably out of sympathy for the then heavily oppressed Poles (see November Uprising ), according to other information according to the Polish singer Esmeralda.

A forerunner of the polka in Czech folk dance is the "nimra".

The dance is said to come from the town of Elbeteinitz ( Týnec nad Labem ), where it is said to have been invented by a Czech country girl, Anna Slezák, in 1830. Then he would have the name of his half step (step change step, Czech: půlka = half). When the polka found its way into Prague in 1835 and in Vienna and Paris in 1840 , it quickly spread across Europe . According to other sources, the story about Anna Slezák is improbable and just a widespread legend.

It is danced to very simple music in two-four time and consists of 3–4 reprises of 8, 12 or 16 bars. The movement is fairly quick, but slower than a gallop . By ballet master came - individual taking up Pas (dance steps) from other Slavonic Dances - several varieties of polka, so the hongroise polka , the mazurka (polka mazurka) , Polka à la Polacca , also of Johann Strauss apprehended Schnellpolka and others.

Origin of the dance step

The step can be traced as a hop in German folk dance long before 1800 . In 1742 Johann Sebastian Bach used a hop in his peasant cantata .

The exact form of dance is in the Rhine Franconian 1811 as Hipper handed down, even the Scottish -Rundtanz (Scottish Walzer) uses this step.

In folk dance, polka or Scottish are handed down in many countries: Austria (Krebspolka), Germany, Switzerland, the Netherlands, Denmark (Tyrolerhopsa), Sweden, Norway and of course the Czech Republic, Slovakia, Poland and many other countries.

In folk dance - where the polka has been recorded since around 1835, in Austria since around 1840 - the cheerfulness of the music and the rapid rotation lead to the fact that the dancing is often quite exuberant. When ballroom dancing art, among others, is in a good dance pose .

In Austrian folk dance , there are the following distinctions:

In the new folk music , polka melodies a. a. played by the folk rock band HISS .