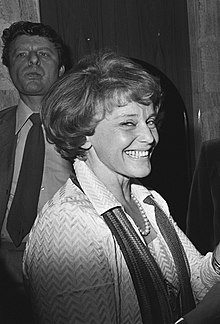 Maria Schell was the daughter of Hermann Ferdinand Schell , a Swiss writer , and Margarethe Noé von Nordberg , a Viennese actress. She grew up with her siblings Maximilian , Carl and Immy first in Austria to before the family after the connection of Austria to the German Reich in 1938 to Zurich fled.

However, the family without money did not have the opportunity to live together with relatives. So the parents distributed the children. Maximilian and Carl came to an orphanage in Basel, Immy to a children's home in Brunnen near Schwyz and Maria in Colmar. Here she learned French without an accent. Only then did she later have the opportunity to take on the role of Gervaise in the film of the same name . At the end of August 1939 she went to live with her parents in Zurich. She actually only wanted to go on vacation for a week, but a few days later the war broke out.

Schell broke off a commercial apprenticeship when her talent was discovered by Sigfrit Steiner and she got a film role in the film Steibruch at the side of Heinrich Gretler in 1942 . At that time she played under the name Gritli Schell without any special training. Only then did she take acting lessons and receive several theater engagements . From 1948 she turned back to film. Schell played her first leading role in 1948 in The Angel with the Trumpet . Films with Dieter Borsche ( Dr. Holl ) and OW Fischer followed again and again .

Her role in The Last Bridge , directed by Helmut Käutner, brought Schell the 1954 Grand Prix of the Cannes International Film Festival for best actress. In the same year she was honored in Venice with the “Coppa Volpi” for the title role of the laundress in Gervaise , which was also nominated for an Oscar for best foreign film . During her stay in Hollywood on the occasion of the award ceremony, she was “discovered” by Yul Brynner in a hotel lobby; he stood up for her as the cast of "Gruschenka" in the film adaptation of Dostoyevsky's novel The Brothers Karamazov . Schell then turned u. a. with Gary Cooper in The Gallows Tree and with Glenn Ford in Cimarron . The 1953 film As long as you are there also became famous . In the 1960s, Schell appeared increasingly on theater stages and on television.

Maria Schell in 1971 at a reception given by Federal Chancellor Willy Brandt in conversation with Liselotte Pulver and Horst Ehmke . In the background Horst Tappert and Mario Adorf

In the 1970s she was frequently seen in television series such as Tatort , Derrick and Der Kommissar, as well as in an episode of the US series Kojak as Sister Lepar Angelica / Princess Viva Dushan. Fifty-year-old Schell made an exceptionally successful stage debut on Broadway in 1976: her portrayal in Pavel Kohout's Poor Murderer elicited exuberant praise.

In 1982 she played the role of Claire Zachanassian in Max Peter Ammann's stage film The Visit of the Old Lady by Friedrich Dürrenmatt . Her last big popular success was the television series The Happy Family (1987 to 1991). 1994/1995 she worked in the television saga Der Clan der Anna Voss . Her last appearance was in 1996 in the episode Heilig Blut in the crime series Tatort .

In 1991, Schell attempted suicide. In her later years until shortly before her death, she lived in seclusion on an alpine pasture in Carinthia, which her parents inherited . Already in poor health, she also suffered two strokes. In 2002 her brother Maximilian shot the documentary My Sister Maria about her , which also addressed her elderly dementia . Both received the Bambi TV award for this . At the premiere of the film in February 2002, Maria Schell appeared in public for the last time.

Before Easter in 2005, she was hospitalized for breathing difficulties. She died of heart failure as a result of pneumonia . Her grave is in the Preitenegg cemetery in Carinthia.

Maria Schell was married to the director Horst Hächler from 1957 to 1965 and to the director Veit Relin from 1966 to 1986 . Both marriages ended in divorce. Her son Oliver (* 1962), who is active as a director, musician, stage operator and actor, comes from the first marriage, and from the second her daughter Marie Theres Kroetz-Relin (* 1966), who is also an actress.

From her fellow actor Oskar Werner she was nicknamed "little soul", which she disliked all her life (" Because little soul is the reduction of the soul. Not to be taken very seriously ").

The actress has received numerous film awards and honors over the course of her career: eight times the Bambi , the Coppa Volpi at the Venice Film Festival , the German Film Prize and the Federal Cross of Merit . On the occasion of the 10th anniversary of her death, Austrian Post dedicated a special stamp to her.

From 1952 she received a tram pass for life from the city of Karlsruhe as an award for the many Bambis she received.