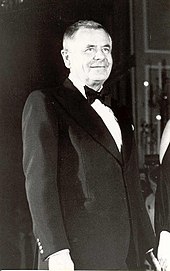 Gwyllyn Samuel Newton Ford alias Glenn Ford (born May 1, 1916 in Sainte-Christine-d'Auvergne , Québec , † August 30, 2006 in Beverly Hills ) was a Canadian -American film and television actor . His father - an entrepreneur - owned, among other things, a company in the town of Glenford , where Ford spent most of his childhood. His stage name is thus a throwback .

When he was eight, he came to California with his parents . Ford became an American citizen in 1939 .

Became known Glenn Ford, who with Canadian Prime Minister John A. Macdonald was used in 1940 on the side of Rita Hayworth in the film The Lady in Question , one in France gambling Drama . Ford and Hayworth made four other films together: Gilda (1946), a love drama in the style of film noir , Love Nights in Seville (1948), a film adaptation of the famous novella Carmen by Prosper Mérimée , and the crime films Affair in Trinidad (1952) and Gold trap (1965). Gilda in particular made Ford and Hayworth well-known lovers in the cinema.

In 1943 he married the actress and dancer Eleanor Powell , in 1945 their son Peter Ford was born. None of Glenn Ford's four marriages lasted long.

In the 1940s and 1950s, Glenn Ford appeared mainly in westerns and film noirs. In the western films he mostly played the upright hero. He was rarely seen as a villain : in The Judge of Colorado (1948) he was a power-obsessed judge at the side of William Holden and in Count to Three and Pray (1957) a murderer and stagecoach robber. In Der Berg des Schreckens (1949), a mixture of western and crime novel, Glenn Ford again played a prospector who took revenge on a greedy couple.

In 1953 and 1954 Glenn Ford made two films in the Black Series directed by Fritz Lang ; In Hot Iron he played a policeman who avenged his wife's death; in lust for life the lover of a married woman who tries to induce him to murder her unloved husband. Other films from this period show that the western hero also understood the serious trade: In Kidnapping (1956), Ford portrayed the father of a kidnapped boy who offered the ransom as a bounty on the kidnappers. In The Seed of Violence (1955) he played a teacher who wanted to get his violent students back on track. Of kidnapping in 1996 came a remake in theaters, Glenn Ford's role was supported by Mel Gibson played.

Glenn Ford also appeared in film comedies . In The Little Tea House (1956) he was an army officer who wanted to bring the American way of life closer to the Japanese in post-war Japan, which, however, was thwarted by Marlon Brando as a cheeky interpreter Sakini. In The Lower Ten Thousand (1961) he played a sentimental gangster and in Father Is Not Married (1963) a single father who is matched up by his six-year-old son.

The American television audience also remembered Glenn Ford as a commentator on the 1978 television series “ When Havoc Struck ” (“When the destruction broke out”), which dealt with technical and natural disasters, such as bridge collapses, earthquakes or individual events such as the landslide from Aberfan in 1966 or Hurricane Camille in 1969.

Ford was inducted into the Western Hall of Fame. It is said that he was the fastest actor in gun warping alongside John Wayne and James Arness . He died of heart failure on August 30, 2006 at the age of 90 . His final resting place is in the Woodlawn Memorial Cemetery in Santa Monica , California .