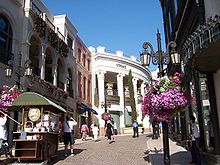 Beverly Hills is a city in the western part of Los Angeles County in the US state of California . Like the city of West Hollywood to the east , it is completely surrounded by Los Angeles , and both are therefore often mistakenly regarded as districts of Los Angeles. Beverly Hills has an area of ​​14.7  km² and a population of 34,109 (as of 2019). The place is known as the home of numerous prominent American actors, directors and other wealthy residents of the Los Angeles metropolitan area .

The area of ​​today's Beverly Hills was explored by Spanish explorers. In 1769 several soldiers under the leadership of Gaspar de Portolà , who explored Alta California on behalf of the Spanish King , left their camp in what is now Los Angeles and advanced into the area on what is now Wilshire Boulevard . Also Junipero Serra was a member of this group.

In 1852 Maria Rita Valdez de Villa submitted a petition for the purchase of 4539 acres (18 km²). On this she had a house built, which stood in the northwest of today's Sunset Boulevard . Maria sold her land, which she named Rancho Rodeo de las Aguas , to Henry Hancock in 1854 for $ 4,000 . Wheat, cattle, oil, and wool were the ranch's income until 1868. In the same year, Edward Preuss bought the ranch for $ 10,775. However, he sold the land to Charles Denker and Henry Hammel, who used the land for harvesting lima beans .

Eventually in 1900 an oil drilling company acquired the area. By 1906, however, the oil drilling proved to be unprofitable. Because of this, the entire land was subdivided into land and roads surrounded by palm trees , acacias , eucalyptus and pepper trees. The planning was done by Wilbur D. Cook and Frederic Law. The area was named Beverly Hills ; It was named after Beverly Farms on the east coast in Massachusetts, a summer vacation area for wealthy Bostonians and New Yorkers. The first major construction project was The Beverly Hills Hotel , which opened in 1912 . The first people came to the new city in 1914, and the first celebrities came in 1919 with the actors Douglas Fairbanks Sen. and Mary Pickford . They built their joint property known as Pickfair .

At the beginning of the 1920s, the area had a sufficiently high population density that the issue of water supply became an issue. The usual solution to be incorporated into Los Angeles met with considerable opposition, borne by, among others, the more prominent residents of the entertainment industry.

In 1925, Beverly Hills was expanded to include the 385 acre UCLA campus . In the same year, Will Rogers became the city's first mayor. The town hall was built in 1931.

During the time of National Socialism in Europe, Beverly Hills became the home of numerous emigrants. So lived u. a. the author Franz Werfel , who died in Beverly Hills in 1945, Alma Mahler-Werfel until 1951 and the world-famous conductor Bruno Walter until his death in 1962 here.

Over the years Beverly Hills became more and more exclusive with hotels like The Beverly Hills Hotel and Beverly Wilshire , companies like AMPAS and boutiques from fashion companies like Gucci and Prada . The Samuel Goldwyn Theater is located on Wilshire Boulevard and traditionally hosts the annual live television broadcast of the Oscar nominations in January.

Beverly Hills is located on hilly terrain and mainly houses elegant houses in magnificent gardens. The streets are lined with palm trees and well-tended front gardens. With the Rodeo Drive , the place has one of the most expensive shopping streets in the world.

The Beverly Hills Oil Field lies beneath the city .

There is a large Persian community in Beverly Hills : 20% of the residents and 40% of the pupils and students are now of Persian origin.