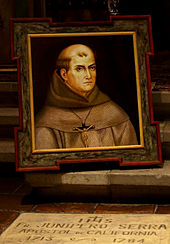 Brother Junípero Serra or Catalan Fra Juníper Serra (born November 24, 1713 in Petra , Mallorca , † August 28, 1784 in San Carlos Borromeo de Carmelo in California ) was a religious priest and Franciscan . He is venerated as a saint in the Roman Catholic Church and is considered the founder of the city of San Francisco . His feast day is August 28th. 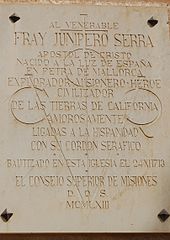 Plaque on the parish church of Sant Pere in Petra

Junípero Serra was born in 1713 as Miquel Josep Serra i Ferrer . At that time there had been a Franciscan monastery in his birthplace Petra for over a hundred years, where school lessons were also given. At the age of 16, the farmer's son Miquel Josep Serra joined the Franciscans and took the religious name Junípero to dress . Brother Junípero studied at the University of Lulliana in Palma and obtained the Doctor theologiae . From 1744 to 1749 he worked in Palma as a preacher and lecturer at the university. He was then sent to the viceroyalty of New Spain as a member of a group of Franciscans .

For about twenty years he taught at the Colegio de San Fernando in Mexico City and at the mission stations of the Sierra Gorda in central Mexico (e.g. Jalpan de Serra ); he translated the catechism Romanus into the language of the local Pame Indians. Appointed commissioner of the Inquisition in 1752, as part of his missionary work he also led trials of witchcraft against Indian medicine men . In 1768 he was sent to Baja California to take over the management of all mission stations there. These were once used by Jesuits founded and operated the Jesuits had been expelled from the Viceroyalty of New Spain but in 1767, as a few months earlier from all over Spain. Brother Junípero traveled all over Baja California, founded a new mission station, the Misión San Fernando Rey de España de Velicatá , and reached San Diego on July 1, 1769 , where the Presidio of San Diego military base had existed since May of that year . Junípero Serra also set up the first mission station in Alta California , the Mission San Diego de Alcalá . From here he moved north on the coast to Monterey and was involved in the establishment of eleven of the twenty-one mission stations in California over the course of time . Many of the missions evolved over time into cities with Spanish names: San Diego, Los Angeles or Santa Barbara . Most of these names were given by Junípero Serra after saints to whom the side altars in the Church of St. Saint Bernard of Siena in his native Petra. Brother Junípero died in 1784 in what is now Carmel, California. 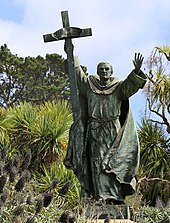 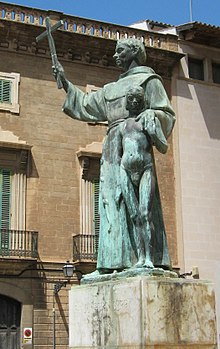 On the northern edge of Petra is the parish church of Sant Pere, built from the 16th to the 18th century on the foundations of an older church. The baptismal font over which the newborn Miquel Josep was held is also part of the rich interior. Via Carrer Major you get to the convent of St. Bernhard, founded in 1607 and the seat of the monastery school of the young Junípero Serra. A memorial in front of the building reminds of various stages in his life. Carrer Fra Juníper leads west from the convent , past a series of tile pictures of the various missions, to the birthplace and museum of the Franciscan. The house where Junípero Serras was born is in the oldest part of the village, on Carrer Barrancar Alt. Nearby, a house built in 1959 houses the Museu de Pare Serra, a museum devoted to the life of the missionary using maps, paintings and documentation.

Junípero Serras Patronage is subordinate to Serra International , an international lay community for the promotion of spiritual professions in the Roman Catholic Church . Brother Junípero is revered as the city founder in the United States . His bust stands in the Capitol in Washington, DC , surrounded by other heroes of the American nation.

Indigenous people in particular criticize his canonization, because ancestors also suffered from the activities of this missionary. An online petition against canonization was supported by over 10,000 signatories.

The relationship to the Indian population is controversial. Older works assumed that he was received kindly. According to this, there was no mistreatment of indigenous people. Other sources describe that 90,000 Native Americans were forcibly served and detained in their missions with the support of the Army. They had to give up their language and customs and were obliged to do forced labor. Of an estimated 310,000 Indian residents who lived in California in 1769, 100 years later only a sixth was left.