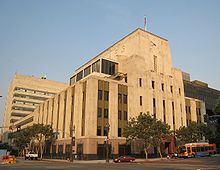 The Los Angeles Times is a nationwide American daily newspaper based in Los Angeles , California . In 2019, the circulation was officially 417,936 copies on weekdays, and 945,000 on Sundays, according to the company. This makes it one of the daily newspapers with the highest circulation in the USA. The Internet presence of the Los Angeles Times , like that of other large US media publishers, was blocked for many European users after the GDPR came into force at the end of May 2018 due to fear of being sanctioned for possible data protection violations.

The first issue appeared under the name Los Angeles Daily Times on December 4, 1881. However, the project quickly went bankrupt . Under the legendary publisher Harrison Gray Otis , the sheet was then led to success under the name retained to this day. The LA Times was initially a strictly conservative Republican newspaper. Otis' fight against the unions resulted in a bomb attack on October 1, 1910 , in which 21 people died and the editorial building was destroyed. In 1917, Otis' son-in-law Harry Chandler took over the helm of the LA Times . The Chandler dynasty ran the Times until the 1980s. In the 1960s, the political orientation of the newspaper changed to a more liberal stance.

Of course, the content was shaped early on by the proximity to the film city of Hollywood . In the jazz-dominated era around 1920, audiences began to shift their interest away from romance films to moralizing films. The Los Angeles Times therefore organized a survey, was asked in "what film of DeMille you want to see at the cinema?". Most of the readers opted for a film with a historical-religious theme, specifically eight people, independently of one another, suggested The Ten Commandments .

In 1989 the last competitive newspaper , the Los Angeles Times , stopped appearing. It was the Los Angeles Herald-Examiner . In 2000 the LA Times was taken over by the Tribune Company , one of the largest American media groups. The circulation of the LA Times has decreased significantly since the beginning of the newspaper crisis . On August 21, 2007, the shareholders of the “Tribune Company” approved a sale to the multi-billionaire and real estate entrepreneur Sam Zell . The sales price was $ 13 billion (then 9.7 billion euros). In addition to the Los Angeles Times, the “Tribune” group at that time included the Chicago Tribune and nine other daily newspapers, 23 television stations and the Chicago Cubs baseball club . In December 2008 the “Tribune Company” applied for bankruptcy protection .

In February 2018, the Los Angeles Times and the San Diego Union-Tribune were sold to Patrick Soon-Shiong for $ 500 million .

In June 2005, the Los Angeles Times conducted a wiki experiment called Wikitorial to actively involve readers and failed a few days after it began. On 17 June 2005, published Los Angeles Times under the title War and Consequences their first Wikitorial (war and its consequences), it dealt with the war in Iraq . An invitation to the readership to edit the post on the wiki was attached below the post. The experiment was called a public beta and it was assumed that it might be a failure or a new form of opinion journalism.

Jimmy Wales , founder of Wikipedia , was one of the early participants in the new Wikitorial, which sparked an editorial of opposing viewpoints, a lot of redirects and a large amount of discussion.

However, the wikitorial was closed again on June 19, 2005. Presumably, this happened in response to vandalism after various images from goatse.cx were uploaded to the wiki. Around 4:30 a.m. local time, the wiki was overwhelmed with pornographic photos, which were initially restored to their original state by a helper within seconds. Shortly after 5:00 a.m., however, the site was shut down.

Readers who want to visit the site have since found the following message:

"Where is that wikitorial? Unfortunately, we were forced to remove this feature - at least temporarily - because few readers flooded the site with inappropriate material. We thank the thousands of well-meaning people who have participated and we apologize. "

During the two days that the wikitorial was available, the original text had grown from under 1,100 words to over 2,700 words. Several experienced wiki writers had made suggestions for the organization of the wikitorial.