The Chicago Cubs are an American baseball team. You play in the Central Division of the National League . The Chicago Cubs come from Chicago , where they were founded in 1870. The team plays their home games at Wrigley Field .

The Chicago Cubs are members of the Central Division of Major League Baseball , whose championship they won in 2003, 2007, 2008, 2016, and 2017. You are one of two major league teams based in Chicago, (the other being the Chicago White Sox ) and one of the two remaining founding members of the National League alongside the Atlanta Braves . The Chicago Cubs are the oldest active American professional sports club that is continuously based in the same city.

In the first decades of the National League, the Cubs were among the dominant teams in the league, but in the period after World War I they never regained their former strength. Until 2016, the team was unable to repeat its World Series victories of 1907 and 1908 . After a successful season and postseason in 2016 , the Cubs reached the World Series for the first time after 1945 , defeated the Cleveland Indians there after seven games and won their third title. In 2017, the Cubs were named “Team of the Year” at the Laureus World Sports Awards .

The Cubs are often referred to as "The North Siders" because their stadium, Wrigley Field, is in Chicago's northern Lakeview district. Other nicknames of the team are "Cubbies", "Boys in Blue" because the main color of the jersey is blue, and "Lovable Losers" because of the popularity despite the continued failure to win the World Series.

In December 2007, entrepreneur Sam Zell acquired control of the Chicago Cubs by purchasing the Tribune Company . In 2009 he sold the franchise to the Ricketts family. The owner Joe Ricketts is the founder of TD Ameritrade.

The Cubs have special rivalries with the St. Louis Cardinals , the Milwaukee Brewers, and city rivals Chicago White Sox.

The team had become known under different names until 1902. On March 27, 1902, the Chicago Daily News ran the headline:

" Selee places his men: Manager of the Cubs is in doubt only in two positions. "

“ Selee puts his men together: The manager of the youngsters still doubts about two positions. "

The word cubs was synonymous with young players. The newspaper typesetter had accidentally capitalized the word. This term replaced the previous team name Colts over time, and in 1907 the name Cubs appeared on the official match reports.

In 1945 the Chicago Cubs reached the World Series. Opponents were the Detroit Tigers . The first three games took place at Briggs Stadium in Detroit. The Cubs started their home games with a 2-1 lead. Before the fourth game, William "Billy Goat" Sianis was not allowed to bring his goat Murphy into the stadium. PK Wrigley, the owner of the Cubs at the time, named the goat's stench as the reason for the entry ban. Sianis was a die-hard Cubs fan and owner of the Billy Goat Tavern . Sianis left the stadium with the words:

“ The Cubs ain't gonna win no more. The Cubs will never win a World Series so long as the goat is not allowed in Wrigley Field. "

“ The Cubs will never win again. The Cubs won't win the World Series until the goat at Wrigley Field is admitted. "

On November 2, 2016, the Cubs broke the supposed curse after they defeated the Cleveland Indians in the best-of-seven series of the World Series in the seventh game with 8: 7 and thus won the series with a result of 4: 3.

This negative series of the Chicago Cubs was ridiculed in some films or used as a running gag , including in the feature film Back to the Future .

The Homer in the Gloamin '

On September 28, 1938, the Cubs played against the Pittsburgh Pirates . After the top half of the ninth inning , the score was 5: 5. Gabby Hartnett stepped to home plate in a dark Wrigley Field. The dark made the view worse and worse. After two outs , the referees were ready to end the game after the ninth inning. Hartnett hit a home run from Pirates pitcher Hurler Mace Brown into the darkness and haze in left center field. The "Homer in the Gloamin '" is one of the most famous walk-off home runs in baseball history.

On April 23, 2008, the Cubs won their 10,000 game against the Colorado Rockies . regular season win in their franchise history since the National League began in 1876. The Cubs hit the milestone with a National League record of 10,000 wins and 9,465 losses. Chicago is only the second club in major league baseball history to reach this milestone. The first team were the San Francisco Giants in the middle of the 2005 season. However, the Cubs believe the mark of wins for a team that always played in the same city. The Chicago club's 77-77 National Association record (1871, 1874-1875) is not on the MLB records. The post-season series is also not included in the totals. To honor the success, an additional white flag with the blue "10000" fluttered along with the usual "W" flag in Wrigley Field.

In his only fifth MLB game, the Cubs pitcher Kerry Wood managed 20 strikeouts against the Houston Astros on May 6, 1998 . This is the Cubs franchise record and major league record. The game is often referred to as the most dominant pitching feat of all time. Wood only allowed two valid hits ( base hits ), but missed a perfect game .

The Chicago Cubs hadn't won a World Series since 1908, nor had they reached it from 1945 to 2016. It is the longest losing streak in all four major American professional leagues, which includes the NFL, NBA, NHL and Major League Baseball. The Cubs losing streak has long competed with the history of the Boston Red Sox and the Chicago White Sox , both of which had waited over 80 years for another championship. The Boston Red Sox ended their 86-year lean period by winning the World Series in 2004, followed a year later by the Chicago White Sox with their 88-year triumph. On November 2, 2016, the Cubs finally managed to break the spell after 108 years.

With Back to the Future II , the Cubs' championship losing streak became more popular among non-baseball fans. After their journey through time from 1985 on October 21, 2015 , the protagonists of the film experience how the Chicago Cubs first won the World Series since 1908 - a success that the team also achieved in reality between 1989 (the Year of release of the film) and 2015 was not granted. In fact, on October 21, 2015, the Cubs were among the last four teams left in the 2015 Major League Baseball season , but were eliminated from the New York Mets on that day . On October 21, 2015, the ARD published a "special edition" of the Tagesschau , which reports on the alleged World Series triumph of the Chicago Cubs, but also on other fictional current events depicted in the feature film. A year later, in the fall of 2016, the Cubs actually won the World Series.

Glenallen Hill is the first and so far only player to hit a thrown ball on the roof of a five-story apartment building on Waveland Avenue. The home run against the Milwaukee Brewers was estimated at well over 500 feet (150 m).

No ball hit has yet hit the scoreboard. In 1948, Bill Nicholson narrowly missed the ad at Center Field when he hit a home run on Sheffield Avenue. In 1959, Roberto Clemente got even closer when he hit a home run on Waveland Avenue. In 2001, a punch from Sammy Sosa landed on Waveland Avenue and bounced one block down onto Kenmore Avenue. Dave Kingman hit a ball on May 17, 1979 that hit the third canopy on the east side of Kenmore Avenue, at an estimated 555 feet (169 m) this home run is cited as the longest in Wrigley Field history.

On July 30, 2014, the Cubs played against the Colorado Rockies. The game started at 7:15 p.m. on July 29th. After nine innings it was level 3–3, so the game was extended. In another six extra innings, neither team could achieve the decisive points for victory. The seventh -inning stretch was carried out in the 7th and 14th innings . In the lower half of the 16th inning, all bases were occupied when Batter Castro hit a sacrifice fly . The Catcher John Baker reached home plate and the Cubs won after 6 hours and 27 minutes into the game with 4-3. The game ended at 1:32 a.m. on July 30, beating the Cubs' previous record of 6 hours and 10 minutes, set August 17-18, 1982, in a 21-inning game against Los Angeles Dodgers . 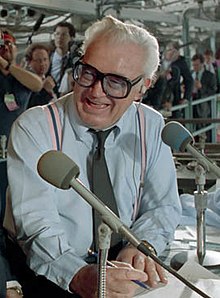 Harry Caray in his cabin at Wrigley Field - 1988

Harry Carry , former stadium announcer and radio commentator (March 1, 1914– February 18, 1998) became famous for his “seventh-inning stretch singing” from Take Me Out to the Ball Game . Caray sang the unofficial anthem of the sport of baseball with a handheld microphone and kept it out the window of his booth in the press area of ​​Wrigley Field. Caray began many of his performances while the Park Organ was playing the opening chord, addressing the baseball fans present, either about the state of the game or the Chicago weather. Then his trademark followed at the opening, “All right! Lemme hear ya! Ah-one! Ah-Two! Ah-Three! ”After his death, the singing is performed by various invited local and national celebrities.

No longer assigned back numbers

* Jackie Robinson's number is no longer assigned by an MLB team.

Due to the COVID-19 pandemic , the number of players in the active squad at the beginning of the 2020 MLB season on 23/24. July increased to 30 players. Two weeks later there was a scheduled reduction to 28 players. Another two weeks later, the number of players is to be reduced to 26 and maintained for the entire 2020 season. In the case of double-headers , the teams may appoint a 27th player to the active squad.