The Boston Red Sox ( Boston Red Sox ) are an American Major League - Baseball -Mannschaft from Boston , Massachusetts . You currently play in the Eastern Division of the American League . The club plays its home games in the Fenway Park stadium and has a loyal following. Although the fan base is strongest in the northeastern United States, there are a large number of fans scattered across the United States, which has earned it the name "Red Sox Nation".

The old Boston Huntington Avenue Grounds in the 1903 World Series

The team was founded in Toledo , Ohio , in 1893 and moved to Boston in 1900. In 1901 and 1902 they played under the name Boston Americans (referring to the American League). From 1903 to 1906 they played under the name Boston Pilgrims . It was also called The Bostons or simply Boston Baseball Club at the time. It wasn't until 1907 that the Red Sox received their official name. In 1912, the " Fenway Park " stadium, which is still in use today, was inaugurated in downtown Boston. The stadium was mentioned for the first time in 1904.

Until 1920, the Red Sox were the most successful team in the two major leagues. From 1903 to 1918 they won the World Series five times . In 1919, then owner Harry Frazee began selling some of the best players to the New York Yankees . Most significant was the sale in early 1920 by George Herman "Babe" Ruth , also known as "Bambino" and commonly recognized as the best baseball player of all time. The history of the two clubs has changed dramatically since the transaction.

Curse of the Bambino 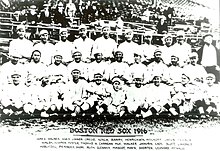 Red Sox 1916, in the team's most successful period

The so-called Curse of the Bambino became the catchphrase for the supposedly hapless fate of the Red Sox. The term was formed after Ruth's nickname. Looking back on the history of the franchise since 1920, this term became common for the marketing of books and television programs.

What is certain is that Boston won the 1915, 1916 and 1918 titles with the help of Ruth, whereas the Yankees have not yet played in the World Series. After Ruth was sold to the Yankees, their team won the World Series 26 times over the next few decades, whereas the Red Sox only won the title again in 2004. However, Ruth wasn't the only player to be sold and in 1921 the Red Sox coach was also taken over by the Yankees.

The legend is based mainly on the events and mishaps that led to the Red Sox losing the World Series several times or missing the playoffs:

George Herman "Babe" Ruth in 1914 with the Red Sox

In February 2002, John Henry and Tom Werner bought the Boston Red Sox, Fenway Park and 82% of a regional sports broadcaster for $ 660 million. At the same time, they assumed liabilities that amounted to over $ 400 million. That set a new record for the purchase of a major league baseball team. Theo Epstein became the youngest general manager in the major leagues at age 28. Together they managed to put together a team of superstars within the next two years. At the same time, the Red Sox became the second highest payroll team behind the Yankees.

Fans acted superstitiously to break this curse. In addition to burning various objects, this also included placing a Red Sox cap on the top of Mount Everest . There was also a myth that on midsummer solstice, just above home plate (the last time you have to reach a point) you would have to burn the old contract with which Babe Ruth was selling on the pitch in Boston's Fenway Park had been.

The curse has finally been broken since the Red Sox won the World Series in 2004. It is not known whether Ruth's contract was burned in 2004.

After the 2003 American League Championship Series against the Yankees, it was decided not to renew Grady's contract, and Terry Francona was hired . Epstein was able to sign Curt Schilling as a thrower in winter. He did not succeed in signing Alex Rodríguez . Rodriguez was currently considered the best player in the world and was ironically bought by the Yankees shortly thereafter.

At the end of the 2004 season, the Red Sox were three games behind the Yankees in the American League East, but were still able to secure participation in the playoffs through the American League wild card . In the first round they beat the Anaheim Angels there in three games. This was followed by another meeting with the New York Yankees. The Red Sox lost the first three games of the series and were 3: 4 behind in Game 4 in the 9th inning. The Red Sox succeeded in something that was normally reserved for their opponents: They drew level and won with the help of a 2-run home run by David Ortiz in the 12th inning 6: 4. The following evening they caught up again and won in the 14th inning 5: 4. Curt Schilling won the sixth game for the Red Sox. He had injured his ankle against Anaheim and was playing in severe pain; since he had only undergone a makeshift operation, his ankle began to bleed and his stocking turned red. The Red Sox won the decisive game 7 10: 3 and moved into the World Series. To date, it is the only time in the history of Major League Baseball that a team has caught up three games behind and - together with the four subsequent World Series games - won eight games in a row. This comeback was quickly hailed as the best of its kind in the history of professionally organized sport in the United States.

The opponents of the Red Sox in the 2004 World Series were the St. Louis Cardinals . They were also the ones who beat the Red Sox in the 1946 and 1967 World Series. However, the Red Sox also took this, more mental, hurdle and won their first title in 86 years in four games. On October 30th, the city of Boston held a parade that attracted over three million people despite the rainy weather. As one of only a few teams at all the Red Sox after winning the championship of the magazine were Sports Illustrated for Athlete of the Year chosen.

In the following season (2005), the Red Sox lost as reigning champions in the first round of the playoffs with three out of three games against the Chicago White Sox (a so-called sweep or clean sweep for the White Sox). In 2006 only the third division place was achieved and thus the postseason was missed.

In 2007, however, the Red Sox won the World Series with a 4-0 win against the Colorado Rockies , after they had previously beaten the Los Angeles Angels of Anaheim 3-0 and the Cleveland Indians 4-3 .

In 2008 the Red Sox could not defend their title again. They reached the wild card in the AL East behind the Rays and thus the postseason and were able to safely reach the American League Championship Series against the Los Angeles Angels , but were subject to the Tampa Bay Rays in seven games.

In 2009 , the postseason behind the Yankees was also reached via the wild card rule, but there the season ended with a clear 3-0 defeat against the Los Angeles Angels of Anaheim .

In the 2010 season , the Sox had to admit defeat to both the Yankees and the Rays in the division after a series of injuries to important players, thus missing the postseason for the first time since 2006.

In 2011 , in the last month of the season, despite a lead with nine games, the post-season place believed to be safe was lost to the great disappointment of the fans with only seven wins and 20 defeats, which led to the separation from long-time manager Terry Francona. 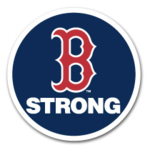 After the RedSox finished the 2012 season as bottom of the AL East Division, they closed the 2013 season under the new manager John Farrell , the former pitching coach, with 97 wins to 65 losses. That was the best result in the entire American League and secured them home rights in the first few games of the postseason. In the AL Division Series , the Red Sox defeated the Tampa Bay Rays 3–1 and won the AL Championship with a 4–2 over the Detroit Tigers . On October 30, 2013, the team celebrated their 8th title win in the 6th game of the 2013 World Series in Fenway Park . They won the series 4–2 against the St. Louis Cardinals , the same opponent as in the 2004 World Series . For the Boston Red Sox, reaching the World Series was particularly emotional, as the city of Boston had been traumatized by the attack on the Boston Marathon a few months earlier. At home games of the Red Sox the pattern “B Strong” (Boston Strong, German: “as strong as the city of Boston”; but at the same time also Be Strong, German: “Be strong”) was mowed in the lawn of Fenway Park which the city of Boston showed its attachment to the victims.

Numbers that are no longer assigned

Fenway Park : Red Sox no longer assigned numbers (as of 2009)

Current squad of the Red Sox

Due to the COVID-19 pandemic , the number of players in the active squad at the beginning of the 2020 MLB season on 23/24. July increased to 30 players. Two weeks later there was a scheduled reduction to 28 players. Another two weeks later, the number of players is to be reduced to 26 and maintained for the entire 2020 season. In the case of double-headers , the teams may appoint a 27th player to the active squad.

After the 1907 season, the Red Sox got their current nickname. Since it was founded in 1901, the Boston team has had no other name. Most newspapers dubbed them The Bostons or Americans , since Boston was a city with two major league teams. Previously used names such as Boston Pilgrims , Boston Puritans , Plymouth Rocks or Somersets after the owner of the Red Sox cannot be maintained according to the current state of research.