from Wikipedia, the free encyclopedia
This is the spotted version , flagged on July 22, 2019 . There is 1 pending change that has yet to be viewed.

The Pittsburgh Pirates are an American baseball team. The team plays in the Central Division of the National League .

Today's franchise goes back to the Pittsburgh Alleghenies (or Alleghenys) team who joined the National League in 1887. The name Allegheny refers to the neighboring town of Allegheny , which has been incorporated into Pittsburgh since 1907. Previously, this franchise had played professional baseball since 1882 in the American Association , a rival major league . From 1891 the team is run as Pirates .

The first great success came in 1901 when the first Pennant, i.e. the championship in the National League, was achieved. This success could be repeated in the next two years. As a result, the Pirates also took part in the first World Series ever in 1903 , which was lost to the Boston Red Sox . The manager Fred Clarke , who is also active as a player and who was in charge of sporting fortunes from 1901 to 1915, is particularly responsible for these successes . The outstanding Pirates player of this time is the shortstop Honus Wagner , who has remained loyal to the Pirates. This trust was rewarded in 1909 with the next NL title and the first World Series title.

After a long dry spell, the next NL Pennant could be won in 1925 and 1927, and in 1925 also linked to winning the World Series. When they won the World Series, the Pirates were the first team to win the best-of-seven series after falling 1: 3 behind. In the following years, however, the Pirates could no longer intervene decisively in the fight for the NL title; by 1945 only three second places can be reported.

However, the Pittsburgh Pirates experienced a real decline after the Second World War . Between 1947 and 1957 they finished last seven times in the eight-team National League. An upcoming star as an outfielder, Roberto Clemente , has also played in the team since 1955 . From then on, Clemente would help shape the fate of the franchise until his death in 1972. After a second place in 1958, the first NL title in 33 years came in 1960 and also won the World Series against the New York Yankees . This was in return for the 1927 defeat by the Yankees.

After switching to two divisions, the Pirates were able to win their (East) division six times between 1970 and 1979. Although the final for the title in the National League was lost four times during this time, with the NL titles in 1971 and 1979 and the subsequent World Series wins, this period was at least as successful as the beginning of the century. For 1979, the comeback in the World Series against the Baltimore Orioles after 1: 3 deficit is worth remembering and the performance of 39-year-old veteran Willie Stargell , who also became World Series MVP , is worth remembering .

The title win in 1979 remained without an adequate successor. In the years 1990 to 1992 division titles of the still semi-divided league could be won, but in these years the team went as a loser in the final of the National League. What has followed since then is a record even in the long-lived US baseball sport: The Pirates have not been able to end a season with a positive balance since the 1993 season. After the end of the 2009 season, now 17 seasons with more defeats than wins surpass the previous record of the Philadelphia Phillies , which ended in 1948 after 16 years. 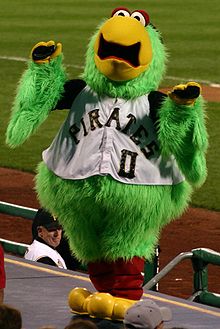 In the 2010 season, which began in April, things got worse for the home fans on April 23, 2010: The Pirates suffered their highest defeat in 124 years of franchise history in the 0-20 against the Milwaukee Brewers . The series of seasons with more defeats than wins ended in 2013 after 21 years. Following the success of the Toronto Blue Jays in the 2015 season, the Pirates are the only MLB franchise without a Division Series success.

The team plays its home games at PNC Park . The Pirates have had their winter home in Bradenton , Florida since 1969 and play there in the preseason at the local McKechnie Field .

The "Pirate Parrot" ( German  "Pirate Parrot" ) has been the pirates' mascot since 1979. The idea comes from "Captain Flint", Long John Silver's parrot from the book Treasure Island by Robert Louis Stevenson . Even before the games, the mascot runs back and forth on the field and also arouses joy, especially among the children, with funny clips on the big screen. During the game, they usually run around on the dug-out or in the rows of spectators, sit on spectators and dance. He also helps with spectator attractions between innings like “shooting in the air” hot dogs and t-shirts.

Numbers that are no longer assigned