This article covers the city in Indiana. For other meanings, see Indianapolis (disambiguation) .

Indianapolis [ ˌɪndɪəˈnæpəlɪs ] is the capital of the US state Indiana in the United States of America . The 2020 census counted 887,642 residents in Indianapolis, making it the second largest city in the American Midwest . The Indianapolis Metropolitan Area (Indianapolis plus suburbs) has around 2,100,000 inhabitants (as of 2020). Indianapolis is the administrative seat of Marion County .

Indianapolis was founded in 1821 at the request of the State of Indiana. The aim, as in the case of Washington DC at the federal level, was to create a central capital. Indianapolis was built on the model of Washington, that is, all streets lead to the center of the city, the Monument Circle. The rise to the economic center of Indiana had to wait until the city was opened to the railroad in 1847. As a transportation hub between Chicago , St. Louis , Columbus and Cincinnati , the city grew rapidly. Today it is not only the political but also the undisputed economic center of India. 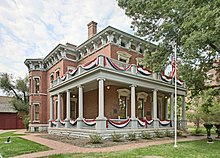 Eight structures and sites in Indianapolis have National Historic Landmark status , including the home of former President Benjamin Harrison , the Indiana World War Memorial Plaza and the Athenæum (Das Deutsche Haus) . 228 buildings and sites in the city are listed on the National Register of Historic Places (NRHP) (as of November 3, 2018).

The following table shows the population development of the Metropolitan Statistical Area Indianapolis - Carmel - Anderson according to the definition of the US Census Bureau 2015: 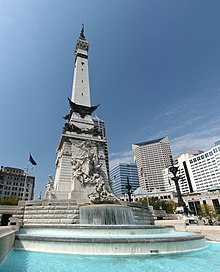 Indianapolis is also called "Circle City". The city owes its name to the Monument Circle in the city center. The memorial honors the fallen soldiers of the American Civil War and the Mexican-American War . Another war memorial is also located in the city center, the War Memorial Plaza . It was built in honor of the fallen soldiers of the two world wars . There is also a national monument to the USS Indianapolis .

The city's nightlife is mostly found in Broad Ripple in the north of the city.

Attractions also include the Children's Museum and the Indianapolis Museum of Art . The speedway has its own museum, the "Indianapolis Speedway Hall of Fame".

The city is home to one of the great US orchestras, the Indianapolis Symphony Orchestra . 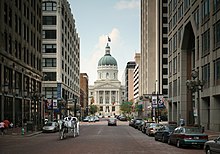 The incumbent mayor is the Democrat Joe Hogsett . Indianapolis has long been considered relatively conservative for a large city; the Democrats were less dominant than in other large cities. This has now changed. Since the 2004 US presidential election , when the city was a blue (democratic) island in red (republican) Indiana and voted for John Kerry , Marion County or Indianapolis has always voted for the Democratic presidential candidate. This has to do with the increasing urban-rural polarization, which has seen the Democrats succeed in urban areas and Republicans in the countryside. Former majority democratic areas in rural southern Indiana are now firmly in Republican hands, while Indianapolis has become a democratic stronghold. In the 2020 United States presidential election , 63.35% of Marion County's voters voted for Joe Biden and 34.30% of voters for Donald J. Trump .

There are the following universities:

Most teenagers attend Indianapolis Public Schools (downtown school district) or equivalent schools on the outskirts of the city.

The Indianapolis metropolitan area generated a gross domestic product of 135.4 billion US dollars in 2016, making it 26th among the greater metropolitan areas of the United States. The unemployment rate in the metropolitan region was 3.0 percent and was thus below the national average of 3.8 percent (as of March 2018). The personal per capita income was $ 49,681 in 2016, which means Indianapolis has an above-average income level. 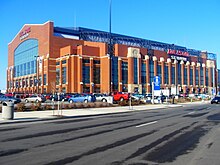 Indianapolis is also home to the Indiana Ice , a junior hockey team from the USHL . Before that there was also a professional team, the Indianapolis Ice , which played in the IHL until 2001 and then in the Central Hockey League until 2004 .

The Pan American Games in 1987, the World Police and Fire Games in 2001, the Basketball World Cup in 2002 and the Super Bowl XLVI all took place in Indianapolis.

→ Main article : List of sons and daughters of the city of Indianapolis

Wikinews: Indianapolis  - on the news

Places in the Indianapolis Metropolitan Area