The title of this article is ambiguous. Further meanings are listed under Cincinnati (disambiguation) .

Cincinnati [ ˌsɪnsɪˈnætɪ ] (German-speaking outdated Zinzinnati ) in the US state of Ohio is one of the most important trading and manufacturing cities in the United States , known as the "Queen of the West". It is the administrative seat of Hamilton County . At the 2010 census it had 296,943 inhabitants. The greater Cincinnati area extends into the neighboring states of Kentucky and Indiana and has a population of nearly two million.

Cincinnati is located in the state triangle of Ohio, Indiana and Kentucky on the right bank of the here 600 m wide Ohio River on two terraces (16 and 33 m above the highest water level), the upper one of which rises gradually to the Auburn Hill and other hills, the, of country houses and vineyards, enclose the city in a large semicircle and reach a height of 142 m. The Mill Creek crosses the 201.9 square kilometers comprehensive urban area, of which 4.1 km² of water eliminated.

Miami and Erie Canal in Cincinnati, 1914

Cincinnati was founded in 1788 as one of the first permanent settlements in what was then the Northwest Territory on the site of the former Fort Washington under the name Losantiville. The first settlers were emigrants from New England and New Jersey .

The current name of the settlement is derived from the Society of the Cincinnati , founded by many German mercenary officers in 1783 , of which George Washington was a member and first president ; the war veterans chose the name in memory of Lucius Quinctius Cincinnatus (519-430 BC), an exemplary military leader of ancient Rome .

In 1814 the place received an urban constitution. During the slavery and civil war , Cincinnati was an important transit station for the underground railroad movement, which had set itself the goal of enabling "fugitive" slaves to enter Canada .

Since 1850, a large number of immigrants from northwest Germany came to Cincinnati, which can still be recognized from the family names. In 1880 the city had more than 255,000 inhabitants, of which over 112,000 (44%) were first and second generation German-Americans. In the early 20th century, the city had a German population of 60%. The German-speaking immigrants are assigned great importance for the economic development of the city.

The former German immigrant district Over-the-Rhine was considered a problem area of ​​the city at the beginning of the 21st century and, according to press reports, was even referred to as “America's most dangerous neighborhood” between 2005 and 2007. Hundreds of millions of dollars have been invested in revitalization projects since 2004 and Over-the-Rhine was experiencing a renaissance. Today Over-the-Rhine is one of the most sought-after residential areas in the city.

Cincinnati is the seat of the Anglican Diocese of South Ohio with the Christ Church Cathedral and the Roman Catholic Archdiocese of Cincinnati with the Cathedral of St. Peter in chains .

Among other things, the companies General Electric with their center for aircraft propulsion , Procter & Gamble , which were founded in Cincinnati in 1837, as well as numerous large national companies such as Kroger , Fifth Third Bank , Macy’s and Chiquita Brands International are based here.

The University of Cincinnati has a considerable collection of writings that are important for German-American relations, especially for the history of immigration from Germany to Cincinnati. ( Ref : Tolzmann)

Cincinnati has a number of museums that are devoted to a wide variety of topics. The Cincinnati Museum Center at Union Terminal has established itself in the city's main train station , with theaters and a library as well as the Cincinnati History Museum , the Natural History & Science Museum and the Duke Energy Children's Museum . The German Heritage Museum is dedicated to immigrants of German origin, the American Classical Music Hall of Fame and Museum focuses on classical music tradition , neon signs are collected in the American Sign Museum and the Cincinnati Reds Hall of Fame and Museum shows the history of the local baseball team, the Cincinnati Reds . In addition, the Harriet Beecher Stowe House is a memorial dedicated to the writer Harriet Beecher Stowe in her former home. Similarly, the William Howard Taft National Historic Site set up in the house where William Howard Taft was born commemorates the former US President. The Taft Museum of Art goes back to his half-brother Charles Phelps Taft , in which an important art collection with works by European painters such as Rembrandt van Rijn , JMW Turner and Jean-Baptiste-Camille Corot can be seen. The city's largest art museum is the Cincinnati Art Museum with extensive collections from ancient times to the present from various regions of the world. The Contemporary Arts Center , the construction of which was designed by Zaha Hadid , also shows modern art .

The Oktoberfest in Cincinnati is the largest in the whole of the USA and probably the most noticeable expression of German-American culture.

The Cincinnati Zoo and Botanical Garden , founded in 1875, is the second oldest zoo in the United States. It extends over around 26 hectares in the center of the city. In May 2016, the zoo made negative headlines when a four-year-old boy got into the gorilla enclosure and Gorilla Harambe was killed to protect the boy. In January 2017, the hippo Fiona was born in the zoo and gained worldwide popularity from August 2017 through videos on Facebook . 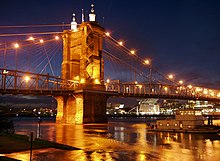 → Main article : List of famous people from the city of Cincinnati