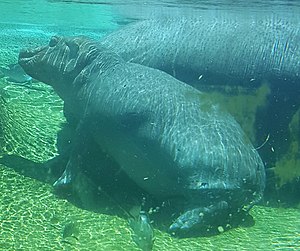 Fiona with her mother Bibi

Fiona is a female hippopotamus ( Hippopotamus amphibius ) that was born on January 24, 2017 at the Cincinnati Zoo and Botanical Garden . Since August 2017, videos of the hippopotamus can be seen on the Internet, which received worldwide attention and triggered a "Fionamania". Fiona is the first hippo to have prenatal ultrasound images .

Birth and first year of life

The hippopotamus bull "Henry" spent over 30 years at Dickerson Park Zoo in Springfield , Missouri , and was relocated to Cincinnati in June 2016 . The Flusspferdkuh "Bibi", born in 1999, came in the same year from the Forest Park of St. Louis located St. Louis Zoo to Cincinnati. There they were housed in the newly built "Hippo Cove" after the zoo had not kept hippos for 20 years. On January 24, 2017, the calf of the two hippos was born six weeks early; it weighed only 13 kilograms. The normal gestation period for hippos is around eight months and the birth weight should be between 25 and 54 kilograms.

The zoo team named the young animal “ Fiona ” because of the similarity of its ears to those of the female main character of the same name from the film series Shrek , as well as referring to the origin of the name from Gaelic fionn [ fjũːɴ ] “white; beautiful".

Fiona is the first hippo calf in 75 years to be born in the Cincinnati Zoo, the second oldest in the United States, founded in 1875. Because it was premature, it was cared for around the clock with the help of nurses from the Cincinnati Children's Hospital . Hippo calves at full term can stand and run immediately after birth, which was not the case with Fiona; it was feared that the weak young would not survive. It was fed a mixture of its mother's milk and supplementary bottle feeding. A few weeks after its birth, it got its first teeth, refused the bottle and dehydrated , which is why specialists from the Cincinnati Children's Hospital placed a venous catheter for artificial feeding .

On February 5, 2017, Fiona took her first steps. When she was introduced to the media on May 31st, she weighed 125 kilograms. In June 2017, she reached a normal weight of 144 kilograms for her age and in August 2017 she weighed 250 kilograms. In June 2017 she was successfully reunited with her parents. At the end of October 2017, Fiona's father Henry had to be put to sleep after a long illness at the age of 36. On her first birthday on January 24, 2018, Fiona already weighed more than 297 kilograms. For safety reasons, the full-time carers have only been handling Fiona through metal barriers since around mid-December 2017 due to her size, her high weight of over 297 kg and the potential danger to humans .

Since the mother animal Bibi was used to being touched by humans, ultrasound examinations were possible for the first time on a large hippopotamus. He had been taught to voluntarily stand still in a metal box, the wide spacing of which allowed direct contact by the veterinarian and nursing staff. Fiona is said to be the first hippopotamus in the world to have an ultrasound performed prenatally and to record its prenatal development through weekly sonographies. Although the examinations had already been carried out since August 2016, clear ultrasound images were only obtained at the beginning of January 2017 with the lowering of the uterus.

Since the calf could not be nursed because of its initial weakness, Jessye Wojtusik, postdoctoral fellow at the zoo's Center for Conservation and Research of Endangered Wildlife, zoo nutritionist Barbara Henry and scientist Michael Power at Smithsonian's Milk Repository in Smithsonian's National Zoo helped develop Fiona's keepers have their own care concept, as there were no reports from other zoos on hand-rearing hippos. In addition, Wojtusik and later the keepers in the zoo milk a hippopotamus for the first time. For the first time, Michael Power was able to determine the exact composition of the breast milk of hippos and nutrient fluctuations by examining the samples from day 1, 3, 8 and 9. Until then, the scientists only had an imprecise research report from 1959, which also stated that the fat content of milk was too high. Power found that the milk is very rich in protein, relatively low in sugar and fat, and similar to that of anteaters.

Based on this composition, the bottle-feeding was produced in order to optimally supply it with nutrients, in addition to the bottle-feeding with the milk milked twice a day, which was not sufficient to fully feed the calf. The formula for making food was varied based on observations by zookeepers and veterinarians about weight gain or loss, energy levels, blood counts and digestion of the calf. The experiences and findings are summarized in a handbook that is also intended to serve as a guide for other zoos when it comes to hand-rearing hippos.

In addition, a small portion of the milk has been made available for further analysis to the Smithsonian's Milk Repository , which houses the largest collection of exotic animal milk in the United States, with 15,000 milk samples from at least 130 different mammal species. For example, based on the milk samples taken at the Smithsonian's National Zoo & Conservation Biology Institute, research will be carried out into how nutrient content and composition change during the suckling period. In addition, Bibi's milk will be compared with that of other female hippos in order to find out specific differences.

Starting in August 2017, new videos were published weekly on the initiative of Facebook (there The Fiona Show ), which had 27 million views by January 2018 and over 1 million followers in June 2018. The number of video clicks at the zoo rose from eight to 106 million in six months. The photo of a young man who proposed marriage to his girlfriend in front of Fiona's water basin spread in the media around the world, while the animal looked on apparently approvingly through the glass pane. The media described this as photobombing . There are also numerous merchandise products with the slogan Team Fiona and the image of Fiona. A local brewery launched a Team Fiona beer and donated 25 percent of sales to the zoo, raising $ 30,000 by November 2017. Several books have been published about Fiona so far, including the children's book Saving Fiona , written by the zoo director Thane Maynard .

Media critics such as Delaney Ross are rather skeptical about media presentations by zoo animals. On the one hand, zoos could use such campaigns to draw attention to special, endangered animal species - hippos like Fiona are classified as "endangered". The increased media attention to individual zoo animals also increases the number of visitors and income of the respective zoo or animal park. However, such facilities are in a certain way also detrimental to the mental and physical condition of the animals, as the conditions in the enclosure often do not even come close to the natural conditions of the animals' home. In addition, it should be questioned what the respective zoo really does with the income from media hype and merchandising.

The media hype about zoo animals is sometimes seen as tasteless. For example, live broadcasts of the birth of the giraffe lady “April” on YouTube and other video portals were so strongly criticized that they had to be removed again. The reason given by critics was that such images were "vulgar" and "exploitative".

Rebecca Lewison, ecologist at San Diego State University and chairwoman of the Hippo Specialist Group of the IUCN (International Union for Conservation of Nature and Natural Resources; German "International Union for the Preservation of Nature and Natural Resources") sees no major disadvantage in the humanized representation Fionas, but not a big advantage for wild hippos either. The public has a lot of “hippopotamus enthusiasm”, which is not reflected in support for the protection of wild hippos.