This article explains the US state of Missouri; for other meanings, see Missouri (disambiguation) .

The State Missouri (standard language [ mɨzɝi ] or [ məzɝə ]; also [ mɨzʊəɹi ] or [ məzʊəɹi ]) is a US state of Midwest of the United States . The capital is Jefferson City . The common abbreviation for the state is MO . Missouri was named after the Missouri River, which in turn takes its name from the Missouri Indian people . The word Missouri comes from their neighbors, the Illinois people , whom they call wi-mihs-oor-ita , which means "the one with the wooden canoes". The University of Missouri and Missouri State University state colleges are located in the cities of Columbia and Springfield . Both the Mississippi and the Missouri flow through the state.

Missouri has the most riparian states on par with Tennessee . In the north, Iowa , in the eastern Illinois (beyond the Mississippi), Kentucky and Tennessee , in southern Arkansas and western Oklahoma , Kansas and Nebraska (beyond the Missouri River ).

North of the Missouri are the northern plains that extend into Iowa, Nebraska, and Kansas. The Ozark Plateau lies south of the river and extends into Arkansas and Oklahoma. Springfield, Missouri , is the third largest city on the plateau in the southwest of the state .

The two largest cities, Kansas City and St. Louis , are each centrally located on the western and eastern borders of the state and each form parts of the interstate metropolitan regions of Kansas City and Greater St. Louis .

At the beginning of the American Civil War , it had the sympathizers of the Northern states, which were composed here to a large extent of German immigrants, managed to expel the pro-south set governor and the majority of the members of the State Parliament and Missouri, further to the slavery known to keep in the camp of the Union states. The governor, who had fled, and some of the parliamentarians then announced the secession of Missouri from their exile. On November 28, 1861, Missouri officially became the 12th state in the confederation . Although the Union forces and their supporters, who made up about two-thirds of the population, controlled most of the state, they could not prevent Missouri from becoming the scene of a cruel war of pro-southern guerrillas, the Bushwhacker , against Union troops and the irregular combat units supporting them. In the years that followed, large areas of the state were transformed into a no-man's-land, where attacks from ambushes, arson and indiscriminate murders of real and supposed sympathizers of the opposing war camp dominated everyday life. Following the Lawrence Massacre , the Union Forces Commander in Missouri, General Thomas Ewing, Jr. , issued General Order No. 11 , with which the forced evacuation of four counties (they correspond to the German counties) along the border with Kansas was ordered. The forcible eviction of around 10,000 people aimed to withdraw potential supporters from the southern rebels, but at the same time large swaths of Missouri became wilderness again for years to come. It was not until January 1865 that a new state government was elected in Missouri. Until then, a pro-northern state convention had exercised power in the state.

Missouri is also popularly called the Show-Me State , although the origin of this phrase is not entirely clear. The phrase became famous through the speech given by Missouri's representative to the United States House of Representatives Willard Duncan Vandiver , who said at a banquet in Philadelphia : "I come from a state that raises corn and cotton and cockleburs and Democrats, and frothy eloquence neither convinces nor satisfies me. I am from Missouri. You have got to show me. " Today, the phrase mainly serves the cliché that the people from Missouri are steadfast, conservative and suspicious.

The capital of Missouri is Jefferson City . The current governor is Republican Mike Parson . Missouri has eight MPs in the House of Representatives .

The current Missouri Constitution, the fourth of the state, was passed in 1945 and embodies the separation of powers . The legislation is through a bicameral place: by a House of Representatives and a Senate. Together they form the Missouri General Assembly .

Since Missouri is located in the center of the country and, politically speaking, has north / south and west / east differences and both large cities and rural areas, the state was often considered a "Bellwether" (German: "Leithammel", "Indicator") for the overall mood of the United States (known as the Missouri Bellwether ). From 1904 to 2004, with the exception of 1956 , Missouri always voted for the presidential candidate that was victorious in the end, making it a classic swing state . Since 1996, however, the state has not won a democratic candidate, which is why Missouri is now a red state (stronghold of the Republicans); so was Mitt Romney 2012, the ten electoral votes by a margin of more than nine percentage points ahead of Barack Obama winning.

In its southeastern areas, Missouri is also characterized by the foothills of the Bible Belt . Missouri was initially strongly republican under the administration of George W. Bush . In the 2006 Senate elections, Democrat Claire McCaskill won a neck-and-neck race against Republican rival Jim Talent , but after the 2010 House of Representatives elections six of the nine MPs were members of the Republican Party. In the 113th Congress Missouri lost a mandate; this was at the expense of the Democrats, who now only have two MPs. In Electoral College , Missouri has had ten votes since 2012, compared to twelve in 1984.

In Missouri, both absolute and relative, the death penalty is often pronounced and carried out.

With 88 executions - 20 of them in 2013-2017 - Missouri ranks fifth among the states with the highest number of executions in the United States, after Texas, Oklahoma, Virginia and Florida. The last one took place in 2017.

In June 2017, the National Association for the Advancement of Colored People issued a travel warning to Missouri due to the numerous racial incidents, racial profiling by the police, and a new law in the state making racial discrimination more difficult . This was the first such travel warning for a US state. It says u. a .:

Individuals traveling in this state should do so with extreme caution. Crimes of race, gender, and color have a long history in Missouri. Missouri, the home of Lloyd Gaines and Dred Scott , the dubious honor of the Missouri Compromise , and one of the last states to become a history of slavery may not be safe ... SB 43 Bill legalizes individual discrimination and harassment in Missouri and would prevent people of Missouri from protecting themselves from discrimination, harassment, and revenge. In addition, overzealous punishment for minor highway code violations has resulted in African-Americans being stopped 75% more often than whites.

In May 2017, Tory Sanders, an African-American, died in a prison in southeast Missouri after guards treated him with pepper spray and tasers. Sanders had been arrested after getting lost and had not been charged with any crime. Law SB 43 is referred to by critics as the " Jim Crow Law ". 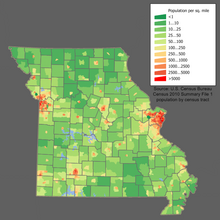 6.1% of Missouri residents speak a language other than English at home.

The religious communities with the largest number of members in 2000 were the Catholic Church with 856,964, the Southern Baptist Convention with 797,732 and the United Methodist Church with 226,578. About 20% of the population are of the Roman Catholic denomination; especially in the Kansas City and St. Louis areas. Baptists , Methodists and Lutherans - among which the Lutheran Church - Missouri Synod plays a significant role - are among the Protestant denominations. Independence near Kansas City is considered by the Mormons as the future New Jerusalem , especially supporters of the smaller Mormon churches are concentrated there. 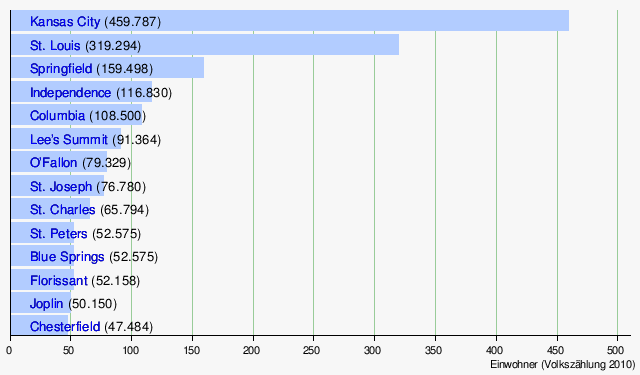 The most important branches of industry are aviation technology, logistics, agriculture and the food industry, chemistry, printing industry, electronics.

In southeast Missouri in the fertile plains of the Mississippi, cotton and rice are grown.

Missouri has large reserves of limestone . Other natural resources are lead and coal . The construction industry is supplied with cement and gravel from here .

Tourism and services are other important industries.

Counties in the US state of Missouri