The Johnston Atoll (old name Cornwallis Island ) is an atoll in the northern Pacific Ocean , 1150 km southwest of Hawaii . The archipelago belongs politically to the United States and is counted by these as so-called "non-incorporated territory" to the United States Minor Outlying Islands .

The 2.67 km² archipelago consists of the two heavily man-made islands Johnston Island and Sand Island as well as the two artificial islands Akau in the north and Hikina in the east. A coral reef lies in front of the islands in the northwest . The area of ​​the lagoon is 130 km². There are no natural freshwater springs on the atoll. The main island of Johnston Island had around 317 inhabitants until 2004, mainly US military, but is now uninhabited. The atoll is only a few meters above sea ​​level , the highest point protruding just five meters from the water. The climate is hot, dry and windy year round, with northeast trade winds predominating. In the 19th century, the extensive guano deposits that were previously used as fertilizer were removed. 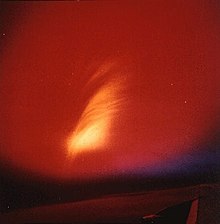 The aurora of the Starfish Prime nuclear test 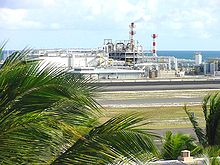 The JACADS system for the disposal of chemical warfare agents

Rockets for high-atmospheric tests of hydrogen bombs were also launched from Johnston Island . For example, on August 1, 1958, as part of Operation Hardtack, a Redstone rocket with a 3.8 megaton warhead was launched for the purpose of a nuclear weapon test at an altitude of 77.8 km. Further rockets for high-atmospheric atomic bomb tests were launched from Johnston Island on August 12, 1958 at an altitude of 43 km and on July 9, 1962 as part of Operation Starfish Prime (as part of Operation Dominic ), the EMP occurring numerous electrical and electronic devices on Oahu (Hawaii) bothered.

This launch should have been carried out on June 20, 1962, but then the rocket exploded at a height of 10 km. The neighboring Sand Island was contaminated with plutonium . During a launch attempt on July 26, 1962, the rocket with the nuclear warhead exploded on the launch pad, destroying it and contaminating the surrounding area with plutonium. This led to an almost quarter-year break in experiments. These were resumed on October 16, 1962, but again failed. The Thor DSV-2E missile exploded at a height of 10 km, with some fallout from falling on Johnston Island.

More rockets for the purpose of high-atmospheric nuclear bomb tests were launched:

After above-ground nuclear weapons tests were no longer possible, numerous research rockets (also for civil research) were launched from Johnston Island at heights of up to 1148 km until 1975 .

The island served as a warehouse for chemical warfare agents such as sarin and Agent Orange from 1971 . At the end of the 1980s, a plant, the Johnston Atoll Chemical Agent Disposal System (JACADS) , was built on the island for the combustion of chemical warfare agents and dismantled again in 2003 after the completion of the measures. In the early 1990s , chemical weapons previously stored in the Palatinate were also destroyed in the course of the Lindwurm campaign .

In 2005 the atoll was offered for sale by the General Services Administration (GSA), but the offer was withdrawn due to an environmental impact statement .

Johnston Atoll Airport (ICAO code PJON ) has been out of service since 2005 and can only be used for unscheduled emergency landings.

Since January 6, 2009, the nature reserve of the Johnston Atoll has formed the Pacific Remote Islands Marine National Monument together with six other American islands in the Pacific .

Political division of Australia and Oceania