This article is about an annular reef. See also: atoll media , Atoll Nunatakker or Atoll K . 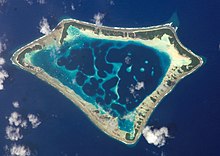 The Atafu atoll, made up of more than 40 motus

An atoll is a ring-shaped reef , usually a coral reef , that encloses a lagoon . The word atoll comes from Dhivehi , the language of the Maldives ( އަތޮޅު atolhu ). The coral reef forms a fringe of often extremely narrow islands , which are usually referred to as motu after the Polynesian word for "island" . In the lagoon, remains of the former volcanic peaks can still rise above sea ​​level as islands .

Development phases of an atoll after Darwin

According to Charles Darwin's (1809–1882) theory, atolls are formed from fringing reefs that are formed around a volcanic island . The island can sink into the sea over time, be it through erosion or because the seabed is sinking or sea level is rising, with the reef growing further upwards. In the end, only the reef extends to the surface of the water and forms a ring of small islands.

Another theory by the Austrian zoologist and marine researcher Hans Hass (1919–2013), on the other hand, manages without volcanoes. According to her, atolls form from conical reefs , where the corals in the center die off due to insufficient water supply and only the corals at the edge continue to grow, so that a ring-shaped structure is also created.

Subsequent impacts (rise in the earth's crust, fall in sea level) can cause an atoll to "rise" and the lagoon enclosed by the coral ring to a large extent, sometimes even completely, dry out. One then speaks of an “upscale atoll”. Examples are Niue , Nauru or Henderson Island .

Kiritimati , the atoll with the largest land area

Atolls occur exclusively in tropical waters, mainly in the Pacific Ocean and Indian Ocean . In the Caribbean there are only four atolls. The Maldives form a state that consists only of atolls .

The northernmost atoll is the Kure Atoll northwest of Hawaii at 28 ° 24 'N. Br., The southernmost is the Ducie Atoll of the Pitcairn Islands at 24 ° 41' s. Br. Atoll-like structures further south can be found at the mostly submarine Elizabeth Reef in the Tasman Sea at 29 ° 58 's. Br.

The Maldivian atoll Thiladhunmathi-Miladummadulhu (two names, but geographically one atoll) has the largest total area (lagoon and reef) with 3,850 km² . 51 km² of this is land area. The largest contiguous atoll structure is the Great Chagos Bank in the Chagos Archipelago with a total area of ​​12,642 km², with only 4.5 km² of land. The submarine Saya de Malha Bank , a ring-shaped coral reef that lies entirely below sea level and is therefore not classified as an atoll, has a total area of ​​around 35,000 km² (excluding the separate northern Ritchie Bank).

The atoll with the largest land area is Kiritimati in the Pacific island state of Kiribati with 321 km², followed by Aldabra ( Seychelles ) with 155 km².

However, many atolls have little land area and no natural freshwater sources and are therefore uninhabited islands .

The inhabitants of many atolls are concerned for their livelihoods due to the feared rise in sea levels as a result of global warming . The increasing UV radiation due to the thinning ozone layer is also suspected of disrupting the growth of the corals. The steadily increasing CO 2 concentration in the atmosphere also causes acidification of the seawater near the surface. The carbon dioxide dissolves in the sea water to form hydrogen carbonate , which attacks the lime that gives the reef its stability.

Portal: Islands  - Overview of Wikipedia content on the topic of islands