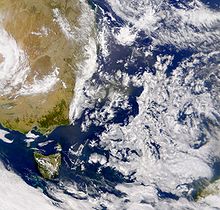 Satellite photo of the Tasman Sea

Map of the Tasman Sea

As Tasman or Tasman Sea water area between is Australia and New Zealand , respectively. It is a southwestern part of the South Pacific . The name honors the Dutch explorer Abel Tasman , who went on a voyage of discovery in 1642/1643 and discovered New Zealand and Tasmania in the process. Around 1770, the British explorer James Cook explored the area during his first voyage of discovery.

The International Hydrographic Organization counts the areas east of the Australian states of New South Wales , Victoria and Tasmania as part of the Tasman Sea . Queensland , located further to the north , is connected to the Coral Sea . The border between the states also serves to demarcate these two seas .

The Tasman Sea contains a number of archipelagos that are remote from the coastal islands of New Zealand and Australia:

These islands all belong to Australia .