Victoria (formerly German also Viktorien ) is a federal state in southeast Australia . The capital is Melbourne . In terms of area, Victoria is the smallest state on the mainland and has the second highest population with around 6.6 million inhabitants. This means that Victoria has the highest population density of all Australian states. Victoria borders New South Wales to the north and South Australia to the west . To the south, Victoria borders the Bass Strait , which separates mainland Australia from the state of Tasmania .

Victoria has a share in four major landscapes: the Murray Basin in the north, the southern highlands, the Great Dividing Range on the border with New South Wales and the narrow coastal plain in the east. The Great Road Ocean with the rock formation "Twelve" ( Twelve Apostles ) leads along the south coast.

The climate is Central European to Mediterranean. In the mountains there are mainly eucalyptus forests , which can be covered with snow in the relatively mild winter. Winter sports are possible on Mount Buller in the Australian Alps . The Kangaroo Hoppet , a cross-country skiing, takes place here. The highest point is the mountaintop of Mount Bogong at 1986 m above sea level. Victoria covers an area of ​​227,420 km 2 .

On Phillip Island , near the Mornington Peninsula, little penguins (Eudyptula minor) can be seen year-round as part of a well-developed and organized visitor center, the proceeds of which are used to maintain the penguin population.

According to the Australian Climate Council, Victoria is the state in Australia most severely affected by bushfires: Due to climate change , the risk and duration of bush fires are increasing there. It is assumed that the number of days affected by extreme fire risk in Victoria will continue to increase in the future. The reduction in greenhouse gas emissions is seen as crucial for further development. The overheating of the earth's climate system thus represents the frame of reference for the statistical accumulation of extreme heat waves in recent times, such as those in the summer of 2018/2019 , and bush fires, as the most devastating since weather records began in February 2009 with 173 fatalities.

After Tasmania, Victoria also has the most rainfall. The amount of precipitation in the south is significantly higher than in the north, with a higher average precipitation in higher regions.

Landscape in the state of Victoria

Victoria is the second largest economy in the Australian states after New South Wales . The tertiary sector is the most important economic sector. Around a quarter of employees are employed in service companies or in the public sector. Due to the decline of the coal and steel industry and the resulting structural change , Victoria has the highest unemployment rate in Australia (2009). Today around 15% of the workforce is still employed in the manufacturing industry and less than one percent in mining. Important industries are the automotive industry ( Ford , Toyota and Holden ), aluminum manufacturing, oil refining and the defense industry. The center of the manufacturing industry is the capital Melbourne, followed by Geelong . Victoria also has the world's largest known lignite deposits in the Gippsland region . The extraction of around 66 million tons per year is used for energy generation. Offshore oil and gas are produced off the coast . In Victoria, the historic center of the Australian gold rush , today's production is less important, accounting for around one percent of national gold production. The extraction work for mineral raw materials is prepared by the GeoScience Victoria agency and supervised by the state.

Around 60% of Victoria's land area is used as agricultural land. Mainly wheat and barley are grown, as well as tobacco and fruit. Livestock (pigs and lambs) are mainly important in the north and west of the state.

States and territories over time

Aborigines had lived in what is now Victoria for around 40,000 years when European colonization began in the 1830s, particularly from Tasmania . Melbourne was founded in 1835 . From 1851 Victoria was a separate British colony . Gold discoveries in 1851 at Ballarat and Bendigo triggered a gold rush and the associated mass immigration (Europeans and especially Chinese). In 1901 Victoria became a member of the Australian Confederation. Like Queensland , Victoria was named after Queen Victoria , the British monarch at the time.

The Parliament House , built in 1856, home of the Victorian Parliament

The Prime Minister of Victoria is the head of the political party or coalition that won the most seats in the House of Representatives. Together with his cabinet, he provides the legislative power and determines the political agenda for the respective legislative period (and sometimes beyond). Since the November 2014 election in Victoria, Daniel Andrews has led an Australian Labor Party government with 47 out of 88 seats in the House of Representatives. 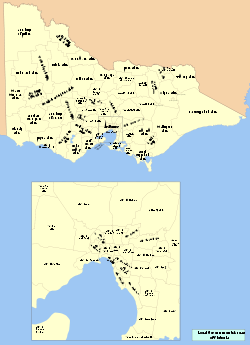 Overview of the Local Government Areas in Victoria

Twelve Apostles in the evening light

Popular tourist destinations in Victoria are:

Victoria has the highest population density in Australia with population centers spread across the state. Only the northwest and the region of the Victorian Alps are significantly less populated. The population centers are connected by well-developed highways (motorways). Around Melbourne is the best developed network of freeways (toll-free highways) in Australia. VicRoads , Victoria's road and traffic authority, is responsible for traffic planning, road construction, vehicle registration and driver license issuing. Numerous private companies operate toll roads in Victoria.

The rail transport in Victoria grew out of the state railway system of the British colony. Nowadays, various private and public transport modes operate on state rail lines. Metro Trains Melbourne operates a well-developed, electrified passenger transport system in Melbourne and its extensive suburbs. V / Line, a state operator, connects the regional centers of Victoria in a dense network. The Overland connects the cities of Melbourne and Adelaide on a long-distance route . CountryLink operates the Melbourne - Sydney long-distance route . Pacific National , CFCLA ​​and El Zorro operate freight lines. In Melbourne, Yarra Trams operates the world's largest tram network with over 249 kilometers of route.

The port of Melbourne is the largest cargo port in Australia and is located in the southwest of downtown at the mouth of the Yarra River . Other seaports are in Westernport, Geelong and Portland . From the port of Melbourne, the two ferries MS Spirit of Tasmania I and II operate the route to Devonport , Tasmania . Crossing Bass Strait takes between ten and twelve hours.

The Melbourne Airport (MEL) located 22 kilometers north-west of Melbourne in the suburb of Tullamarine , hence the more common name Tullamarine Airport. It has two runways and four terminals and is open around the clock. Tullamarine International Airport is the gateway to the state of Victoria by air and is one of the two hubs of the largest Australian airline Qantas Airways . It is the home airport for the Australian low-cost airlines Tiger Airways Australia and Jetstar Airways as well as the two cargo airlines Australian Air Express and Toll Priority . The Avalon Airport (AVV) is the second largest commercial airport in Victoria. The airport is best known for hosting the Australian International Airshow every two years. Other commercial airports in the Melbourne metropolitan area are Essendon Airport and Moorabbin Airport . The following other airports have regular departure times: Hamilton Airport , Mildura Airport , Mount Hotham Airport and Portland Airport . Another 27 small airports with irregular flight times exist in Victoria.

Due to the regional physical-geographical conditions, Victoria has one of the best wind power potentials in Australia, especially along the south coast and in the higher regions. Therefore, most of the wind farms are located on the south coast and around the cities of Ballarat , Ararat and Hamilton . The total capacity of the wind farms in Victoria in 2011 was 428 MW. Numerous wind farms are currently under construction or planning. In the future, these should generate a total output of 3600 MW.

The water supply in Victoria is essentially based on a system of dams and retention basins in the center of the state. The seawater desalination plant in Wonthaggi in the south of Victoria, which was completed at the end of 2011, is an integral part of the water supply in Victoria and, in particular, Melbourne , with an output of 150 to 200 gigaliters per year. The construction of the plant is to be understood as a response to the repeated water scarcity in the 2000s. However, the construction of the plant is still controversial among the public.

The state of Victoria is known for its strong sports culture. The capital Melbourne has repeatedly been called the sports capital of the world.

Victoria is the home of Australian Rules Football , also known as Aussie Rules or Footy. Ten of the eighteen clubs in the Australian Football League are based in Victoria. The annual AFL Grand Final takes place at the Melbourne Cricket Ground and is the world's best-attended club championship event.

The 1956 Summer Olympics and the 2006 Commonwealth Games took place in Melbourne . Every January the Australian Open , the first of the four Grand Slam tournaments , takes place in Melbourne . The Australian Grand Prix has been held as a motorsport event since 1928. It has been held as a Grand Prix as part of the Formula 1 World Championship since 1985 and has been at home on the Albert Park Circuit in Melbourne since 1996 . It mostly marks the start of the Formula 1 season. The Aussie Millions Poker Championship takes place at the Crown Casino in Melbourne . With a total prize pool of over $ 7 million, it was the 2006 poker tournament with the highest total prize pool in the southern hemisphere.

The Surf Coast Shire on the south coast of Victoria is considered a surfing stronghold on the Australian south coast. The coastal towns of Jan Luc, Anglesea, Aireys Inlet , Lorne and Torquay are a focal point for beach and surf tourists. Torquay is particularly famous for its surfing beaches, especially Bells Beach. The Rip Curl Pro takes place annually in Bells Beach as part of the ASP World Tour . World-famous manufacturers of the surfing industry such as Rip Curl and Quiksilver come from Torquay . In Lorne in Surf Coast Shire on the south coast of Victoria, the Lorne Pier to Pub Swim takes place on the first weekend in January , the largest organized sea swim in the world with a swim distance of 1.2 km and around 4,300 participants. ' 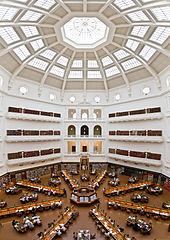 The Australian International Airshow , also Avalon Airshow, is a biennial air show at Avalon Airport , located between Melbourne and Geelong. It has been taking place since 1988 and, according to the organizers, is the largest air show of its kind in the southern hemisphere. The event is a mixture of aerobatic presentations and the introduction of (mostly) military aircraft.

The State of Victoria has partnerships with:

States, territories and outskirts of Australia