The little penguin ( Eudyptula minor ) is the smallest species from the penguin family (Spheniscidae). The birds usually grow to be 35 to 40 centimeters tall and weigh about a kilogram. The average life expectancy is 7 years. The current population is estimated at around 1.2 million individuals.

The main distribution area of ​​the Little Penguin is New Zealand . There they are called little blue penguins or just blue penguins . Animals of the lighter subspecies E. m. albosignata are called white-flippered penguins there. In the Māori language they are called Kororā . There are numerous colonies around New Zealand's North and South Island , on Stewart Island and the Chatham Islands . The little penguin is also the only species of penguin that breeds on mainland Australia. Breeding colonies can be found along Australia's south coast and on Tasmania . In Australia they are only called little penguins or fairy penguins . They are not very shy and sometimes breed under apartment buildings.

Little penguins feed on fish (mainly herring-like species , e.g. Sprattus antipodum in New Zealand ), squids and smaller crustaceans. To do this, they undertake extensive hunting and diving expeditions, which, however, do not take place too far from their breeding colonies. They reach depths of up to 70 meters and an average swimming speed of 7 km / h. They hunt during the day, but they feed their young at night.

They live in large colonies all year round. They nest in crevices, under tree roots or in holes in the ground. In New Zealand, nest boxes are also installed in numerous places, which are used by the penguins as breeding grounds. The breeding season is variable and can extend from May to March. The chicks hatch from two laid eggs after 33 to 39 days of incubation. The chicks fledge after about six weeks. Depending on the start of the breeding season, a pair may raise a second clutch after the first chicks have left the nest. During breeding, the adult penguins return to their colonies at dusk to feed the young. 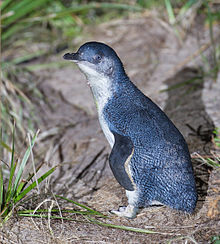 The little penguin was described by the German naturalist Johann Reinhold Forster in 1781 and assigned to the newly introduced genus Eudyptula in 1856 by the Italian zoologist Charles Lucien Bonaparte , which since then has mostly been regarded as monotypical , i.e. H. the little penguin is the only species in the genus. However, a DNA comparison of various genetic markers shows that the little penguin is actually a super species with two cryptic species , one New Zealand species and another that occurs on the south coast of Australia. Hybridizations between the two species only take place in exceptional cases.

The average sequence difference between the Australian and New Zealand Little Penguins is 3.8%, while it is only 0.8% when comparing African penguin ( Spheniscus demersus ) and Magellanic penguin ( S. magellanicus ) and only 1.5% for Comparison of rockhopper penguin ( Eudyptes chrysocome ) and northern rockhopper penguin ( E. moseleyi ) lies. For the New Zealand Little Penguins the scientific name Eudyptula minor will continue to be available, as the type locality of the species is the Dusky Sound in Fiordland in the southwest of the South Island . For the Australian species, the scientific name Eudyptula novaehollandiae is suggested. The type locality is Port Jackson near Sydney .

The two species also make different calls and behave differently. The Australian species prefers to come ashore in groups after dusk, a behavior that has only been observed in New Zealand on the coast of Otago . The population on the coast of Otago genetically belongs to the Australian species. It probably settled on this stretch of New Zealand coast a few thousand years ago. Perhaps the behavior of the Australian species evolved to avoid encountering predatory baggers . Before humans arrived, New Zealand's little penguins were breeding on an island without land-based predators. In contrast to the New Zealand species, the Australian Little Penguins often breed a second time after a successful first brood, depending on the food availability and the temperature of the surface water.

On Phillip Island, southeast of Melbourne, you can watch this nocturnal “penguin parade” in a tourist open-air theater atmosphere. The animals are apparently not bothered by the lighting and the tourists. Similar hikes can also be observed in other places on the Australian south coast, but without tourist preparation on the one hand and entrance fees on the other. The best known alternative is at the Twelve Apostles on the Great Ocean Road. The penguins come every day at sunset and walk in groups on the beach. As a rule, around 400 penguins come, but sometimes more than 1000. Another possibility for observation is at St. Kilda Pier in Melbourne.

New Zealand counterparts can be found in Oamaru (the Oamaru Blue Penguin Colony ) as well as on the Cape of the Otago Peninsula in Dunedin . The lighter subspecies can be seen in Pohatu penguins in Akaroa during breeding and moulting.

The most important natural enemies of the little penguin include the Australian sea lion , the New Zealand sea lion and the New Zealand fur seal and the sharks that live in the waters there .

Although the species is generally not endangered, colonies in areas of more intense human activity are at risk of pollution and feral pets .

Since the beginning of 2018, several thousand little penguins are mainly on the east coast of New Zealand , u. a. in the Bay of Plenty , mostly washed up dead. Researchers see the effects of La Niña as a possible cause of death . According to penguin expert Graeme Taylor, there was last such mass extinction in New Zealand in 1998 .

A visit to Little Penguins in Canberra Zoo , during which one of the penguins “bit” him, inspired Linus Torvalds in 1996 to choose a penguin “ Tux ” as the mascot for Linux.