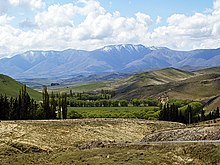 Bridge over the Manuherikia River (built in 1880 to transport gold)

The Otago Region is an administrative region on the South Island of New Zealand . In terms of area, it is the second largest region in the country. The regional council , known as the Otago Regional Council , is based in Dunedin .

Ōtākou is a small Māori settlement of the Ngāi Tahu at the end of the Otago Peninsula on the coast of Dunedin . From this name the Pākehā (the whites) formed the name Otago and so named the hinterland of the coast. The province formed in 1953 was later given this name, and after the provinces were dissolved and the regions formed, the present region was alsocalled Otago .

The Otago Region covers almost the entire central part of the southern half of the South Island of New Zealand with 31,209 km² of pure land. With 202,467 inhabitants in 2013, Otago is the region with the second highest population in the South Island after Canterbury . With 6.5 inhabitants per km², the region has the third highest population density in the southern part of New Zealand.

While the western half of the region is characterized by the eastern flanks and foothills of the New Zealand Alps , the greater part of the eastern half is determined by a highland between 500  m and 1000  m high, in which mountain ranges, hilly landscapes and plains alternate. The south of the region, on the other hand, is hilly with individual forest sections and merges into the low mountain range of the Catlins .

Four large lakes are located in western Otago , Lake Wakatipu , Lake Wanaka , Lake Hāwea and Lake Ohau . The Kakanui Mountains in the northeast and the Dunstan Mountains further west and the Garvie Mountains to the southwest are important mountain ranges . In the alpine regions fall The Remarkables , the Richardson Mountains and the Livingstone Mountains , all of which surround Lake Wakatipu . The largest and most important rivers in the region are the 200 km long Taieri River and the over 300 km long Clutha River .

The climate in Otago is one of the most varied climatic regions in New Zealand. With the preferred westerly winds, the clouds rain down in the mountainous regions of the New Zealand Alps, bringing rainfall beyond 2000 mm per year to the far west of the region. On the leeward side of the mountains, rainfall is falling rapidly and in the highlands of Otago is between 400 and 800 mm per year, depending on the location. In the south towards the Catlins , the precipitation increases again up to 1400 mm.

The average daytime temperatures in summer are between 15 ° C and 22 ° C depending on the location, lower in the higher mountain regions of the west. In winter, on the other hand, the highlands of Otago are characterized by average daytime temperatures in the single-digit minus range, towards the east coast milder with temperatures between 2 ° C and 5 ° C. The average length of sunshine per year in the highlands is between 1900 and 2100 hours depending on the location, around 1600 hours on the coast in the south and around 1800 to 1900 hours on the northern coastal strip.

Before the first missionaries came in the 1820s, whale and seal hunters came over from Australia to try their luck on the coast here. Wellers Rock was a first settlement that was established in 1831 by the Wellers brothers from Sydney as a whaling base on the banks of Otago Harbor near the Māori settlement.

After 162 hectares of land, the so-called Otago Block , was bought off the Ngai Tahu by the British civil engineer and surveyor Frederick Tuckett on behalf of the New Zealand Company in July 1844, the first 347 Scottish settlers of the Free Church of began in late autumn 1848 Scotland the systematic settlement of the region and the founding of the city of Dunedin . In the early years of settlement, the Free Church of Scotland , which was now dependent on its own financial resources due to the bankruptcy of the New Zealand Company , first concentrated on the area of ​​what is now Dunedin . The province at that time still extended over the entire southern part of the island.

On December 26, 1848, at the request of the Scottish settlers, the then governor of the New Zealand colony , Sir George Edward Gray , gave the province the name Otago and in 1852 Dunedin officially became the provincial capital.

From 1861 the region with its capital Dunedin experienced a rapid economic boom. The gold discoveries made by the Australian gold prospector Thomas Gabriel Read near Lawrence changed the region from one day to the next. Numerous prospectors from California , Australia , Europe , North America and China were drawn to Otago .

It was the start of the Otago gold rush . Dunedin became the largest and richest city in the country, but only until shortly before the turn of the century .

Due to rivalries, on March 25, 1861, the southwestern part (today's Southland ) split off from what was then the province of Otago and set up its own administration. Ten years later, Southland Otago was again subordinated administratively. In 1876 the administration system at that time was reorganized and Otago was divided into several districts. Southland has been an independent region since then.

When asked about ethnic group membership in the 2013 census, 89.1% said they were European, 7.5% said they had Māori roots, 2.0% came from the islands of the Pacific and 5.2% % came from Asia (multiple answers were possible). 18.2% of the population said they were born overseas. 1.7% of the population spoke French as the second most common language after English. The Maori language was spoken by 13.4% of the Māori .

Furthermore, the region is divided into four districts and one city, each with its own council :

While the regional administration is responsible for the inland and coastal waters, for the ports, for land, air, erosion, disaster control, transport planning and regional development, the administrations of the districts are responsible for all other concerns of the citizens and the matters which are in a Local authority must be regulated.

The most important economic sectors are distributed quite differently in Otago . Where education, administration and tourism are the main sources of income in Dunedin , Otagos , sheep farming , forestry , agriculture and viticulture are the dominant economic sectors in the various regions . The exceptions to this are Queenstown , with the largest leisure and tourism offerings in summer and winter, and the small settlement Macraes Flat , which houses the Macraes Gold Mine, the largest and most successful gold mining area in New Zealand. The OceanaGold Corporation , which specializes in the mining of gold and copper and, in addition to the Macraes Gold Mine, also operates the gold mine in Reefton and the Didipio gold and copper mine in Kasibu in the Philippines , is one of the most important employers in the region become.

Coal mining played a major role in Otago from 1840 until the closure of the largest mine in Kaitangata in 1970 . In 2011 only 50,000 tons of coal were mined in the region for local needs.

The region is connected by the New Zealand State Highway 1 , which , coming from Invercargill , runs along the east coast through Dunedin further north to Christchurch . He branches southeast of Milton of State Highway 8 by Alexandra off to continue from there to the north lies the northern parts of the country the South Island with the region Otago connect to. Further west comes State Highway 6 from Invercargill and connects Queenstown and Wanaka . The State Highways 85 , 87 and 90 are cross-connections.

The South Island Main Trunk Railway connects Invercargill with Dunedin , Christchurch and the north of the South Island and runs along the east coast of the region. Only goods are transported over the connection.

About the Dunedin Airport , the region is connected to all regional airports in the country. Another important airport is Queenstown Airport , as it is mostly used to bring tourists to the touristically developed region around Queenstown .

By far the most important place in Otago for leisure and sport is Queenstown and the surrounding area. Bungee jumping , rafting and paragliding in all variations are just a few of the many pleasure sports that annually attract around 1.7 million guests (2000) from all over the world. The downside of this tourism, however, shows itself in crime and drug consumption , with Queenstown in New Zealand now in second place in drug production behind Auckland .