The then governor of New Zealand, Thomas Gore Browne , gave his consent in 1856 for the establishment of a new city on the south coast of the South Island. He recommended calling the city Invercargill , whose name he derived from a combination of the word " Inver " (from the Scottish Gaelic " Inbhir " for "estuary") for the confluence of the two rivers Oreti River and Makarewa River and " Cargill " Honor of Captain William Cargill , then superintendent of the province of Otago .

Invercargill is located at 46 ° 25 ′  S , 168 ° 21 ′  E at the southern end of the South Island at the confluence of the Waihopai River and the Oreti River in a plain bounded to the west by the Longwood Range and the Takitimu Mountains , to the north by the Hokonui Hills and bounded to the east by the Catlins . The city and has a pure land area of 389 square kilometers belonged to the Census in 2013, 51,696 inhabitants. This makes Invercargill the seventh largest city in the country in terms of area, but with 132.9 inhabitants per km² it is also the city with the fourth lowest population density. -46.415277777778 168.3475

The city is surrounded to the west, north and east by the Southland District . The southern border forms the coastline to the Foveaux Strait .

The highest elevation in the urban area is the small mountain The Bluff on the Bluff peninsula at 265  m .

The districts of Invercargill are listed from west to east:

In 1844 the area around Invercargill was described by surveyor Frederick Tuckett as an uninhabitable swamp region, but the area was bought from the local Māori in 1853. In 1855 the first settler, James Kelly, the whaler, settled in what is now the city, whereupon the first settlement was established. After him, the village was initially known as Kelly's Point .

From 1856 under the leadership of the Chief Surveyor of the Province of Otago , John Turnbull Thomson , began to build a planned town, which was soon called Invercargill. A post office opened in 1857 and the first districts were sold on March 20 of the same year. In 1859 the place had about 1000 inhabitants in 200 apartments. In 1861 a hospital opened to serve Invercargill and the surrounding area. In the same year the province of Southland was spun off from the province of Otago, Invercargill became the capital of Southland. From 1862 the place had its own newspaper, the Invercargill Times .

As a result of the Otago gold rush , the city grew and new railroad lines to Winton and Bluff began, but were not completed. After the downturn in the gold rush, the new province of Southland quickly fell into debt and was reintegrated into Otago in 1870. In 1871 the first elections were held in Invercargill. As a result of government sponsored immigration, the city grew and the economy developed towards the end of the 19th century. The water tower, which is one of the most important landmarks of the city today, was built during this time. The population doubled between 1891 and 1916. The strong growth ensured the incorporation of several suburbs and the establishment of a tram system that, until its closure in 1952, formed the southernmost tram network in the world. 1930 Invercargill received city status.

After World War II , the city flourished, with the population rising from 27,000 to over 40,000 in 1971. After the city had a peak of 53,868 inhabitants in 1983, the downturn began and the population fell to 46,311 in 2011. The reasons for this were poor agricultural yields and a lack of industry. In 1989 the suburb of Bluff was incorporated into the city. In 2002 the train connection to Dunedin and Christchurch was discontinued. However, the population has been increasing again since 2006.

Invercargill is not divided into wards like other New Zealand cities and districts . Twelve Councilors (council members) together with the Mayor (mayor) form the City Council (city council). The mayor and council members are re-elected every three years. The city council is called the Invercargill City Council . Invercargill is also the seat of the Southland Regional Council , the regional council of the Southland region. The mayor of Invercargill has been Tim Shadbolt since 1998, who held this position from 1993 to 1995.

Invercargill is twinned with cities: 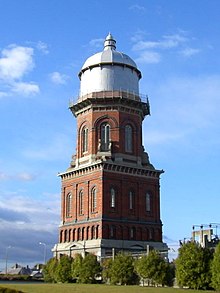 The water tower, one of the most famous landmarks in the city

The 42.6 meter high water tower of Invercargill is one of the most famous sights of the city. In the 1880s, the construction of the water tower was decided by the local authorities in order to be able to react to fires that could destroy the city, which consists of many wooden buildings. Since many of the residents refused to build a huge water tank on the outskirts of the city, the 300,000 liter tank was enclosed by an elaborate brick tower at the suggestion of the architect William Sharp. On December 18, 1888, construction was completed after a year of construction and the use of 300,000 bricks. In 1934 the dome of the water tower was dismantled, in 1989 a replica of the old dome was placed on top of the tower.

The historic Railway Hotel is one of the oldest buildings in Invercargill, still serving its original purpose today. It is from the New Zealand Historic Places Trust as a historic place in Category 1 classified. It was built in 1896 right next to the train station in Invercargill and was primarily intended to accommodate guests arriving by train. In 1907 the hotel was expanded significantly due to the high demand. In 2002 the name was changed to Victoria Railway Hotel and in 2003 it was closed for eight months due to extensive restoration work. The hotel has been hosting guests again since 2004. 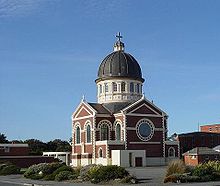 The Catholic Church of St. Mary's Roman Catholic Basilica was designed by the well-known New Zealand architect Francis Petre and completed in 1905. The church has been listed as a Category 1 historic place by the New Zealand Historic Places Trust since 1984 . The 37 meter high structure has a Greek cross as its basic shape, on which the copper-clad cathedral sits enthroned.

The median income for the population of Invercargill in 2013 was NZ $ 27,400  , compared to NZ $ 28,500 national average. Invercargill is home to the Invercargill Brewery , which was founded in 1999 and is one of New Zealand's most famous breweries. The automobile manufacturer Leitch Industries is also based in Invercargill.

The South Island Main Trunk Railway connects Invercargill with Dunedin and the northern parts of the South Island. Only goods are transported over the connection, as is the natural harbor of Bluff , which is part of the urban area of Invercargill and which connects the city with the other ports in the country. Until 2002, Invercargill owned the Southerner to Christchurch rail passenger service, making it the southernmost passenger station in the world since the end of passenger traffic to Bluff. From Bluff from the island's Stewart Iceland in the south by ferry to reach. The airport west of Invercargill connects the city with all regional airports in the country. 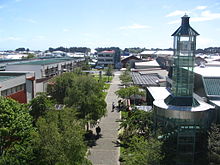 Main Campus of the Southern Institute of Technology in Invercargill

Invercargill is the headquarters of the Southern Institute of Technology , one of New Zealand's largest technical universities . Local students do not have to pay tuition fees there. There are also four high schools in town .

Invercargill is one of the centers of New Zealand sport and has several stadiums. Next to the Rugby Park Stadium , where the national team from Southland Rugby and occasionally the Highlanders from Dunedin as well as the soccer team Southland Spirit FC play their home games, the ILT Velodrome is one of two indoor cycle tracks in New Zealand.

There is also a swimming center, hockey and cricket venues and the Southland Stadium , which is home to the Southern Steel netball team and the Southland Sharks basketball club . After the roof of the stadium collapsed on September 18, 2010 as a result of a snow storm , the games of the two teams were initially relocated to the building complex of the nearby cycling track.

Southwest of Invercargill is the Teretonga Park automobile race track, where an annual race of the international Tasman Series was held in the 1960s and 1970s . Toyota Racing Series races have been held on the track since 2005 .

Districts of New Zealand on the North Island

Districts of New Zealand in the South Island