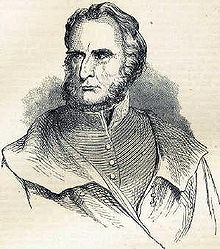 Charles James Napier , who gave the city its name 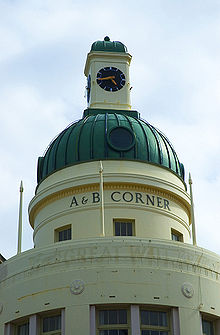 Napier , official name: Napier City , on Māori Ahuiri , is a port city and an independent Territorial Authority on the North Island of New Zealand . It houses the Hawke's Bay Regional Council and the administration for the Hawke's Bay region . The city council of Napier , which is also called the City of Napier , is called Napier City Council . Together with the city of Hastings ,which is around ten kilometers to the south, thetwo cities form the fifth largest metropolitan area in New Zealand, which is often referred to in English as " the Twin Cities ".

In February 1854, Alfred Domett , who was the magistrate of Hawke's Bay Province at the time , proposed that the newly founded city be named after the British General Charles James Napier and, accordingly, other places in the region also after prominent personalities involved in the British East Indies. Company deserved.

Napier City is located at the southern end of Hawke Bay on the east coast of the North Island, 145 km northeast of Palmerston North . To the south of the city the Ngaruroro River flows into the Pacific Ocean and 5 km further west the beginning mountainous landscape closes the plain of the narrow coast. The city and has a pure land area of 105 square kilometers belonged to the Census in 2013, 57,240 inhabitants. This makes Napier with 542.9 inhabitants per km² the city with the fourth highest population density in the country. Napier is enclosed to the north, west and south by the Hastings District , while the eastern boundary of the city is formed by the coastline of Hawke Bay .

The mean daytime temperatures are 24 ° C and above in summer and around 6 ° C in winter, with sunshine lasting around 2100 hours per year. The area of Napier City is correspondingly low in rain and only receives 800 mm of precipitation per year.

Before Europeans came to New Zealand and also took possession of the Māori land in the Napier region , different Māori tribes lived in the area that is now part of the greater Napier area. Most recently, it was the Ngāti Kahungunu who settled the country, and it was they with whom the first Europeans, such as James Cook , had contact in 1769 and 1770.

Traders, whalers and missionaries were the first Europeans to settle in the lagoon and bay of what would later become Napier after the new country became known . Farmers and hoteliers followed in the 1850s. In 1851 the government bought the so-called Ahuriri block, named after the Māori - Chief Tu Ahuriri and two years later, the government commissioner for land matters bought Donald McLean , the land on which later Napier should arise. At that time, Hawke's Bay was still part of Wellington Province .

In 1854, the government commissioner and later Prime Minister Alfred Domett was appointed magistrate for the Ahuriri land block . His task was to shape a city out of the settlement and to work out building and development plans. He named the settlement after the British general Sir Charles Napier , who had worked for the British crown in colonial India . In 1858, after Hawke's Bay became an independent province, Napier was to become the capital of the new province. In 1874 Napier was raised to a borough , so it got the status of a self-governing city. On January 18, 1875, the first election to the city council was held. Napier was the administrative center of the Hawke's Bay region until 1876 , but with the Abolition of Provinces Act , the administration of the region was returned to Wellington .

The development of the city was largely limited to the areas around the harbor and the development of Scinde Island , which today forms Bluff Hill . However, the settlement area around Napier was spread over a few islands, between which there were extensive swamps. This changed suddenly when Napier and the rest of Hawke's Bay were shaken on February 3, 1931 by an earthquake with a magnitude of 7.8 M S on the Richter scale . Napier was completely destroyed by the quake and the subsequent great fire, and the neighboring city of Hastings was badly hit.

By the earthquake , the soil was raised by some by up to 2.7 meters, so from the Ahuriri -Lagune and from the large tidal flats 40 km² territory emerged. On this land was Napier's new lifestyle -Zentrum Ahuriri . Due to the earthquake, the city also lost its functioning administration and political leadership, so that until 1933 a two-person commission set up by the government determined the fate of the city. After the local elections in 1933, the city got its Borough status back and in 1950 finally received full city rights.

Despite the lingering effects of the Great Depression in the early 1930s, the city of Napier was rebuilt in an Art Deco style. " Let a new era begin ," the message to the people of the city should be. Architecture students and unemployed people from all over the country were sent to Napier and entrusted with the reconstruction. The pastel colors were created out of necessity, whereby the colors were stretched with water. In addition, Art Deco was one of the cheapest ways to rebuild the city, as concrete slabs could be used as an inexpensive building material and the decoration on the houses in this style was relatively easy.

Napier City has twelve Councilors , six of which are elected for the entire city area and the other six are spread over four so-called wards , which represent local electoral districts. They send two councilors each from Nelson Ward and Taradale Ward to the council and one councilor each from Oenkawa / Tamatea Ward and Ahuriri Ward . Together with the Mayor (mayor) they form the City Council (city council). The mayor and the twelve council members are re-elected every three years.

Napier is attracting more and more tourists due to its unique architecture and pleasant climate. The “ Marine Parade ”, a delightful promenade, runs right by the sea . There are several attractions for visitors, such as the well-tended gardens of " Sunken Gardens ", a small golf course and a roller skating rink .

A popular photo motif is the statue of Pania (English Pania of the Reef ), which is assigned a major role in Polynesian mythology . The statue has roughly the same meaning for the city of Napier as the Little Mermaid for Copenhagen .

Because of the favorable climate and the plain of the Heretaunga Plains , Napier and the neighboring Hastings are a center for the cultivation of fruits such as apples , peaches , the kiwi fruit or grapes , as well as the production of wines .

The in Napier based companies are spread over many and various industries. In addition to companies from the electronics sector, there are also large synthetic fertilizer producers and wineries here. Napier has the largest sheep wool processing company in the southern hemisphere. There is also a significant tobacco industry in Napier . With the reference to "falling tobacco consumption", however , British American Tobacco announced that it would relocate the local Rothmans factory to Australia.

The city is on the Palmerston North – Gisborne railway line , on which since 2001 only freight traffic has been scheduled . A branch line connects the port.

Hawke's Bay Airport , which was built on a silted-up lagoon and opened in 1963, is located less than 5 km northwest of the city .

The Art Déco Weekend , organized by the Art Déco Trust, attracts visitors and tourists from all over the world in February. Napier brings the life and culture of the 1930s back to life in various events .

Architecture enthusiasts consider Napier to be the best preserved Art Deco city; only South Beach ( Miami ) has a similar number of Art Deco-style buildings. Although some of the unique buildings were replaced with new buildings in the 1960s to 1980s, most of the city center, which has been a listed building since the 1990s, has been almost completely preserved. Many Art Deco houses have been restored in recent years . Particularly worth seeing are the Masonic Hotel , the Criterion Hotel , the Daily Telegraph Building , the Country Wide Bank , the A&B Building , whose dome has become Napier's landmark , and the theater with its Egyptian-style columns and arches.

Districts of New Zealand on the North Island

Districts of New Zealand in the South Island