This article is about the British pop singer Tom Jones . For people with the same name or with different meanings, see Tom Jones (disambiguation) . 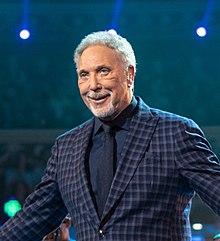 Jones on the Walk of Fame Europe in Rotterdam

Tom Jones was originally a vacuum cleaner salesman, but tried a career as a singer with the beat band Tommy Scott and the Senators as early as 1963 . That year he recorded seven pieces in Joe Meek's studio, but they were not released until 1965 after his first great success. The band wasn't very successful, so Jones decided to embark on a solo career.

As a club singer, Jones started out in the evenings under the pseudonym “Tiger Tom” (the nickname “Tiger” has remained to this day) through the Welsh working-class pubs and from 1964 through the London bars. There he was noticed by the manager Gordon Mills , who produced records with him. The first single Chills and Fever flopped, but the follow-up track It's Not Unusual landed at number 1 in the British charts . Many hits followed. In 1965 he sang the theme songs for the films What's New, Pussy? ( What's New, Pussycat? ) And Fireball ( Thunderball ). He also achieved great success in Germany . He came in 1968 with Delilah and Help Yourself twice on number 1 of the German hit lists. He successfully played with his sex appeal , performing in skin-tight trousers and shirts wide open, showing off his lush chest hair. His live concerts were sold out and crowded with screaming girls and women.

In the early 1970s, Jones moved to Las Vegas , where he appeared on club shows. At that time he had specialized in country pop , which earned him a few hits. Then it became a little quieter around him. In 1987 he reappeared in the British charts with the song A Boy from Nowhere . In 1988 he covered the Prince composition Kiss together with the electronic avant-garde Art of Noise . In 1991 he sang Carrying a Torch in a duet with Van Morrison . In 1993 he was in the NBC - TV series The Fresh Prince of Bel-Air (Season 3, Episode 18) a guest appearance as Carlton's guardian angel.

In 1994 Jones hosted the first MTV Europe Music Awards in Berlin , and in 1996 he made a self-deprecating appearance in the film Mars Attacks! by Tim Burton . In 2000 he landed the hit Sex Bomb, written and produced by Mousse T. , and offered a mix of duets with the album Reload 1999/2000, with Nina Persson from the Cardigans , Robbie Williams , the Stereophonics and the Manic Street Preachers . The cover version of the Talking Heads title Burning Down the House together with Nina Persson was internationally successful and reached number 10 in the British charts.

Jones was promoted to Knight Bachelor in 2006 by Queen Elizabeth II ; as a result of this ennoblement , his address has since been Sir Thomas. In November 2008, Jones released his 25th studio album, 24 Hours . For this album he was the first to work as a songwriter. Kara DioGuardi contributed to Give a Little Love a piece in, and with The Hitter of Bruce Springsteen there is another cover song on the album. Jones has been a jury member and coach on the UK singing talent show The Voice UK , which airs on BBC One , since the first season of 2012 .

Jones was married to Melinda Rose Woodward since 1957, with whom he has a son. She died on April 10, 2016 of complications from cancer .