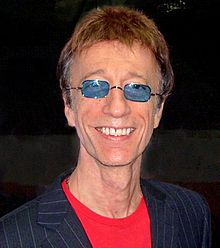 Robin Hugh Gibb ( CBE ; born December 22, 1949 in Douglas , Isle of Man , † May 20, 2012 in London ) was a British-Australian singer , composer and lyricist . He was best known as the lead singer of the pop group Bee Gees , which, with more than 200 million records sold, is one of the most commercially successful bands in music history. Robin Gibb composed most of the hits that made it to the UK charts. In 1994 he was inducted into the Songwriters Hall of Fame . In 2004 he received an honorary doctorate in music from Manchester University .

Robin Gibb was born the third of five children on the Isle of Man. His mother was a singer, the father led a small orchestra. Together with his sister Lesley (* 1945), his brothers Barry (* 1946) and Andy (1958–1988) and his twin brother Maurice Gibb (1949–2003), who was born 35 minutes later, Robin Gibb grew to be his age seven in Manchester . At the age of six, he and his brothers made their first public appearances. In 1958 the family emigrated to Australia and settled in Cribb Island, a suburb of Brisbane . All family members received Australian citizenship. In 1966 they returned to Great Britain.

Robin Gibb became known from the mid-1960s as the lead singer of the Bee Gees , which is listed in the Millennium Edition of the Guinness Book of Records as "the most successful family band in the world". 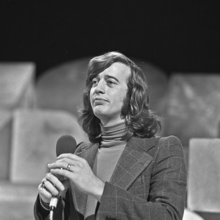 Robin Gibb during a concert in Leipzig (May 2009)

As a result of a dispute, he left the group in 1969 to devote himself to his solo career. With more than a million copies of his debut single Saved by the Bell sold , he achieved a worldwide hit in October of the same year. In 1970 his first solo album Robin's Reign followed , which was able to place in the top 20 of the German charts. A second album, also recorded in 1970, entitled Sing Slowly Sisters , remained unreleased until 2015. It appeared on the 3-CD compilation Saved By The Bell along with the debut album Robin's Reign with three bonus tracks. CD 3 contains rarities, including moderated live performances, Italian versions, Christmas carols and historically important demo versions.

After a 15-month separation, the brothers reunited as Bee Gees and celebrated a number of international successes in the 1970s, including the score for Saturday Night Fever . When it was musically quieter for the trio at the beginning of the 1980s, Robin Gibb released his second solo album, How Old Are You (1983). It reached number six in the German charts. The single Juliet took the top position for six weeks in the same year and is one of the best known solo titles of the artist. With Secret Agent (1984) and Walls Have Eyes (1985) two more records followed, but they could not match the sales figures of their predecessor. With their number one hit You Win Again in 1987, the Bee Gees made a globally successful return to the music business.

More than fifteen years after his last release as a solo artist, Gibbs' fifth album, Magnet , was released in January 2003 , and once again placed in the top 10 of the German charts. Together with the orchestra of the Neue Philharmonie Frankfurt , he completed a concert tour through Germany in 2004. Various recordings were then summarized on a live CD and DVD. The further course of the tour took him to Russia and Asia. In collaboration with other British artists, Robin Gibb took part in the One World Project music project in January 2005 , which collected donations for the victims in January 2005 on the occasion of the 2004 flood disaster in the Indian Ocean . A benefit concert at the Millennium Stadium in Cardiff was followed by the common single Grief Never Grows Old , which climbed to position four in the British charts . In 2006 the sound carrier My Favorite Carols was released with the original composition Mother of Love and ten Christmas carols. In 2007, Gibb re-recorded the title Too Much Heaven, which was first published in 1978, with the band US5 , and the following year he published the song Alan Freeman Days . This is dedicated to the BBC radio presenter DJ Alan Freeman, who supported the Bee Gees in the 1960s and Robin Gibbs' solo single Saved by the Bell in Great Britain in 1969. Freeman was an Australian who came to England in 1958 and was a presenter on Radio Luxemburg until the 1970s .

On the occasion of the 100th anniversary of the sinking of the RMS Titanic , Gibb composed the one-hour requiem The Titanic Requiem together with his son Robin-John . It premiered on April 10, 2012 in Westminster Central Hall by the Royal Philharmonic Orchestra , but Gibb was unable to attend the premiere due to his health condition.

As President of CISAC , which is committed to protecting the copyrights of composers and lyricists, Robin Gibb represented a total of 222 authors' societies from 118 countries from 2007 to 2012.

In 1968 Robin Gibb married the secretary Molly Hullis, with whom he had two children (son Spencer, * 1972 and daughter Melissa, * 1974). The marriage ended in divorce in 1980. Since 1985 he was married to Dwina Murphy Gibb for the second time, from this connection the son Robin-John (* 1983) comes. In addition, Gibb had a daughter (* 2008) with his former domestic worker Claire Yang.

Robin Gibb was vegan and lived with his family on The Prebendal House in Thame in Oxfordshire, UK . He was co-initiator of a memorial planned in London for British air fighters of the Second World War , which is controversially discussed in Great Britain and Germany in the public and the media.

Due to an intestinal obstruction , Robin Gibb had to undergo an operation in August 2010. After his preliminary recovery, he performed in New Zealand and Australia, but canceled his tour of Brazil in April 2011 due to renewed health problems. In October 2011 it was announced that Gibb had colon and liver cancer . As a result, he underwent multiple chemotherapy and surgical procedures.

In February 2012, Gibb announced that he had overcome cancer. Together with the British band The Soldiers , he gave his last appearance in the London Palladium that same month . He was no longer able to take part in the premiere of his Titanic Requiem on April 10, 2012. Robin Gibb died on May 20, 2012, a few weeks after he had made his supposed cure public, as a result of his cancer. He was buried on June 8, 2012 in St Mary's Parish Churchyard in Thame.