Classification according to the cause

Classification according to the intestinal section

Classification according to age

Different types of ileus are different in frequency depending on age:

Classification according to the symptoms

The distinction between ileus and subileus (preliminary stage of ileus) depends on the severity of the build-up and the symptoms. The boundary between the two forms is blurred and not clearly defined, but for pragmatic reasons it separates the group with an indication for an operation from a group with a conservative treatment attempt in mechanical ileus . 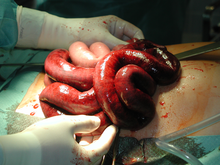 Bridenileus of the small intestine with partial gangrene (operation picture ) 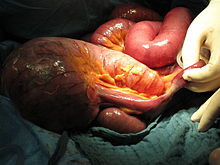 Torsional ileus, the lacing groove on the ileum is clearly visible.

Causes of mechanical ileus can include: a. be:

Causes for the cessation of the peristalsis and the slackening of the intestinal wall (paralytic ileus, syn. Intestinal atony ) are

The symptoms of an intestinal obstruction are cramp-like abdominal pain, a bloated stomach ( meteorism ), vomiting of stomach and intestinal contents up to vomiting ( miserere ), wind and stool retention with increased peristalsis ("mechanical bowel noises" during auscultation). Typically, the pain can be clearly localized at the beginning, but is more and more diffused over the entire abdomen as it progresses. In the late stage, the symptoms of peritonitis appear because germs migrate through the intestinal wall.

The physical examination , including rectal examination results with local pain, guarding , hernias ( hernias ) and hyperinflation important information. In addition, blood is taken to determine laboratory values ​​as well as imaging with sonography and possibly x-ray of the abdomen .

If ileus is suspected, sonography provides quick information: one sees a typical pendulum peristalsis , i. H. the intestinal contents oscillate back and forth. There are also widened loops of intestine that are excessively filled with air or liquid. One can often narrow down the location of the closure. Sections of the intestine behind a mechanical obstacle have collapsed (starvation bowel) .

The blank x-ray of the abdomen while standing or lying on the left side shows in typical ileus overextended intestinal loops with fluid levels as an indication of the location of an obstruction. Depending on the patient's condition, the location and cause can be narrowed down by an enema and / or a passage with contrast medium .

In addition, a CT of the abdomen can be performed. This can often be used to find the cause of the bowel obstruction.

Other diseases such as pseudo-obstruction Ogilvie's syndrome , spastic colon and metabolic disorders such as porphyria , toxic megacolon or Crohn's disease must be distinguished from the long list of causes of ileus .

Sometimes the cause of an ileus cannot be identified and a laparoscopy is required.

Due to the occlusion or the lack of peristalsis, the intestinal lumen distension and stool retention occurs. The lack of movement of the chyme and its build-up lead to increased bacterial growth, which can lead to translocation into the blood vessels and sepsis. At the same time, there is a massive shift in electrolytes and water caused by the local inflammatory reaction in and around the intestine and into the retroperitoneum . This can lead to severe dehydration, similar to pancreatitis . Bacterial toxins and the fluid displacement can lead to circulatory and multiple organ failure . In its effects on the whole body, one speaks of ileus disease .

If the ileus remains unknown, the intestinal wall may perforate. This causes fecal peritonitis .

Therapy depends on the underlying cause. This also applies to the procedure to be used in the event of an operation. In the case of a paralytic ileus, prokinetics can be used to stimulate bowel activity. If strangulation or a strap is present, surgical intervention, preferably using a minimally invasive technique (laparoscopy), is indicated.

Accompanying measures serve to relieve the intestines such as gastric tube , possibly parenteral nutrition or enema . A central venous catheter should be considered for rapid and adequate fluid therapy. A urinary catheter should be used for balancing.