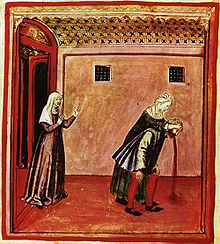 Vomiting, illustration from Tacuinum Sanitatis from the 14th century

Vomiting is the surge-like emptying of the stomach or esophagus ( chyme ) against the natural direction ( retroperistaltic ) through the esophagus and mouth .

Medical terms for vomiting are vomiting ( Greek ἔμεσις ) and vomitus ( Latin ). The German (elegant) term “Vomitation” is also in use from Latin. Occasionally the broader term regurgitation ("regurgitation") is adopted from Latin into German and is also used synonymously . However, this does not necessarily have to result in the regurgitated fluid escaping from the mouth, but can also lead to aspiration of the vomit when inhaled .

When vomiting occurs, after the rhythmic contractions of the stomach and food congestion in the stomach, the stomach and diaphragm as well as the intercostal and abdominal muscles contract, the stomach mouth opens and the lower esophageal sphincter expands, so that stomach contents, in severe cases also intestinal contents, enter the esophagus Mouth and then passed out as vomit (vomitat). It is usually associated with a burning sensation in the esophagus ( heartburn ) caused by stomach acid .

Vomiting is usually triggered by vago- vasal stimuli and controlled by a complicated external reflex mechanism from the vomiting center (including the area postrema ) in the medulla oblongata of the brain stem . In the vomiting reflex , the ninth and tenth cranial nerves (the glossopharyngeal nerves and the vagus nerves ), nerves of the airways , nerves for the abdominal muscles and the diaphragm are activated.

May vomiting by the administration of emetics or indirectly via the Rachenhinterwand- or gastric mucosa, the smell - or taste organs especially in disgust or via the vestibular system (see nausea trigger), as well as psycho-vegetative response to visual, olfactory (sense of smell) or acoustic stimuli .

Direct irritation of the vomiting center, e.g. B. by concussion , tumor diseases , meningitis , sunstroke , stroke , increased intracranial pressure or obstructions to the drainage of the cerebral fluid can lead to vomiting. Boat trips and rocking movements ( seasickness ), winding car rides, rollercoaster rides or diseases of the inner ear can disrupt the organ of equilibrium and also trigger nausea. Migraines can cause nausea and vomiting. As a circumscribed bulbar damage, the syndrome of the Deiters nucleus and its cerebellar , vestibular nerve and other widespread afferents ( Bonnier syndrome ) is considered to be the trigger for nausea.

The causes of vomiting are varied and range from temporary gastrointestinal infections to more serious illnesses such as chronic esophageal or gastrointestinal diseases. Vomiting can also occur as a result of medication (so-called drug-induced vomiting, especially cytostatics ) and poisoning (e.g. from mushrooms or excessive alcohol consumption).

If there is a narrowing in the stomach outlet or intestinal obstruction , so-called overflow vomiting can occur even without vaso-vagal stimulus .

Coughing fits can also trigger vomiting, especially in young children . After chemotherapy or radiation therapy for cancer, nausea and vomiting can occur either immediately or after a few days. However, this is largely prevented by the precautionary administration of antiemetics . Another cause of nausea and vomiting can be metabolic imbalances: uremia , liver failure , changes in blood sugar . Vomiting is one of the most common reasons for advice in a general medical practice.

Vomiting after an operation

Some animal species also vomit in order to pass food on to other conspecifics ( trophallaxis ). Others vomit in order to get rid of indigestible hairballs or bulges that have accumulated over time , for example cats , owls , similar to the phylogenetically much older sharks . A distinction must be made between the choking up of pre-digested matter in ruminants , which has a function in their own digestive process. Some animals cannot vomit; B. Horses and rats .

When you vomit, fluids and stomach acid are lost, which can lead to a lack of fluids and electrolytes in the body. Vomiting can also irritate the esophagus and tear the lower esophagus ( Mallory-Weiss syndrome , Boerhaave syndrome ). With frequent vomiting also can teeth affected are. In the event of vomiting, it is not guaranteed that the active ingredients of the medication will be absorbed through the stomach and intestines. B. intravenous or subcutaneous .

Treatment of vomiting should be based on the cause and should be done in a quiet environment. Antiemetics are available for drug therapy . In incoordination be successfully antihistamines (z. B. diphenhydramine and doxylamine ) or anticholinergics (z. B. scopolamine ) were used. Nausea and vomiting associated with a migraine attack are usually treated with prokinetics (e.g. metoclopramide and domperidone ), which also accelerate the absorption of migraine drugs. If vomiting occurs during the chemotherapy of malignant tumors with cytotoxic drugs are Setrone (5-HT 3 antagonists. E.g., ondansetron and tropisetron and) corticosteroid dexamethasone effect. In the case of mental eating disorders ( anorexia nervosa and bulimia ), psychiatric clarification is important.

The problem with the treatment of vomiting is the inadequate absorption of medication, which is given in the form of tablets or drops. In milder cases, rectal administration of an antiemetic such as domperidone or diphenhydramine as a suppository is sufficient . In more severe cases, parenteral medication and an additional fluid and salt balance may be necessary.

The type of vomit can be diagnostically important, e.g. B. at:

In the case of poisoning , the vomit can provide important clues as to the cause.

In the case of acute poisoning, attempts are made to reduce or prevent the absorption of the poison by induced vomiting . The importance of therapeutic vomiting in acute poisoning has decreased significantly in favor of measures such as gastric lavage and, above all, the administration of activated charcoal, since these measures are associated with fewer complications. This measure must not be carried out in the event of ( contraindications ) impaired consciousness of the patient, poisoning with acids or alkalis (additional damage from second contact with the esophagus and mouth), poisoning with foam-forming substances or organic solvents (due to risk of aspiration ) or respiratory / circulatory disorders.

The vomiting can be triggered with the following substances ( emetics ):

Great importance was attached to the breaking method in ancient medicine. The important physician Bernhard Aschner , who propagated the old medicine in constitution therapy, describes the vomiting procedure as "one of the most powerful, most indispensable and often crucial life-saving remedies".

Christoph Wilhelm Hufeland counted emetics (together with bloodletting and opium ) among the "three heroes of the healing art" without whom he would not want to be a doctor; at Avicenna says: "vomitus fortis infantium curatio" (vomiting is for children a powerful remedy); Hippocrates of Kos described the vomiting process as one of the most important remedies for mental illness. These ideas lasted until the 18th century.

Aschner describes a wide range of indications for the crushing process:

The pathological fear of vomiting is called emetophobia .

Vomiting plays an important role in many magical or ecstatic practices around the world and is regarded, among other things, as a form of catharsis or mimesis . With this in mind, “throwing up” was examined by the Tübingen ethnologist Thomas Hauschild . In addition to the word “puking”, other colloquial terms are known for it: heron , choking , vomiting , spitting , göbeln , in Austria also spitting .