The paired vagus nerve just vagus is also the tenth cranial nerve , N. X called. It is the largest nerve of the parasympathetic and is involved in regulating the activity of almost all internal organs . Its large area of ​​distribution gave its name, the name derives from the Latin vagari ("wander around"), literally translated it means "the wandering nerve".

In addition to its vegetative function, it is involved in the motor control of the larynx , throat and the upper esophagus and transmits taste sensations from the base of the tongue as well as touch sensations from the throat, the larynx and part of the external auditory canal . The internal organs in the chest and abdomen are also reached by sensitive fibers (viscera afferents ), but these primarily serve to convey reflexes . The vagus thus contains the following fiber qualities: somatomotor (voluntary control), somatosensitive (consciously perceptible), sensory (taste), visceromotor and visceromotor (parasympathetic).

The nerve is connected to the IX. and XI. Cranial nerves ( glossopharyngeal nerve or accessory nerve ) also combined to form the " vagus group ".

Origin of the vagus

The nerve occurs in the area of ​​the medulla oblongata in the sulcus retroolivaris on the side of the olive (together with the accessory nerve and glossopharyngeal nerve , lower group of three) on the surface of the brain and, like the other nerves of the vagus group, pulls out of the cranial capsule through the jugular foramen . Here it passes through two closely spaced ganglia :

The somata of the afferent fibers (a distinction between sensory and sensory is no longer made) of the vagus nerve are located in these two ganglia.

Course outside the skull

The vagus nerve runs along the neck together with the common carotid artery and the internal jugular vein in a shared connective tissue sheath , the carotid vagina , in the direction of the chest cavity. With a good ultrasound device, the nerve in the area of ​​the carotid arteries can also be localized sonographically. In most other mammals it is about the entire neck with the sympathetic nervous system to the trunk vagosympathicus connected.

Branches of the vagus nerve

The ramus auricularis (ear branch) runs through the canaliculus mastoideus and through the fissura tympanomastoidea. It sensitively supplies the skin on the inside of the auricle and the external auditory canal as well as part of the eardrum .

The branch is responsible for the fact that vegetative symptoms such as coughing or vomiting can occur when the external auditory canal is irritated (foreign bodies, rinsing with cold water) .

The ramus oesophageus (esophageal branch) innervates the striated muscles of the esophagus by motor means .

The depressor nerve does not occur in humans. In animals, it arises at the front neck of the vagus and reunites with it shortly afterwards. At the entrance to the breast it separates from the vagus again and moves towards the aorta . It transmits information from receptors in the aortic wall that register blood pressure ( baroreceptors ) to the brain stem. In humans, these fibers run in the cardiac branches of the vagus nerve itself.

The nerve fibers, like those of the carotid sinus , regulate blood pressure.

The Rami cardiaci (heart branches) ensure the parasympathetic influence on the heart's activity . They form with sympathetic fibers of the first ganglia the cardiac plexus at the base of the heart. They mediate a decrease in the heart rate ( chronotropy , right vagus). The vagus has no influence on the contraction force of the heart ( inotropy ), since it only inhibits the transfer of excitation from the atrium to the ventricle (left vagus), but does not innervate the heart muscles. Only the sympathetic nervous system increases the muscle strength of the heart and thus has a positive inotropic effect (gr. Ís, inós = strength, muscle). 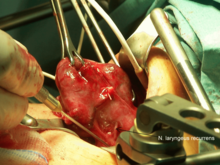 The left recurrent laryngeal nerve , exposed during a goiter resection

The recurrent laryngeal nerve (declining larynx nerve, vocal nerve) supplies all larynx muscles with the exception of the cricothyroid muscle as well as the esophagus and trachea.

Due to its special course and its important function, it is of great clinical importance (→ recurrent palsy ).

The Rami tracheal (trachea branches) and Rami bronchales (bronchial) form at the root of the lung together with the sympathetic fibers of the sympathetic trunk of the pulmonary plexus (lung braid). Its sensitive fibers from the vagus are of great importance for the regulation of breathing and for the cough reflex . The parasympathetic fibers cause the bronchi to narrow .

The fibers that extend into the abdominal cavity via the anterior vagal trunk ( ventralis ) and posterior vagal trunk ( dorsalis ) parasympathetically supply the majority of the abdominal organs ( stomach , liver , kidneys and small intestine ) up to and including around two thirds of the large intestine , up to the so-called Cannon-Böhm point in the transverse colon . They also convey visceral sensitive information.