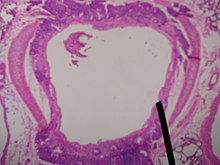 Fine tissue section through a bronchus

The airways in the lungs are combined with the bronchial system . It can be divided into a conductive and a respiratory section.

The air-conducting (conductive) part is solely responsible for the transport of the inhaled and exhaled air. It is part of the anatomical dead space of the bronchial system. It includes the bronchi and the lobular and terminal bronchioles. The respiratory section, on the other hand, consists of the bronchioli respiratorii and the ductus alveolares with pulmonary sacs (alveoli) . It corresponds to the proportion of the bronchial tree that is involved in gas exchange.

Since behind the sternum lying heart protrudes into the left side of the thorax, the left lung is smaller than the right and has only two so-called lobe , while the right lung has three. The left main bronchus thus divides into two lobes and the right one into three, each with a diameter of eight to twelve millimeters. The lobe bronchi divide - according to the structure of the lungs into segments - into segment bronchi , which are numbered on both sides in order to facilitate communication between doctors. 7 and 8 on the left form a single lung segment with the number 8, so the segment bronchus 7 is missing on the left.

Each segment bronchus is divided into two so-called rami subsegmentales . Further divisions take place up to a diameter of 1 mm and only up to this point does the bronchial wall contain cartilage in order to ensure that the bronchi remain open and thus the entire lungs are ventilated. As the division progresses, goblet cells and ciliated epithelium decrease, and a ring-shaped muscle system forms under the mucous membrane . The contraction of the same ( bronchoconstriction ) can lead to spastic bronchial asthma . 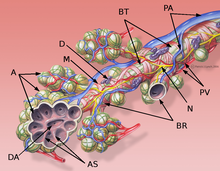 With the loss of the wall cartilage, the corresponding tubes are now called bronchioles ( bronchioli ). They have a single-layer (mostly isoprismatic) ciliated epithelium which, in contrast to the bronchi, no longer has goblet cells. The opening of the lumen is now only guaranteed by the pull of elastic fibers . The bronchioles divided into each 4-5 Endbronchiolen ( terminal bronchioles ), and this again in respiratory bronchioles , which are 0.4 mm long and about 1-3.5 mm wide. In places, the wall of which is already of alveoli formed (alveoli). The walls of the next alveolar ducts ( ductus alveolares ) consist only of alveoli. They end in the alveolar sac .

Terminal bronchioles, respiratory bronchioles and alveoli essentially form the basis for the division of the lungs into lobules ( lobules ). In the case of diseases, fluid can collect in the loose connective tissue between these lobules, the interlobular connective tissue, which is used for the necessary deformability of the lungs. When there is massive leakage of fluid from the pulmonary capillaries into the connective tissue space, the interstitium , and into the alveolar space, this is known as pulmonary edema . Four stages are distinguished depending on the severity. Air can also penetrate here and thus lead to interstitial emphysema .

Common bronchial diseases are chronic obstructive pulmonary disease (COPD), bronchitis or obstructive pulmonary emphysema . An inflammatory disease of the airways, characterized by bronchial hyperreactivity and variable airway obstruction, is bronchial asthma . An acute airway obstruction can be caused by a bronchospasm , by excessive secretion of thick mucus and by an edema of the bronchial wall to the bottom of a bronchial hyperreactivity. The lung cancer (lung cancer) is 25%, the most common cancer and is the most common cause of cancer death in men.

Bronchomalacia is a congenital malformation .