This article deals with the term “motor skills” in general, for the rhythm of the same name see Motor skills (music) . 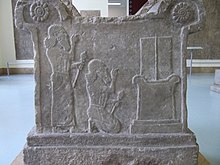 Assyrian King Tukulti-Ninurta I in two stages of movement, 13th century BC BC, is considered to be the earliest representation of movement

In accordance with its ambiguity, the term motor skills assumes different meanings in different areas of application, some of which differ from the original literal meaning. In the field of science, neighboring disciplines and related terms were also born, such as motology or (applied) kinesiology , which, with their choice of terms, document their independence in addition to movement and motor science :

The motor skills are determined by numerous components. Their functionality and interaction make up their quality, above all that of the basic physical characteristics , coordinative skills and personal charisma .

Most of the components have already been researched and can be objectively assessed using special experimental methods. You leave z. B. Conclusions about the motor predisposition, the motor development level, gender-specific differences, the ability to express themselves or the motor learning progress. There are a large number of more or less useful motor test offers that are to be critically questioned by the user on the sub-areas of basic properties (strength, speed, endurance, etc.), on the basic coordinative skills (coupling ability, reactivity, anticipatory talent, etc.) or on the motor requirements of individuals Sports areas (athletics, team games or winter sports), i.e. for general and sport-specific motor skills. The movement coordination component is of particular importance because of its high significance for the overall complex of motor skills.

In neurology , disorders of the muscles and / or the nervous system can be detected by analyzing movement sequences and reflexes .

The sensorimotor (also sensumotor) is interested in the connections between sensory impressions and muscle activity. For example, she examines the complex connections between visual and tactile perceptions, nervous stimulus transport and motor processes. It is about specific control and regulation systems. The methods are derived from cybernetics .

The psychomotor makes the interrelationships of spiritual frame of mind and sensibilities of the body to her research topic. She deals with the forms of expression characteristic of the personality such as speaking mode, gestures, facial expressions, posture, walking style and works out corresponding typologies.

The Motology is the youngest branch of motor skills science. It broke away from psychomotor skills as an independent work area and turns to particularly conspicuous children with learning and behavioral disorders (hyperactivity, lability). Motodiagnostics , motopedagogy or mototherapy were created as sub-forms .