Overview of the human nervous system

The nervous system ( Latin systema nervosum ) comprises the entire nerve cells and glial cells of an organism in a common context. This organ system of tissue animals has the task of receiving changes in the external and internal environment of an organism as a signal, relating them to one another and comparing them with previous ones.

In this way, it can cause changes in the organism as reactions that enable better adaptation to changing environmental conditions. In this way the nervous system realizes the irritability and excitability of a multicellular animal being, which are the basic characteristics of its life .

In the course of evolution and with the higher development of individual departments of the animal kingdom, a clear tendency towards concentration and the associated specialization of parts of the nervous system can be observed. While in primitive animals some individual neurons still have special functions, in highly complex nervous systems up to several billion neurons perform special tasks in a network. In nervous systems with central ganglia , the conduction of the neurons can be divided into afferents and efferents .

The relatively homogeneous nerve networks of cnidarians are considered to be the most primitive nervous systems . In cnidarians one finds pulp cords . Flatworms and roundworms have a cord-shaped nervous system. In the course of further development, the process of cephalization began.

For organ system nervous system in a broad sense includes the sensory organs , with receptors are fitted and thus the stimulus recording are used, whereas the sensory nerve and motor nerve of the transmission of impulses serve. 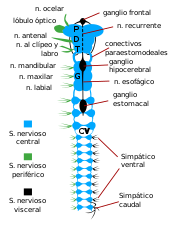 The arthropods already develop higher processing centers in the form of several nerve nodes ( ganglia ). These ganglia are connected to one another like a rope ladder by two nerve cords , which is why one speaks here of a rope ladder nervous system . In most of these animals, the upper throat ganglion is particularly large. It already takes over the functions of a “ brain ”, especially the processing of sensory stimuli. The ganglia of the body segments often control the movements of the leg and wing muscles largely autonomously. The rope ladder nervous systems (with the exception of the upper pharyngeal ganglion) are located below the digestive system. Therefore one speaks of the abdominal marrow . 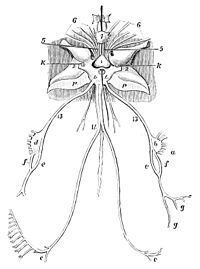 A nervous system consists of networked nerve cells and glial cells . In higher living beings, the nerve tissue consists of a network of neurons whose activity is supported by glial cells. By modulating the extracellular concentrations of ions and transmitters as well as the regulation of the local blood flow, on which the oxygen supply and the availability of hormonal neuromodulators (e.g. NO) depend, they also influence the signal transmission from neuron to neuron.

Diseases of the nervous system usually only appear in the course of life. They have far-reaching consequences and restrict freedom of action.