Flatworms or plathelminths (Plathelminthes, also Platyhelminthes from Greek : platys = flat; helminthes = worms) are simple, bilaterally symmetrical, flattened, worm-shaped, invertebrate animals. Most of the species are parasites , although there are also wild, predatory species. Numerous properties make it possible to specialize as a parasite or predator.

Of the four classes of platelet worms (cestodes), flukes and hooked flukes , i.e. the parasitic forms, are also grouped together to form the sub- strain of Neodermata . The class of the vortex worms includes all wild species.

Compared to the cnidarians , the flatworms have undergone a number of evolutionary developments:

The single-layer, rarely multi-row epidermis (epidermis) of flatworms is very rich in glands and originally covered with cilia . The gland cells lie within the basal matrix below the epidermis. The secretion channels of the gland cells penetrate the epidermal cells or emerge between them. A true cuticle is very rare, but there are hardening of the epidermal cells ( false cuticula ) or stiffening of the basal matrix.

Flatworms have a skin muscle tube that supports the body. It consists of the epidermis, an external circular musculature and an internal longitudinal musculature. Between these two muscles there are usually two layers of crossing diagonal muscle fibers. The muscle fibers are originally mononuclear and of the smooth invertebrate type. There are no cavities in the skin muscle tube itself.

Flatworms are also called parenchymal worms because almost all of them have a filling tissue called parenchyma between the intestine and body wall ( mesodermal connective tissue) in which all organs are embedded (= acoelomat), with which the platelet minths as the simplest strain reach the level of organization of organs. In contrast to the coelenterates, triblasty is present in platelets; This means that the mesodermal parenchyma lies between the ectodermal epidermis and the endodermal digestive epithelium. This parenchyma consists of an extracellular matrix and various cell types (neoblasts, muscle cells, parenchymal cells). The cytoplasm of the parenchyma also serves as an intracellular hydrostatic skeleton. A spacious pseudocoel occurs only in some microturbellariums . The suction cups of the parasitic forms are formed from parenchymal muscles and the integument . Especially in the parenchyma there are neoblasts , i.e. undifferentiated stem cells. These are important for cell reproduction in the epidermis. They migrate into the epidermis and thus form a new body cover when the parasitic forms develop after the loss of the original epidermis. Hence the name Neodermata comes from.

Flatworms have a rope ladder-shaped nervous system . A changing number of nerve cords on the ventral side connect to the front of the head to form nerve nodes ( cerebral ganglion ). The longitudinal strands are often regularly connected at right angles (orthogonally) by commissures . Commissures, cerebral ganglion and nerve cords make up the central nervous system (CNS). The peripheral nervous system is formed by nerve fibers arranged in a mesh or felt-like structure that are connected to the central nervous system. Most platelets have a multitude of sense organs. This is also the case with parasitic forms. Above all, cilia receptors with a wide variety of fine structures, different types of pigment cup cells and statocysts are common.

Flatworms have neither a blood or circulatory system nor organs for gas exchange with their environment. Only a few flukes have an endothelial- lined canal system between the intestine and the tubules of the protonephridia . A muscular, glandular pharynx leads directly into a ramified digestive system, from which nutrients can diffuse directly into all cells. The intestine usually ends blindly, but with some parasites (e.g. tapeworms ) it is completely regressed. In these forms, the nutrients are absorbed through a specialized body surface. Digestion takes place both intra- and extracellularly. Phagocytic cells and exocrine glands alternate. With the exception of Acoelomorpha, the excretory organs are mainly protonephridia , but more rarely also paranephrocytes .

Oxygen diffuses from outside into the cells ( mitochondria ). In order to achieve optimal diffusion , especially the large parasitic platelets are strongly flattened (naming), so that the diffusion distance is reduced to a minimum. Small free-living platelets, on the other hand, are often round.

Only about a quarter of flatworms are free-living. The wild species are often found in fresh water and in the sea on rocky coasts and reefs (sand, mud, algae growth). They live benthically, that is, they are ground-oriented. There are a few species that live terrestrially, especially in the tropics and subtropics. Free-living flatworms are considered to be the most pristine Bilateria and have a size between 1 mm and 50 cm (Landtriclade Bipalium kewense in China or freshwater planariums of Lake Baikal ).

Flatworms are mainly known for their parasitic way of life. Particularly flukes and tapeworms have the people or the pets as final or intermediate host . Vertebrates are predominantly used as final hosts , while the intermediate hosts are often invertebrates, especially snails and arthropods . There are also endoparasitic and commensal species among the turbellarians . Parasitic species often grow to be several inches long. The largest is up to 25 meters long - it is the fish tapeworm Diphyllobothrium latum .

Two flatworms before mating. The double penis is clearly visible in both individuals.

The flatworms are primarily proterandric hermaphrodites and normally reproduce sexually. The complexity of the reproductive organs can be very high. The fertilization always takes place internally and there is always a penis for the transfer of the sperm. The genital orifices can be separate, but they can also open into a common chamber. Sex cells are originally free in the parenchyma or at the base of the intestine, or they are derived therefrom in sacred gonades formed by envelope cells. The yolk is originally enriched by the egg cells themselves, from which it is derived from specialized yolk cells (vitellocytes) in most platelets in the yolk (vitellarium). In parasitic forms, the yolk ducts, fallopian tubes , receptaculum seminis and shell glands converge in the ootype. There the sperm, egg and yolk are wrapped in the egg shell and transported into the uterus .

The Mehlis gland , named after Eduard Mehlis , which surrounds the ootype , is also found in the sexual system of female tapeworms and flukes; its function is still controversial.

In parasitic flatworms, larval stages of development are the rule; however, larvae are less common in free-living platelets. Müller's, Goettesch's and Luther's larvae of free-living forms are seen as secondary developments. The direct development without the larval stage is considered to be the more original development. Larval stages are z. B. Miracidium , Zerkarie , Oncosphaera or Oncomiracidium .

However, Thomas Hunt Morgan (1927–1933) already reported the possibility of asexual reproduction through transverse division with previous differentiation of the new organ systems ( paratomy ) or without previous differentiation ( architomy ). Occasionally, some free-living forms also bud at the rear end. Today cloning by parthenogenesis (virgin generation) is also known among the Trematoda .

For a long time, flatworms were viewed as particularly primitive bilateria (animals that are symmetrical on both sides). In evolutionary reconstructions, early flatworms were therefore often depicted as the direct descendants of certain radially symmetrical animals (e.g. the comb jellyfish ) and corresponding homology relationships were assumed (e.g. formation of the typical flatworm parenchyma from the connective tissue mesogloea of ​​the comb jellyfish). At the moment, these models are only valid to a limited extent, since flatworms do not represent an early bilateral branch in molecular biological pedigrees - they could even be secondarily simplified forms. Only a certain former group of flatworms, the Acoelomorpha (see also section “Systematics”), branches off very early and could thus represent primeval Bilaterians. It is hoped that research into the Acoelomorpha will provide clues to the evolutionary development of the Bilateria.

Apart from questions of evolutionary biology, specific representatives of turbellarians have traditionally played an important role in research, see the article on strudelworms . 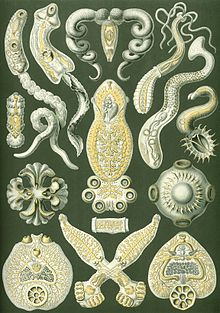 Within the flatworms a distinction is made between four classes with about 35 orders , which comprise about 20,000 species :

The first three taxa, the parasitic flatworms, are grouped under the name Neodermata . The vortex worms include all free-living species of flatworms, but are a paraphyletic group, that is, they have a common ancestral form, but do not contain all taxa that are descended from this ancestral form. Instead, the flatworms are now divided into two monophyletic groups, the Catenulida and the Rhabditophora , which also include the Neodermata:

The probable family relationships are shown in the following cladogram :

The Acoelomorpha , originally counted among the vortex worms, are now considered a sub- strain of the Xenacoelomorpha .