This article covers the biological concept of cloning . For more meanings see clone .

All plants have the possibility of natural cloning.

In zoology and botany on the one hand and reproductive medicine and cell biology on the other hand, different terms are called cloning. For example, zoology and botany understand cloning as the partly natural and partly artificial creation of new, inherited offspring from larger tissue or organ units of an organism. Single-celled animals, for example amoebas and paramecia , some lower animals , for example polyps , all bacteria and all plants have the possibility of cloning for asexual, i.e. H. vegetative reproduction by nature - cloning makes a significant contribution to the reproduction of these living things. In higher animals, vegetative reproduction is due to the increasing complexity (i.e. the increase in the number of cells, the permanent and largely irreversible differentiation of cells and the formation of organs from tissues) as well as the exclusively heterotrophic diet is no longer possible. In amphibians , lost extremities can under certain circumstances regenerate completely, but the growth of a complete individual from an extremity, for example a leg, is impossible. 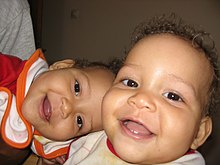 In contrast to this, in reproductive medicine and cell biology, cloning in the narrower sense is the artificial creation of a complete organism or essential parts of it, based on genetic information ( DNA ) taken from an already existing organism. In an intermediate step, the extraction or generation of totipotent cells and a limiting dilution cloning are necessary, usually embryonic stem cells . In all cases, an ontogenesis (development) can be initiated in this way , which leads to a new, genetically identical individual, whereby a clone is formed together with the donor individual. The normally necessary process of fertilization (fertilization), in which two haploid ("half") genomes of two individuals are combined to form a new diploid chromosome set ( sexual reproduction ), is avoided.

In higher organisms, strictly speaking, all cells are clones of the fertilized egg cell ( zygote ) despite their different functions . Cloning ( vegetative reproduction ) is therefore a prerequisite for the formation, integrity and function of a multicellular organism in which all cells carry the same genetic material.

The natural counterpart to artificial cloning is the creation of identical twins by dividing the zygote and the separate development of the “daughter zygotes” into independent embryos.

In agriculture, asexual, i.e. H. vegetative reproduction, the cloning of crops, a very long tradition. The aim is to ensure that the genome of cultivated plants, which are usually obtained by breeding and have certain genetically determined properties, is not changed by reproduction. For example , new potato plants emerging from tubers are clones, as are all bulbous plants or strawberry plants obtained from cuttings . The entire viticulture is also based on cuttings , and grape varieties are clones in the biological sense. The same applies to all apple varieties and most other types of fruit that are propagated vegetatively through plant grafting.

In the case of perennial crops, such as vines, mostly clone-pure planting material is placed on the market, i. H. all vines of a given clone are descended from a single mother plant. This ensures that the entire stock within a culture, such as a vineyard, is as homogeneous as possible. Clone-only cultivation is sometimes associated with uniform wines, which is why some winemakers are now planting clone mixtures, i.e. different clone origins, for example of the Riesling variety.

In cell biology and reproductive medicine

In embryos of higher organisms, one of the ways to make clones is to take cells before the 8-cell stage. Theoretically, the production of eight genetically identical organisms that together form a clone is possible by this method.

The cloning method used today is based on the natural development of a new organism after nucleus transfer of the genetic material into a normal egg cell. So far, there is no method with which one could produce a new, identical, adult animal from an adult animal .

For a nucleus transfer, a cell is removed from the organism to be cloned and the cell nucleus is isolated from it. This nucleus is inserted into an unfertilized egg cell whose nucleus has been removed. To stimulate the natural program of further development, the egg cell is exposed to either an electric shock or a chemical stimulus.

Depending on the type of further use, the cell is now handled differently, see the relevant sections.

In therapeutic cloning , the embryo is destroyed after a few cell divisions and the individual cells are brought to further growth in a culture . With the help of suitable chemical and biological stimuli ( growth factors ), any type of tissue, perhaps even entire organs, can be grown from these stem cells, or the stem cells can be introduced directly into the patient's body. In January 2008, a US research group reported in a specialist article that they had succeeded in cloning human cells for the first time. The blastocysts developed alleging professional articles until 4 days after cell nuclear transfer.

The advantage of these cloned embryonic stem cells, on the one hand, compared to adult pluripotent stem cells, is the (currently) greater variety of cultivable tissue types and, on the other hand, compared to foreign, already existing embryonic stem cells (e.g. from surplus embryos from IVF attempts) in the largely complete genetic identity of these stem cells with the patient (only the genome of the mitochondria (approx. 0.002% of the total genome) does not correspond to the genome of the patient in the case of a foreign egg donation). An immunological defense reaction of the recipient body is largely excluded. Dangers such as the development of tumors ( cancer ) from these stem cells cannot yet be assessed and would probably have to be clarified before using this method on humans.

In reproductive cloning , the embryo is carried to term by a surrogate mother . The method of nucleus transfer has been successful in many mammals. 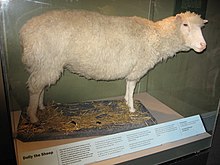 The sheep Dolly was the first cloned mammal (exhibited at the Royal Museum of Scotland).

The yield, i.e. the number of organisms actually developed in comparison to the total number of cells that were subjected to the nucleus transfer, was initially very low. Only a few parts per thousand to one percent of the egg cells produced in this way developed into embryos and fetuses and were born healthy. Epigenetic phenomena ( imprinting ) were assumed to be the reason for the high error rate .

The applied since the 1990s technology of cloning in particular enables the uniform multiplication of deemed useful cultivated plants and animals, without the previous in all methods of cultivation following variation having to accept.

Since 2014, transgenic pigs have been cloned as test animals for the pharmaceutical industry. In these animals, the DNA was modified in such a way that the animals are particularly susceptible to certain diseases such as Alzheimer's and are suitable for testing drugs. The cloning success rate is 70-80%.

In 2006 Panayiotos Zavos and Karl Illmensee reported in the Archives of Andrology that they had transferred the genetic material from body cells of an infertile man into 16 egg cells (13 cow egg cells and 3 from his wife) for the first time in the USA. In addition to seven of the cow cells, an embryo also developed from one of the human egg cells. That one was inserted into a uterus, but from which no pregnancy developed.

In 2008, the American fertility specialist Samuel H. Wood implanted his own skin cells in embryos, but subsequently destroyed them. Although the pluripotency of these cells has not been investigated, he is considered to be the first human to clone. In 2013, pluripotent human stem cells were obtained from donor cells of children and, heart, liver and nerve cells into specialized cells of the pancreas as well as blood by nuclear transfer developed . In 2014, a cell nucleus transfer was carried out for the first time using human cell nuclei from adults.

There is currently broad consensus around the world that reproductive cloning should be outlawed and prohibited. On the other hand, there is a bitter dispute over the admissibility of therapeutic cloning, which was even fought at the UN. There, the legal committee was unable to agree on a convention banning cloning, because around 60 states under the leadership of Costa Rica and the USA wanted to combine this with a worldwide ban on therapeutic cloning. Nor did Belgium's opposing proposal find the necessary two-thirds majority to leave the regulation of therapeutic cloning to the individual states. On March 8, 2005, a non-binding declaration was drawn up that leaves this dispute in the balance.

This does not mean, however, that this form of cloning is inadmissible for all time, because the legislature (Bundestag and Bundesrat) could change the Embryo Protection Act accordingly. That would only be ruled out if therapeutic cloning also violated the human dignity of the embryo in vitro.

This question of the fundamental rights and bioethical status of an embryo in vitro before implantation in the womb is hotly contested and has not yet been clarified. The prevailing opinion assumes that with the fusion of the pronuclei of egg and sperm cells to form the main nucleus of the zygote, human life arises, which from then on develops as a human being and which therefore also has the protection of human dignity according to Art. 1 GG. This earliest point in time, from which life protection appears to be justified in any case, is also the basis of the basic idea of ​​the Embryo Protection Act.

However, in Germany too, the view that the protection of life in the Basic Law can be used with nidation , i.e. the implantation of the embryo in the maternal organism, is advancing . This is suggested by the findings of medical anthropology, according to which an interaction between the embryo and the mother's body is necessary for the embryo to develop into a human at all. Without this impulse, without nidation, a person never emerges; the embryo develops into nothingness, as it were. This view corresponds to the current legal situation in Great Britain .

The Max Planck Institute for Foreign and International Criminal Law has compiled an overview of the legal situation regarding cloning in individual countries of the European Union .

Cloning in Art and Literature

Many media are also increasingly concerned with the immediate ethical consequences of cloning. In the US-Canadian film The 6th Day, for example, cloning of deceased pets is a common business, but humans forbid it. The German film Blueprint , a film adaptation of the book of the same name by Charlotte Kerner with Franka Potente , illuminates the life of a pianist and her cloned daughter. The US film Die Insel tells of clones that are grown and manipulated by a corporation as a kind of spare parts store. In Ken Follett's novel The Third Twin , human cloning also plays a major role. Through her research, the protagonist accidentally discovers a pair of twins who do not know each other. As the story progresses, it is revealed that there are a total of eight clones that were created by the military to create a kind of super soldier.

The German author Andreas Eschbach examines cloning in his non-fiction book The Book of the Future and in the youth novel Perfect Copy . In the novel Everything We Had to Give by Kazuo Ishiguro , the heroes are clones who are supposed to donate their organs to normal people. The first novel on the subject of the clone as a spare parts store was published in 1992: Duplik Jonas 7 by Birgit Rabisch .