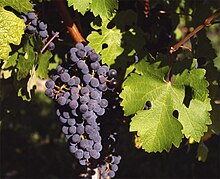 The type of plant from whose fruits wine is made is the noble grapevine ( Vitis vinifera ). Like most cultivated plants , it comes in different varieties , which are known as grape varieties in viticulture . Taste, structure and other properties of a wine such as shelf life and development potential depend on the grape variety, but they are also influenced by the location ( soil properties and climate ), the weather and the development of the vintner .

The grape variety is also called ampelography . It used to have to be limited to the detailed description of the individual varieties. Traditional descriptive features are the shoot tip (shape, hairiness ), the young leaf, the adult leaf ( leaf blade , petiole, perforation of the leaf margin, etc.), grape size and shape , berry size and shape and berry color. Today the ampelographers also deal with the clarification of the relationships between grape varieties on the basis of DNA analyzes .

Since about 5000 BC 8,000 to 10,000 grape varieties were created through breeding from wild vines. Of these, around 2,500 are approved for wine production in the various countries. Many are seldom grown today, and only a few hundred grape varieties are important, even less of national importance.

Classification according to purpose

When it comes to grapes, a distinction is made between wine and table grapes and grapes for raisin production . There are also ornamental grapes that are not suitable for human consumption.

For winemaking, a distinction is made between red wine and white wine types . Each grape variety has characteristic aromas . That is why two wines, even if they were made in places thousands of kilometers apart, have a great deal in common, provided they are made from the same grape. Not all wines are based on only one type of grape, for example , red Bordeaux usually represents a blend of at least three. In addition, red grapes are not necessarily only used to make red wine, but also white wine, namely the Blanc de Noirs . With many red grape varieties, the pulp is not red, but the red color is only in the skin. Also rose wine comes from red grapes.

Classification according to the time of maturity

Whether a grape variety is suitable for a certain location essentially depends on the time of ripening. From today's perspective, the time of ripening is characterized by an optimal ratio of sugar to acid . Each grape variety can be assigned a minimum period between flowering and maturity. This time is relatively short for early-ripening varieties, and much longer for late-ripening varieties. Early-ripening varieties are used in growing areas to the north. However, these varieties would turn out to be completely inharmonious in southern cultivation areas, as although the sugar content is high enough with sufficient sunshine, other ingredients that are absorbed through the roots cannot be sufficiently enriched. Late-ripening varieties are used here.

Since the terms early and late ripening were used inconsistently in the growing areas, the French Victor Pulliat presented a uniform classification at the end of the 19th century . As a reference grape variety , he took the Gutedel, which ripened very early, and compared other grape varieties with this variety. The must weight was introduced as a yardstick . The basis was the collection of grape varieties as they were created at important scientific institutes. Pulliat chose a scale with five categories:

Newer evaluation models were presented by the Americans Winkler and Amerine from the University of California at Davis. They looked at the heat sums of different growing areas and combined minimum heat sums with the possibility of growing certain grape varieties. According to Winkler, the total heat is the sum of the daily mean temperatures above 10 ° C.

Classification according to resistance

For organic viticulture and integrated viticulture, the division into fungus-resistant and insufficiently fungus-resistant varieties is important. However, this is always only a partial resistance. Since the 1960s u. a. the red wine varieties Regent and Cabernet Cortis as well as the white wine variety Johanniter specially bred for resistance to fungi. The abbreviation " PIWI " is sometimes used for such varieties, but they are also referred to as resistant varieties.

Other fungus-resistant grape varieties that were cultivated in Rhineland-Palatinate in 2011 on a total of 1768 hectares (= 2.8% of the planted vineyards) are Phoenix , Cabernet Blanc , Solaris , Saphira , Pinotin , Cabernet Cortis , Cabertin , Orion , Muscaris , Prinzipal , Staufer , Helois , Bronner , Bolero , Sirius , Villaris , Prior and Souvignier gris .

Classification according to relationship

Since DNA analysis has become possible, grape varieties can also be grouped according to their genetic relationship. 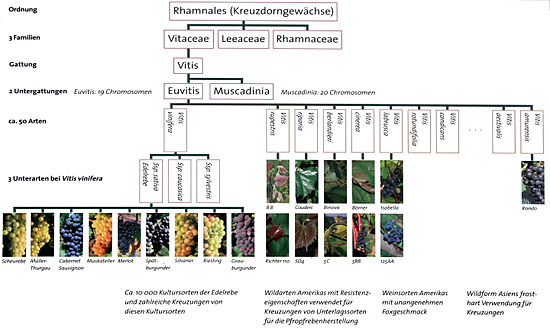 The following ranking refers to the global viticulture. The worldwide wine-growing area is (as of 2000) about 7.9 million hectares, which corresponds to 79,000 km². Almost 5 million hectares (50,000 km²) of this are in Europe.

It is difficult to rank the most cultivated grape varieties. The figures are based on statistics from different years and were collected using different methods. For example, some varieties are grouped together in some countries and not in others. Individual varieties are also promoted or withdrawn based on preferences or legal requirements. For this reason, caution should be exercised when making such a comparison and it is not possible to create an unreservedly valid list.

Ranking list of vineyards for various uses (as of 2015)

A grape variety survey by the OIV in 2015 resulted in the following information. For the Kyoho variety, the figures from China were estimated on the basis of press releases. 13 varieties represent approx. 33% of the world wine stock and 33 grape varieties 50% of the vineyard area.