The title of this article is ambiguous. Further meanings are listed under winemaker (disambiguation) .

Weinhauer is a redirect to this article. For the German historian see Klaus Weinhauer . 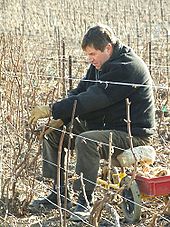 The Rebmann from Jost Amman's Book of Estates (1568)

Weingartman by Hans Lederer in the house book of the Mendelsche Twelve Brothers Foundation , around 1425

Winzer (including wine ) is the one with the wine-growing profession connected.

The term winemaker comes from the Latin vinitor (winemaker / grape picker) or vinum ( wine ). Other terms are also used for the profession in the German-speaking area , such as Weingärtner or Weinzierl in Bavarian , Weinhauer in Austria or Weinbauer especially in Tyrol . The name Häcker is also common in Franconia . Rebmann , Weinmann (Weimann, Weihmann) or Weingartner (Weingärtner) as well as the regional variants Wingerter ( Palatinate ) and Wengerter ( Württemberg and Lower Franconia ) are obsolete as a professional term and only known as family names .

A winemaker tends and cultivates the grapevine. The tasks after the grape harvest, such as the production and marketing of the wine, are also part of the job description of the winemaker. Most of the winemakers are self-employed as operators of a family business.

In order to improve sales opportunities and to rationalize operations, winegrowers have formed winegrowers' cooperatives .

In Germany, Switzerland and Austria, winegrowing is an agricultural training occupation with a three-year vocational training. Well-known in Germany are the state teaching and research institute for viticulture and fruit growing Weinsberg and the Geisenheim University . The training allowance in Germany averages around € 520 in the first, € 575 in the second and € 615 in the third year of apprenticeship. In Austria, viniculture and cellar workers are trained at their own schools . The higher education institution and Federal Office for Viticulture and Fruit Growing in Klosterneuburg offers a five-year training course with a Matura, the only one of its kind in Austria.

According to the usual criteria for further training to become a master , that of a master vintner also follows . Prerequisites are completed relevant vocational training, usually as a winemaker, and at least three years of relevant professional experience.

Study of viticulture and oenology

In Germany you can study viticulture and oenology (cellar management) at the Hochschule Geisenheim University .

Since 2009 there has been a dual study course in viticulture and oenology in Neustadt an der Weinstrasse , which is offered by the universities of applied sciences in Bingen , Kaiserslautern and Ludwigshafen am Rhein as well as the Service Center for Rural Areas (DLR) Rheinpfalz . In Austria, the University of Applied Sciences Burgenland in Eisenstadt and in Switzerland the University of Applied Sciences Western Switzerland / École d'ingénieurs de Changins offer courses in this category.

The patron saints of the winemakers are St. Cyriak , one of the fourteen helpers in need , as an aid against frost and storms, as well as St. Urban von Langres , who is often confused with the saint and Pope Urban I , as a helper for healthy vines. Both patrons are often depicted with a bunch of grapes or a vine in hand.