The name Lower Franconia refers to its relative position on the Main . Lower Franconia lies on its lower reaches, Upper Franconia on the upper reaches and Middle Franconia in between. This name goes back to the formation of the "Mainkreis" in the course of Count Montgelas' 1808 constitution of the Kingdom of Bavaria . The division of the territories was adapted to the French model and was primarily based on river names. Since the Main flows through Lower Franconia, the region is also known by the locals as " Main Franconia " (and " Weinfranken " because of the viticulture). 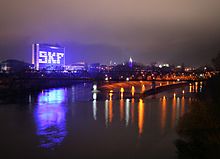 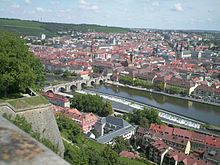 The following breakdown into independent cities and districts applied until the district reform , which came into force on July 1, 1972:

The economic focus of Lower Franconia is today in the large industrial center Schweinfurt , the service and trade center Würzburg , in Aschaffenburg , the larger medium-sized centers along the Main, in particular Lohr am Main and in Bad Neustadt an der Saale in the north of the administrative district.

The Lower Franconia Police Headquarters , together with the Federal Police and their precinct in Aschaffenburg , as well as the inspection in Würzburg, ensure security. There is also a federal police training and further education center in Oerlenbach .

The Customs maintains the customs offices Schweinfurt -Londonstraße, Dettelbach -Mainfrankenpark and Aschaffenburg, which the Main Customs Office are subordinate Schweinfurt.

The THW has 15 local branches and a regional office in Lower Franconia.

There are also 38 hospitals and specialist hospitals.

The Bundeswehr is represented by a company of the regional security and support forces (RSU) . A career advice office is located in Würzburg. There are also other locations in Volkach, Wildflecken , Hammelburg and Veitshöchheim.

There is also a university ( Würzburg ), two other universities ( Aschaffenburg , Würzburg-Schweinfurt ) and a music college .

After the transition of Franconian , to a small extent also Kurheinische and Upper Rhine areas to the new Kingdom of Bavaria , the Lower Main District with Würzburg as the capital was established on February 2, 1817 . Since January 1, 1838, the district was named "Lower Franconia and Aschaffenburg" in reference to the Duchy of Franconia , in whose former eastern part it is located (with the exception of Aschaffenburg and the surrounding area, which are located in the former western part).

Friedrich Koenig is one of the pioneers of industrial development in Lower Franconia .

The first Lower Franconian local group of the NSDAP was founded in August 1921 in Kitzingen. Würzburg only followed on December 6, 1922. The ordinance of May 20, 1938 (GVBl. 1938, 199) with effect from June 1, 1938 brought the name of the district into line with that of the spatially identical NSDAP Gau Mainfranken and the previous name " Lower Franconia and Aschaffenburg ”. The old designation "district" was also adjusted to the Prussian designation "administrative district" during the Nazi era.

After the end of the Third Reich, the name was changed again on April 9, 1946 (GVBl. 1946, p. 189) and the administrative district was named "Lower Franconia" (without the addition "and Aschaffenburg "). On April 14, 1945, the Lower Franconian NSDAP was officially dissolved.

After the Second World War, the Thuringian enclave Ostheim before the Rhön came to Lower Franconia.

Under the red head of a shield , in it three silver tips , split by blue and red; in front a slanting standard on a golden lance , quartered in silver and red and twice notched , behind a six-spoke silver wheel .

The coat of arms is based on a design by Otto Hupp from 1906. However, his suggestion was not used at the time. The district of Lower Franconia gave itself the coat of arms, which shows the most important former rule relationships in this district, only in 1961. The Franconian rake comes from the coat of arms of the cathedral chapter and bishopric of Würzburg and is today a symbol for all of Franconia . The standard made of silver and red, a racing flag , stands for the Duchy of Eastern Franconia and is also included in the coat of arms of the city of Würzburg . The silver wheel represents the electoral state and the archbishopric of Mainz , together called Kurmainz. Kurmainz had considerable influence in the Lower Maing area up to and including the city of Aschaffenburg until 1803, when the Holy Roman Empire of the German Nation was dissolved . The Mainz wheel is also included in the coats of arms of the districts of Aschaffenburg , Miltenberg and Main-Spessart .

The flag of Lower Franconia is a red and white Franconian flag with the district coat of arms in the middle.

President of the District Assembly 1954 to date

Tasks of the district of Lower Franconia

Institutions in the district of Lower Franconia

The district of Lower Franconia is responsible for psychiatric hospitals and homes in Lohr am Main and Werneck, psychiatric day clinics in Aschaffenburg and Schweinfurt and the intensive unit for child and adolescent psychiatry on the premises of the University Clinic in Würzburg. In Würzburg, the district maintains the Jakob-Riedinger-Haus, a residential and residential care home for disabled people, in Lohr, Römershag and Werneck care homes and in Münnerstadt a home for the chronically alcoholic. In addition, the district of Lower Franconia is responsible for two orthopedic specialist clinics (in Werneck and the König-Ludwig-Haus in Würzburg) and a specialist clinic for thoracic surgery in Münnerstadt. With the Dr. Karl Kroiß School, the Lower Franconia district in Würzburg maintains a support and advice center with a focus on hearing. In addition, there are holdings in other institutions, such as B. the nursing home for the blind Nürnberg eV

In order to fulfill the tasks incumbent on it in the cultural field, the district of Lower Franconia advises and supports in the areas of monument preservation, museums, theater, music, costume, cabaret and contemporary art. He arranges contacts to city and district home administrators, historical associations and cultural providers. The district has three museums in Aschach Castle near Bad Kissingen.

The district of Lower Franconia ensures the preservation, improvement and protection of the foundations of life for fish and other aquatic animals. The advisory and expert activities include the focus on angling, river fishing, fish species protection and pond management .

In the area of cellar management and technology, the Lower Franconia district advises Franconian winemakers on issues relating to wine development. Its advice and training offers make an important contribution to maintaining and increasing the quality of Franconian wine.