The name Bavarian Swabia is also widespread , as the area only comprises a little more than a third of the area that is perceived as Swabia today. This "total Swabia" is no longer territorially tangible, but has its origin in the earlier political structures, namely the early modern Swabian district and the medieval Duchy of Swabia . Bavarian Swabia is easily confused with this entire Swabian region. Similarly, what is now perceived as "the other half" of Swabia, namely Württemberg , is often incorrectly equated with the Swabian area as a whole.

Bavarian Swabia is currently the only political territory that uses the name Swabia. Although there are also smaller areas in Bavarian Swabia that belong to the Bavarian dialect area (see section on linguistic delimitation ), the tourism industry advertises with the motto “Where Bavaria talks Swabian”.

Outline before the district reform

Before the district reform on July 1, 1972, Swabia had ten independent cities and 20 districts:

District-free cities before the district reform

Counties before the district reform 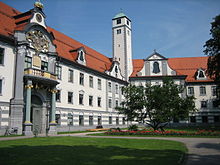 Prince-Bishop's Residence (Augsburg) (seat of the government of Swabia )

West portal of the prince-bishop's residence in Augsburg

In 1803 the Bavarian Province of Swabia was formed under a regional directorate in Ulm from Swabian areas that fell to Bavaria through the Reichsdeputationshauptschluss . Parts of it only became Bavarian two years later with the Peace of Pressburg . Other parts such as Höchstädt on the Danube have belonged to Bavaria since the Middle Ages when Ludwig the Strict inherited his nephew Conradin of Swabia , or later to Pfalz-Neuburg . In the new Kingdom of Bavaria , these parts were divided into three districts in 1808 ( Oberdonaukreis , Lechkreis , Illerkreis ), which were combined in 1817 to form the Oberdonaukreis with the administrative seat of Augsburg. In 1837, based on the Duchy of Swabia , the former eastern part of which it forms, it was renamed the District of Schwaben and Neuburg , with the District Court of Neuburg an der Donau being added to the district, while the District Courts of Aichach , Friedberg and Rain fell back to Upper Bavaria . Rain returned to the district in 1879. In 1900, as part of a reorganization of the districts, the Schwabmünchen district office was established by dividing the Augsburg district office . In 1929 the district office of Zusmarshausen was dissolved. The municipalities of this district office were then assigned to the district offices of Augsburg and Wertingen . In the Weimar Republic, beginning with the revolution in 1918, the region was the scene of intense labor disputes and strikes - statistics from the historian Claus-Peter Clasen count a total of 131 strikes and lockouts, primarily in the textile and metal industries, but also in the construction industry. The wage strikes were a continuation of the activity of the workers' movement , which increased with World War II and the Revolution and sought to improve living conditions for the working population. This movement came to an end in 1933 - social democracy and trade unions were also banned in Bavarian Swabia, and strikes were illegal. In 1938 the name Schwaben und Neuburg was shortened to Schwaben . In 1939, the district offices were renamed “uniformly across the empire” as rural districts. In 1940, the city of Donauwörth lost its status as a city in the immediate vicinity of a district. In 1944, the Friedberg district passed from the Upper Bavarian administrative region to the Swabian administrative region. The district of Lindau was removed from the area as part of the French occupation zone in 1945 , but reintegrated in a referendum in 1955. During that time it had the historic German license plate FBY for "French Bavaria". In 1972, the city and the main part of the district of Neuburg ad Donau as well as the Fuchstal communities of the previous district of Kaufbeuren fell to Upper Bavaria and the main part of the previous district of Aichach to Swabia.

The Bavarian Swabia landscape lies in the southwest of Bavaria and extends from Ries in the north to the Bavarian Allgäu in the south. In the west, Bavarian Swabia is largely bounded by the Iller , in the south partly by Lake Constance and in the east by the Lech or Lechrain . It borders in the north on Middle Franconia , in the east on Upper Bavaria , in the south on Tyrol and Vorarlberg in Austria , in Lake Constance on the canton of St. Gallen in Switzerland and in the west on Baden-Württemberg . The geographical center is in the village of Eppishausen . The highest peak is the Hochfrottspitze in the Allgäu Alps .

In comparison with the gross domestic product of the European Union, expressed in purchasing power standards, Swabia achieved an index of 123 (EU-28 = 100) (2015).

In contrast to the rest of Bavaria, the electricity in the area is provided by RWE AG.

In 2017 the unemployment rate according to Eurostat definition was 2.6%. Swabia is one of the areas with the lowest unemployment in the entire European Union.

Significant long-distance trade routes ran through Swabia in the pre-industrial era. These included, for example, the famous Via Claudia in Roman times or medieval trade routes across the Alps to Venice. These and other roads contributed significantly to the flourishing of trade in Swabia and the development of the cities.

With the beginning of the industrial revolution , a dense railway network was built in Swabia by the turn of the century. The subsequent construction of modern highways in the first half of the 20th century also gave the administrative district an efficient regional road network.

The second half of the 20th century was characterized by steady growth in traffic and transport services. At the same time, there was a shift from rail to road and air traffic also gained in importance in Swabia. As a result, the existing highways and the two airfields in Augsburg and Memmingen were expanded and railway lines were closed, especially in rural areas. On January 1, 1979, the route network of the German Federal Railroad in Swabia comprised around 680 kilometers of main line and 395 kilometers of secondary line .

The inhabitants of Swabia are (like the old Bavaria ) predominantly Catholic , although there is an important Protestant minority, which is mainly in the Nördlinger Ries and the former imperial city territories of Ulm and Memmingen. Except in the former imperial cities of Augsburg, Lindau, Memmingen, Nördlingen, Kaufbeuren and Kempten, the Lutheran denomination only survived in a few places that were once imperial knighthoods ( Bächingen an der Brenz , Burtenbach , Haunsheim ). The Catholic Christians are mainly represented by the diocese of Augsburg , in the district of Donau-Ries partly also by the diocese of Eichstätt . The inhabitants of the Allgäu are almost exclusively Catholic.

There is also a Jewish community in Augsburg. There are also Muslim communities in the larger cities such as Augsburg, Kempten, Memmingen, Neu-Ulm or Kaufbeuren . Members of various Orthodox Christian churches also live here . 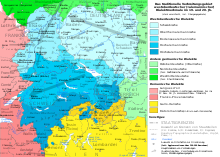 The traditional distribution area of ​​West Upper German (= Alemannic) dialect features in the 19th and 20th centuries. Bavarian Swabia is located in its northeastern part

The area fell to Bavaria in the years after secularization in 1803. Only the later district of Aichach-Friedberg belonged to Bavaria from the beginning (since the 6th century). Apart from the old Bavarian Aichach, Swabian-Alemannic dialects are spoken, but Swabian echoes can also be found in and around Aichach (“Konnsch, muasch” for can / must), as it is a transitional dialect typical in western Old Bavaria. In spite of this dialectal peculiarity, however, the Aichach people see themselves as Upper Bavaria.

Due to the dialect continuum, the language colors differ from the Swabian dialects spoken in Württemberg . The eastern linguistic border compared to the Bavarian local dialects is the Lech with some shifts around Augsburg, Landsberg / Lech, Schongau and Füssen. This is even visible on a map: Many places west of the Lech end in the Swabian-Alemannic -ingen while many places east of the Lech with the Bavarian -ing ending.

The Kingdom of Bavaria was still to Prussia divided into circles its territory 1806th From 1828 to 1919 there was a district councilor (h) as a representative body for Swabia ( Upper Danube district until 1837), from 1919 to 1945 the corresponding term was district council or district association day , as the name "district" was aligned with the Prussian name "district" during the Nazi era has been. In 1939 the “district offices” were renamed uniformly throughout the empire into “districts”, which the Constitution of the Free State of Bavaria ignored shortly after the Second World War. The local parliaments, called district days despite the provisions in the constitution, were re-elected in 1954 for the first time after the Second World War .

Martin Sailer ( CSU ) has been the District Assembly President since November 8, 2018 . His deputy is Barbara Holzmann ( Greens ). Further deputies are Johann Fleschhut ( FW ), Edgar Rölz and Alfons Weber (both CSU ). (Sources below)

The coat of arms was approved by the Bavarian State Ministry of the Interior on October 15, 1965.

Blazon : “Under a golden shield head, inside a growing, red-armored and gold nimbed black double-headed eagle, split; at the front split by red and silver, at the back five times at an angle to the left split by silver and red, covered with a golden pole. "

The eagle of the old empire is not only intended to symbolize the Swabian imperial cities of Augsburg, Kaufbeuren, Memmingen, Kempten, Lindau, Donauwörth, Nördlingen, and (with some areas) Ulm, but also the extensive former imperial estate of the Hohenstaufen and the territories of the imperial knighthood. The shield of the Augsburg bishopric, split in red and silver, is representative of the spiritual territories up to 1803, among which the prince monastery Kempten , the abbeys Ottobeuren, Irsee, Roggenburg, Wettenhausen, Ursberg, Kaisheim and Elchingen, as well as the ladies monastery Lindau should be mentioned. The Hochstiftisch-Augsburg areas stretched from the area south of Neresheim to the Allgäu Alps, so that this symbol directly addresses a wide strip of land to the left of the Lech.
With the old coat of arms of the margraviate of Burgau , Central Swabia in particular is represented in the district's emblem with parts of the districts of Günzburg, Illertissen, Neu-Ulm and Krumbach. In addition, it is intended to commemorate all immediate secular territories in the Swabian area up to the end of the old empire, e.g. B. to the widely scattered Fuggerian areas, the property complex of the lines of the House of Oettingen around Nördlingen and finally to the old Wittelsbach areas on the Lech and Danube, as well as Wemding, Schwangau and Mindelheim. Instead of heraldic references to the Wittelsbachers, the Swabian peculiarity of the present case was the coat of arms of the margraviate of Burgau, which was part of the Upper Austrian margraviate up to 1805, which also makes a good artistic reference to the Augsburg bishopric coat of arms, which is related in color.

The flag is striped red and yellow with the district coat of arms.

Regional partnerships exist between the Swabian district and the Mayenne department in France (since 1987) and Bukovina in Romania and the Ukraine (1997).

The district has set up the municipal company District Clinics Swabia and maintains vocational schools, district homeland maintenance, research and advice centers for traditional costumes and clothing culture as well as for folk music. He is also the sponsor of the KulturLand Ries Museum (formerly Rieser Bauernmuseum Maihingen) and the Oberschönenfeld Museum and, through a special-purpose association, is involved in the Swabian Farm Museum in Illerbeuren .