The Mayenne [ majɛn ] is the French department with the atomic number 53. It is in the northwest of the country in the Region Pays de la Loire and is named after the river Mayenne named. The capital of the department is Laval . 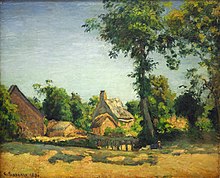 The Mayenne department is bordered by the Manche and Orne departments to the north, Sarthe to the east, Maine-et-Loire to the south and Ille-et-Vilaine to the west .

The département is hilly country , which, according to its internal structure, is predominantly part of Brittany and, like this, consists of granite , slate and Paleozoic sandstones .

The main river is the Mayenne , which crosses the department from north to south. The two largest cities, Laval and Mayenne, are also located on it . The river valleys of Mayenne, Sarthe and Vilaine are not deeply cut and wide, the soil is mostly fertile.

Description: In blue with a red border and a continuous white wave hermlin stake, two golden lilies under a golden lion .

The department was formed on March 4, 1790 from the western part of the former province of Maine and the northern part of Anjou .

The department has belonged to the Pays de la Loire region since 1960 .

The most populous municipalities in the Mayenne department are:

The Mayenne department is divided into three arrondissements , 17 cantons and 254 communes :

Communes and arrondissements in the Mayenne department

A regional partnership with the Bavarian district of Swabia has existed since 1987 .