The Département Pyrénées-Orientales [ piʀene (z) ɔʀjɑ̃ˈtal ] ( Catalan Pirineus Orientals ; German  Eastern Pyrenees ) is the French department with the order number 66. It is located in the south of the country in the Occitania region on the Spanish border and was named after its location on Named the eastern edge of the Pyrenees .

The valleys of the Têt and the Tech widen at the eastern foot of the Canigoukette to a very fertile plain with a Mediterranean climate and lush vegetation, which is preceded by a flat coastal strip made up of debris, which forms the Côte Vermeille with the lagoon coast to the north and is developed for tourism shall be.

The population cultivates wine and olives, as well as timber and grazing.

As a transit area from or to the Iberian Peninsula , it already played an important role in prehistory ( Mensch von Tautavel ) and in ancient times (including Hannibal ). There are also isolated testimonies from the time of the Great Migration , the advancing Islam and the Visigothic-influenced architecture of the early Middle Ages . The Carolingians left hardly any traces, but the Romanesque monastery churches of the 11th and 12th centuries (including Cuxa , Elne , Canigou , Serabonne , Marcevol ) began a cultural heyday that ended in the late Middle Ages; apart from the cathedral and the palace of the kings of Mallorca in Perpignan , the Gothic and then the Renaissance and the Baroque hardly played a role in the intellectual and cultural development of the area.

The megaliths of the eastern Pyrenees consist of around 150 dolmens and only a few menhirs. The department in the extreme south of France consists of the easternmost part of the Pyrenees, and the vast plains of Roussillon. The dolmens are made of gneiss , granite and limestone and are - compared to their Spanish neighbors - rather small. The largest is Na Cristiana . The majority have a rectangular plan consisting of the end panel and two side panels on which the ceiling panel rests. The fourth side of the rectangle served as an entrance and was possibly closed with a system of wood and / or smaller stone. A few dolmens are larger and have a corridor , the sides of which are lengthened by further panels that give the dolmen an elongated shape as a whole. However, the original plans have changed many times over time. No dolmen was found intact, all of them emptied, looted, reused, sometimes in prehistory or ancient times. Often times the plates were moved or destroyed. Many dolmens have bowls often connected with engraved grooves, sometimes accompanied by engravings in the shape of a cross. If the dolmens themselves are not engraved, they may be accompanied by engraved rocks nearby. The megaliths are unevenly distributed across the department - the coastal plain is practically free of them. The most important are in Bas Conflent , Fenouillèdes , Alberes and on the Côte Vermeille ( Dolmen Na Cristiana and another eight dolmens) and to a lesser extent in Cerdanya . In Capcir and Haut Conflent there are few megaliths.

Description : Four red posts in gold , based on the coat of arms of Catalonia . 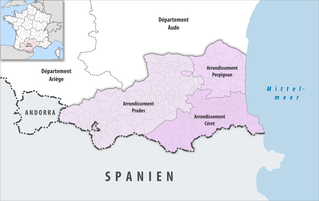 Communes and arrondissements in the Pyrénées-Orientales department

View of the Pyrenees from Saint Cyprien from

The department largely corresponds to the historical landscape of Northern Catalonia . The Catalan , the original language of the region, is now to a large extent by the French been displaced. French is the only official language, while Catalan is only taught as an optional subject in schools and the University of Perpignan and is cultivated through private initiative. Nevertheless, around 43% of the inhabitants of the Pyrénées-Orientales still speak or understand the Catalan language today. On December 10, 2007, the Conseil Général adopted a charter to promote the Catalan language ( French : Charte en faveur du Catalan ).

Roussillon is a cradle of Romanesque architecture in France. Some monasteries in the Pyrenees are of outstanding importance :

The cave of Arago , 20 km northwest of Perpignan, is internationally known as the site of fossils of Homo erectus .

Some old towns are also worth seeing:

Measurement station: Cap Béar between Banyuls and Port-Vendres at an altitude of 81 meters