The Pyrénées-Orientales department (red: the Fenouillèdes )

The town of Céret and the Pic du Canigou massif 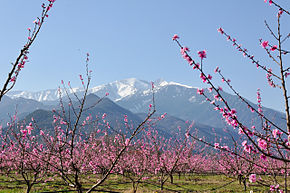 The Roussillon [ ʀusiˈjɔ̃ ] ( Catalan Rosselló ) is an old cultural landscape and a historical province in the south of France . The area corresponds roughly to today's Pyrénées-Orientales department with the city of Perpignan as the capital.

The largest city is Perpignan . Smaller towns are Elne , Collioure , Argelès-sur-Mer , Rivesaltes , Prades , Céret , and Thuir . The places Prats-de-Mollo , Font-Romeu , Vernet-les-Bains and the like are also important. a.

The “holy mountain” of the Catalans, the Pic du Canigou , is entirely in the territory of Roussillon. The Pic de Costabonne marks the border between Catalonia and France a little further to the southwest. The Massif des Albères forms the easternmost foothills of the Pyrenees.

The valleys of the coastal rivers Têt and Tech widen at the eastern foot of the Canigou massif to a fertile plain with a Mediterranean climate and lush vegetation. The coast is flat in this area, the coastline runs straight from north to south. There are lagoons, as well as further north in the area of ​​the Golfe du Lion . A larger lagoon is at Perpignan, east of Saint-Nazaire . In the north of Roussillon there is an even larger lagoon with an area of ​​more than 50 square kilometers: the Étang de Leucate , the northern half of which is part of the Aude department .

The coastline bends to the east near Argelès-sur-Mer in the south . A rocky, indented coastline begins here, which in Roussillon is called Côte Vermeille . Its southern continuation in Catalonia is the Costa Brava .

Agriculture, including fruit growing and viticulture (especially the sweet wines Banyuls , Maury and Muscat de Rivesaltes ) has traditionally played the most important role in the economic life of Roussillon; Since the middle of the 20th century, tourism has become an increasingly important economic factor.

As many testimonies from the time of the megalithic cultures prove, the area was already settled in the Neolithic .

The region was named after the medieval county of Roussillon on the northern edge of the Pyrenees on the Mediterranean . It was one of the historic Catalan counties that was created under Charlemagne to protect the Franconian Empire against the Moors on the Iberian Peninsula as part of the " Spanish Mark " . 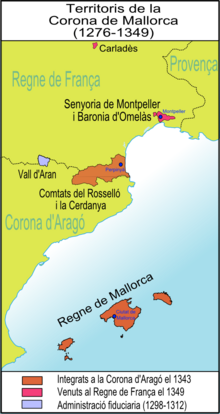 In the Middle Ages the area of ​​Roussillon was disputed between the French and the Aragonese crowns ; numerous castles were built. The Treaty of Corbeil (1258), in which the French King Louis IX. his territorial claims to which Roussillon ceded to Jaume I of Aragón , ensured legal security for a long time. In 1276, his younger son Jaume II inherited the Kingdom of Mallorca, which his father had founded in 1229 after the conquest of the Balearic island, and annexed the counties of Roussillon and Cerdagne, which also belonged to his inheritance, as well as the city and the surrounding area of Montpellier . However, the Kingdom of Mallorca only lasted until 1344; then - with the exception of Montpellier, which fell to France - it was again annexed to the Crown of Aragon. From 1462 until the Treaty of Barcelona (1493) , however, Roussillon was pledged to the French crown.

Through the Pyrenees Peace of 1659 concluded between Louis XIV and Philip IV of Spain , the County of Rosselló was separated from the rest of Catalonia and awarded to France, together with the other counties in Northern Catalonia . The " Ancien Régime " of France combined the entire area into a new province and named it after the county of Roussillon . The area of ​​the former county still roughly corresponds to the Comarca Rosselló . However, their borders do not coincide with today's administrative borders and, in contrast to the Catalan Comarques, have no administrative function.

In the course of the French Revolution , the French territory was subdivided into departments ; In the years 1790-91, the historical province of Roussillon was dissolved and replaced by the department Pyrénées-Orientales replaced the even the formerly the province next to the Roussillon Languedoc belonging Fenouillèdes includes. The name Roussillon was officially used again as part of the name of the Languedoc-Roussillon region , to which the Pyrénées-Orientales department belonged. Today this region belongs to the Occitania region . 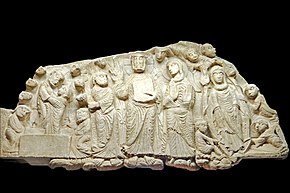 Tympanum of the Master of Cabestany (around 1180)

The use of the Catalan language ( català ), the original language of Roussillon, was forbidden by an edict of Louis XIV in 1700 and then almost completely replaced by French in public life . French is the only official language, while Catalan is taught as an elective in schools and the University of Perpignan . For several decades there have been official signs with place and street names in Catalan (e.g. Perpignan / Perpinyà), and in 2007 the Charter for the Promotion of Catalan was adopted. It is a voluntary commitment of the Conseil Général du Département Pyrénées-Orientales to protect and further develop the Catalan language.

In the Middle Ages, Catalonia was one of the leading cultural regions in Europe; in Roussillon are the formerly important abbeys of Saint-Michel-de-Cuxa and Saint-Martin du Canigou , designed in the Lombard style , the priory churches of Marcevol and Serrabone and the bishopric churches of Elne and Perpignan . The figurative lintels of the churches of St-André-de-Sorède and St-Génis-des-Fontaines mark the beginning of Romanesque sculpture in Europe; Famous beyond the borders of Roussillon is the by name unknown Master of Cabestany , who worked in the 12th century. Some churches still house the huge painted and / or carved altarpieces of the late Middle Ages, the Renaissance and the Baroque , which are otherwise atypical for France . The Fort of Salses was built around 1500 and, in terms of architectural history, stands for the transition from medieval castles to modern fortifications.

The name of the troublesome Wilhelm von Cabestany (around 1160 – after 1212) and some of his love canzons have been handed down from medieval times . Most famous poet of Catalonia was Jacint Verdaguer (1845-1902); After a trip through Roussillon in 1886, the "National Epic of the Catalans" was created under the title Canigó .

Panoramic view of the Roussillon from the Força Réal , in the background the Massif des Albères and the Mediterranean Sea