This article deals with the ancien régime in France. The period between 1712 and 1798 in the history of the old Confederation is also known as the Ancien Régime.

The medieval fortress Bastille in Paris symbolized the “old order”; its destruction in 1789 marked the beginning of the French Revolution .

Ancien Régime [ ãsi̯ɛ̃ ʀeʒim ] ( French for "earlier form of government", "old state") originally and in the narrower sense denotes the form of government of the Bourbons in France ; in a broader sense, the early modern period across Europe before the French Revolution of 1789 or before the Napoleonic Wars . Often the term is representative of absolutism .

Ancien Régime in the narrower sense 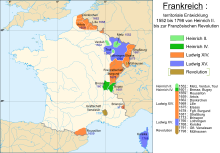 Originally, the Ancien Régime was used to describe the form of government of the absolute ruling Bourbons in the Kingdom of France . In this sense, the term established itself in historical studies at the latest in 1856 , after the French publicist and politician Alexis de Tocqueville published his essay L'ancien régime et la Révolution , an analysis of the French Revolution.

The Bourbons came to the throne for the first time in 1589 with King Henry IV and ruled for a good 200 years without interruption.

The three years between 1789, the beginning of the French Revolution , and 1792, the year of the complete elimination of the Ancien Régime, are considered a transitional period. In this the rule of the king was already broken, but the monarchy as such still existed. If one absolutely wanted to name a specific day, it would probably find itself in the field of tension between three events in 1789, namely the storming of the Bastille on July 14th, the abolition of feudal rights on August 4th or October 6th, when the king was born was forced to take his seat in Paris in the future.

The First Republic was proclaimed in France on September 21, 1792, the day after the success of the French revolutionary troops in the cannonade near Valmy . At this time, King Louis XVI. under arrest for six weeks.

The term ancien régime was originally used as a reminder of the “good old days” before the revolutionary upheavals. Talleyrand once said that anyone who has not lived through the Ancien Régime does not know the sweetness of life (“la douceur de la vie”). Today the Ancien Régime has a rather negative connotation as a name for the pre-revolutionary governmental state .

In general, the term is used for an outdated, mostly monarchical system of government that is viewed as not in line with the requirements of modernity , such as the Russian tsarist empire until 1917.