The title of this article is ambiguous. For the river of the same name in France, tributary of the Cérou, see Céret (Cérou) . 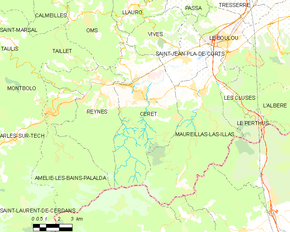 Céret (in Catalan Ceret ) is a small town in the south of France with 7798 inhabitants (as of January 1, 2017), located on the edge of the last, hilly foothills of the Pic du Canigou in the Pyrénées-Orientales department of the Occitania region about 35 kilometers southwest of Perpignan and around 180 Kilometers north of Barcelona . The city is located in the valley of the Tech River .

The name Céret is derived from Ceres , the Roman goddess of agriculture . The inhabitants call themselves les Cérétans . Also derived from Ceres is the national dance of the Catalans , the sardane , which was also known as La Ceretane in earlier times .

In Céret is the medieval Devil's Bridge , which in the 14th century was the largest bridge in the world with an arch span of 45.45 m.

Céret in France is famous throughout the country for its art museum and for its cherries . Thanks to its climatically advantageous location on the edge of the Roussillon coastal plain, the microclimate here is particularly mild in spring , so that the cherries in the area around Céret ripen earlier than elsewhere in France. The farmers use this advantage for a clever PR strategy: The French President traditionally receives the first basket . Because of the high labor costs, more and more farmers are clearing their cherry trees and planting peaches instead. Part of the agricultural land is used for viticulture . The vineyards are within the protected designations of origin Rivesaltes , Muscat de Rivesaltes and Côtes du Roussillon .

The cityscape of the old town of Céret around the church of Saint Pierre and the meager remains of the former city ​​wall , between the Place de la République and the Place de la Liberté , is unique in the entire region: the boulevards between the tall town houses are covered with huge plane trees shaded, and along the curbs of today's central main shopping street and many side streets water runs. As in the old days, it is fed into the city via various canals from higher elevations and is still used a little for street cleaning. But its cooling effect in midsummer is more important. Catherine Millet described in her scandal book The Sexual Life of Catherine M. Céret as " a city of elegance ".

It was also the special atmosphere of the town that made it a special tourist attraction from the winter of 1909. At that time, three artists stopped in Céret on their way to Banyuls , where they wanted to visit Aristide Maillol : the Catalan sculptor Manolo Martínez Hugué , the painter Frank Burty Haviland and the composer Déodat de Séverac . The icy, stormy Tramontane prevented them from continuing their journey, and so they had time to write letters to their friends and colleagues about the beauty of Céret. As a result, almost all known artists of French and Spanish Cubism visited the place and thus also contributed to making Collioure an artists' colony. Even today, Céret adorns himself with the fact that at the time it was considered the Mecca of Cubism , and those who visit the still existing, former meeting point for artists can feel an echo of this era: the Grand Café .

For tourists interested in culture who relax on both sides of the Pyrenees , the town of Céret, located in the center of the Vallespir , is a top attraction without ever seeming overcrowded. Céret can boast an important museum for modern art ( Musée d'Art moderne ), whose collection includes around 700 works by modern artists and is also worth a long journey: the collection includes more than 50 works by Pablo Picasso , more than a dozen drawings by Henri Matisse , a large-format painting by Marc Chagall as well as various works by Joan Miró , Jean Cocteau , Raoul Dufy , Juan Gris , Aristide Maillol , Chaim Soutine , André Masson , Manolo Martínez Hugué , Auguste Herbin as well as by Joan Brossa , Pinchus Kremegne , Jean- Louis Vila and others.

Of particular interest to most visitors are Chagall's gouache The Cow under the Umbrella , the 28 red-brown-yellow clay bowls by Picasso with bullfighting scenes and a drawing by Picasso, La Sardane à la Colombe .

Céret owes this collection to the painters Frank Burty Haviland and Pierre Brune , who had lived in the village since 1916, wanted to set up a museum and called on his artistic friends in the region to "donate": the works of the older artists are the museum actually donated by them. In recent times, the permanent exhibition has been continuously supplemented by the purchase of works by contemporary artists. The steadily growing collection was on display in the former prison from 1950, and has been housed in a new building since 1993.

Anyone approaching Céret from the Perpignan - Barcelona motorway on the D115 road will be surprised to take a look to the left and right shortly after entering today's town: even crossing the Tech River over a modern road bridge, one discovers one that is exactly the same high and narrow on the left and a fragile-looking arched bridge made of stone blocks and on the left a narrow arched railway bridge that is no longer fresh. The stone bridge dates from the early 14th century and is called Le Pont du Diable ('Devil's Bridge'), its only arch is 45 meters wide, and at its highest point it rises 22 meters over the river.

Another special feature are the free public appearances of a Cobla on one of the boulevards from mid-July to mid-August . This traditional, Catalan Sardana dance orchestra attracts numerous residents to the round dance every Wednesday after 9 p.m. and a modest number of tourists to watch. In Céret, the sardane is still a real folk dance for all age groups, in which seventy-year-old women, thirty-year-old men and ten-year-old children shake hands.

The war memorial on Place de la Liberté was created by the well-known sculptor Aristide Maillol (1861–1944).

Céret has been twin town of Lüchow (Wendland) in Lower Saxony since 1983 . Further partnerships exist with the municipalities of Almonte and Banyoles in Spain.