Masson studied at the age of 14 at the Art Academy in Brussels , where he lived from 1904, and continued his studies in Paris at the École Nationale Supérieure des Beaux-Arts with Paul Baudoin . When the First World War broke out , he signed up as a volunteer, which resulted in a serious injury to him in 1917.

Masson was also a close friend of Georges Bataille , who gathered the “dissident” Surrealists around him in the early 1930s. Masson was instrumental at the called Bataille launched magazine Acéphale with, the one of the fakes Elisabeth Förster-Nietzsche adjusted Nietzsche advocated -Lektüre; he was also active at the Collège de Sociologie . In 1938 he exhibited works in Paris, together with domestic and foreign artist colleagues, as part of the Exposition Internationale du Surréalisme in the Galerie Beaux-Arts.

At the beginning of the Second World War , Masson lived in Spain, then emigrated to the United States during the advance of the Germans in 1942 (at times he also lived in Martinique ) and returned to France in 1945.

There is a constant existential unrest in Masson's works, which reflects the two world wars and crises of his time. His work, which is constantly changing stylistically, radiates inventiveness and great creative power. During his time with the Surrealists in Paris in the 1920s and 1930s, Masson developed a lyrical, spontaneous, abstract style of painting (psychic automatism / écriture automatique ). Masson was one of the first painters to consciously seek access to the irrational, the unconscious. One of these works is the Vingt-deux dessins sur le thème du désir (Twenty-two drawings on the subject of desire), which were created in a very short time.

In addition to numerous paintings - for which he occasionally also used unusual materials such as clay or sand - he also created sculptures, stage sets and book illustrations. Masson made a ceiling painting for the Théatre Odéon in Paris.

In 1977 he was elected an honorary member of the American Academy of Arts and Letters .

The conductor Diego Masson is his son. André Masson was a brother-in-law of the influential psychoanalyst Jacques Lacan . 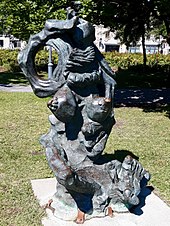