Collioure (in Catalan Cotlliure ) is a French commune with 2,427 inhabitants (as of January 1, 2017) in the Pyrénées-Orientales department of the Occitania region . The inhabitants are called Colliourencs (Catalan. Cotlliurencs ).

Along with Argelès-sur-Mer and the neighboring Banyuls-sur-Mer and Port-Vendres, Collioure is a tourist attraction on the Côte Vermeille north of the Pyrenees . It belongs to the growing area of ​​the sweet wine Banyuls (VDN) . Collioure is an old fishing village with two harbor bays separated by an old royal castle, delimited by its picturesque fortified church , whose tower was formerly a lighthouse.

The area was already settled in prehistoric times, as can be seen from the countless dolmens , so u. a. near the well-preserved hamlet of Rimbau on the Molló Pass and in l'Arqueta .

Excavations in front of the castle have shown that the place was already in the 6th century BC. Existed. It played a significant role in ancient times , where it served as a port for the nearby town of Elne .

Collioure is first mentioned in 673 as Castrum Caucoliberi . A later text from the 9th century, based on an older text from the 5th century, also uses the name Caucholiberi . In the following years there developed the spellings Cochliure , Cocliure temporarily in Cobliure or Copliure , simultaneously in Coblliure or Coplliure transformed. The Catalan spelling Cotlliure was not used very often. The French spelling developed in the 19th century.

The castle was mentioned as early as 673, proof of its strategic and commercial importance during the Merovingian era. This year the place was conquered by the Visigoths . Later occupations by Saracens and Normans followed.

The original castle was built in 981 by the Counts of Roussillon , after which the place was under the rule of Aragon . The present castle (1173) also dates from this period. During the subsequent reign of the kings of Mallorca , the square donjon on the rock spur was completely renovated between 1242 and 1280 and converted into a royal residence. The place remained the most important trading port of Roussillon in the Majorcan Empire. In particular, the famous Perpignan cloth , bed linen, oil and wine were exported, while spices, oriental fabrics and other exotic products were imported.

The Spanish kings Charles I and Philip II had the castle converted into a citadel , reinforced by Fort St. Elme in the south and Fort Miradou in the north. It should be mentioned that there was another castle in Collioure, which the Templars had built during their almost 100-year presence and which became a castle of Malta after the forcible dissolution of the order (around 1312) . 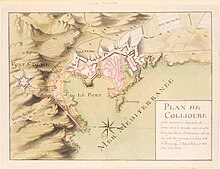 Plan of the Vaubans fortress

The French occupation at the end of the 15th century, when the place was ordered by King Louis XI. in Saint-Michel (1475-1481) was renamed. After the capture in 1643 as a result of the Peace of the Pyrenees , its strategic importance was redefined by fortress builder Vauban , who wanted to turn it into a garrison site . He dragged the old town to expand the castle and to build new forts and extensive entrenchments .

The fortified church in Collioure

The population threatened with relocation to Port-Vendres decided to rebuild the city in its current location, the Vieux Quartier du Mouré . In 1793 the place was occupied by Spanish troops and liberated by General Dugommier in May 1794. Collioure remained royal property until the revolution .

In the 19th century, Collioure experienced a significant economic boom due to the expansion of fishing , especially the success of the Collioure anchovies , and viticulture. The upswing continued until the beginning of the 20th century: After a high point in 1857 with 3846 inhabitants, it fell back to 2830 inhabitants in 1901, which corresponded to a loss of 1000 inhabitants in five decades. The development of Port-Vendres undoubtedly made up for this.

The Château Royal served from March to December 1939 as a detention center for refugees from the Spanish Civil War that were considered particularly dangerous (mainly anarchists and communists ). The so-called Camp Spécial was notorious for the inhumane treatment of the up to 1,000 Spanish interned, some of whom did not survive the camp. In December 1939 the prisoners were transferred to the Camp de Vernet internment camp .

In the 20th century, the population stabilized between 2500 and 2900 inhabitants. Today, the place is visited by tens of thousands of tourists every year in the holiday season, who determine the image of the small town. On the one hand they represent a burden for the infrastructure and the lives of the locals, on the other hand they create and secure many jobs and give the place an international flair. 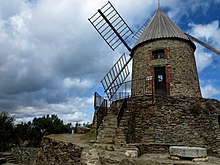 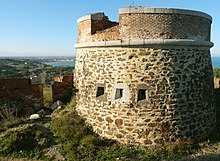 The Tour de l'Étoile (also called Fort rond ) from 1725. In the background the bay of Argelès .

Fortress Fort Carré , along with the 1725 rond Fort built