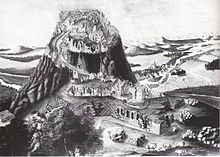 Razing usually refers to the demolition of castles or fortifications by the losing party in a military conflict. It is carried out by removing, leveling, blasting or tearing down. The facility was rarely completely destroyed.

Originally the term referred to the removal and rendering unusable of conquered enemy fortresses, as these were of enormous strategic importance, especially before the invention of black powder and the resulting emergence of wall-breaking weapons. The enemy was supposed to be weakened by reducing the ability to repel future attacks. Razing for military reasons was mainly carried out when the conquered area was not to be permanently occupied or the use of the defense system for the new owners was only possible to a limited extent.

In the 19th century, many of the outdated fortresses were razed as they had become militarily obsolete and the growing cities required more and more space. The simplest solution was often to create a building site on the site of the fortifications in the city center. This process of removing urban fortifications is specifically referred to as de- fortification or defortification . The resulting overburden made of brick , clinker , boulders , etc. served as material for the development. The grinding was carried out by mechanical removal of walls and ramparts, the leveling of trenches and, if necessary, by blasting . Most of the areas on which the fortifications were located were used as parks and green areas ( promenades ) or for (ring) streets (see Ringpark ). Sometimes individual parts of the building that were regarded as historically significant were preserved and incorporated into the green areas or the new streets and squares, such as B. some medieval city gates in Cologne or the Holstentor in Lübeck.

The outlines of the old ramparts are often still clearly visible in the cityscape. Examples are Planten un Blomen in Hamburg , the Frankfurt system ring as a replacement for the ramparts there , the Bremen ramparts , the Cologne green belt or the Münster promenade . In some cities such as B. Aachen you can see two ring roads, which are based on an older and a newer fortification system (see Aachen city wall ). The Vienna Ringstrasse is also famous , on the sides of which prestigious magnificent buildings were built at the end of the 19th century, which in Vienna is also called the Ringstrasse style .