The Bremen ramparts were part of the Bremen city fortifications and emerged from the fortifications built up to the 17th century and are now a popular park on the edge of Bremen's old town. They are not only Bremen's oldest, but also the first public park in Germany that was realized by a bourgeois parliament.

Beginnings of the city fortifications 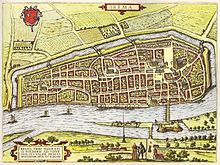 The city fortifications of Bremen in 1598

As a classic round village, Bremen was probably protected by a wooden wall from the beginning, i.e. since 782. This was replaced by a brick wall built on boulders no later than 1229 . Some sources also say that the first city wall was built around 1032. In addition, a first city moat was dug outside this wall, which was fed by the water of the Weser and the Belge . By 1250 the city had six gates:

Half a century later, in 1305, the fortification ring was enlarged and drawn around the Stephaniviertel. The city wall at that time was 1.20 meters thick and five meters high. It had a wooden walkway, loopholes and 22 towers.

Plan of the new ramparts

In the 17th century until 1664, the Bremen fortifications were expanded according to the plans of the Dutch fortress builder Johan van Valckenburgh . He developed a concept that envisaged a jagged moat around the entire city, including the newly founded Neustadt on the left bank of the Weser. The realization took place in the new town from 1623 to 1628. The old town followed from 1660 to 1664.

The excavation from the approximately 3.30 meter deep trench was heaped up as a wall behind it. The bulges within the water ring were occupied with cannons and functioned as bastions. The city wall, which only existed in the old town and was there behind the earth wall, was reinforced. It had five gates around 1750:

In the Neustadt there were only two passages through the wall:

The only real attack the fortifications had to withstand was the siege by the Swedes in 1666 in the Second Bremen-Swedish War .

Hand-colored view of the ramparts with people around 1900; Stereoscopy No. 881 from Knackstedt & Näther

In the 18th century, the military value of the facilities had become relatively low, since the age of great sieges and wars of aggression in Central Europe was over. The bastions were increasingly being misused. They built windmills on them, planted with trees and laid gardens and paths to the water points. So it was decided in 1802 to dismantle the parapets and to redesign the ramparts to an English landscape garden.

The gardeners Christian Ludwig Bosse (1802) and Isaak Altmann (from 1803) were commissioned to carry out the work . The first phase of construction began in 1803 between the Weser and Herdentor, and the entire complex was completed in 1811. The ramparts were flattened a little, footpaths were laid and the seven windmills were integrated into the park. The jagged shape of the moat was rounded off. Under the first Bremen horticultural director Paul Freye , the ramparts were changed again in the 20th century, but their characteristic shape with the zigzag city moat has largely been preserved to this day. Only in the western part of the facility were changes made with the construction of the railway line to Oldenburg in the 19th century and the construction of the Stephanibrücke and the access road. Among other things, the moat in this area was filled in and the green space was reduced considerably in favor of road and rail areas.

In the Second World War, the municipal theater built in 1843 on the "Theaterberg" (the bishop's needle bastion ) was destroyed. The remains of the ruin were demolished in 1965. The area was then redesigned from a horticultural perspective and became part of the ramparts as a theater garden . The theater business was resumed in the Theater am Goetheplatz , Goetheplatz No. 1–3. In the post-war period, the art crypt was a landmark in the old bunker on Theaterberg, which was demolished in 1968 in order to redesign the garden.

In the 1950s, the area of ​​the war-torn Focke Museum was incorporated into the ramparts after its horticultural redesign as the Focke Garden , so that they extend back to the Weser at their western end.

The ramparts still enclose almost the entire old town today . They stretch from the Weser am Osterdeich in the east to Doventorswall in the Stephani district, where they are interrupted by Oldenburger Straße ( Bundesstraße 6 ) and on to the Focke-Garten . 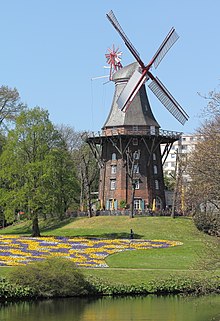 The demarcation from the city center is the street Am Wall , a busy street with shops in partly old, handsome buildings with a wonderful view of the park and the Contrescarpe beyond the ramparts .

In the Neustadt there is only a small lake as the rest of the moat, the Piepe , which was previously used as a wooden harbor. The interrupted green zones of the Neustadtwallanlagen mark the former watercourse here.

In connection with the celebrations on the occasion of their 200th anniversary in 2002, the ramparts , which have been under monument protection since 1973 and 1977, were restored from 1998 to 2002 under the direction of Stadtgrün Bremen according to garden conservation aspects. Paths were renovated or newly laid out and new plantings made. In addition to the function of a green lung , the facilities are used for many events that have had more than 100,000 visitors in recent years. 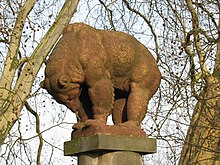 One of numerous smaller sculptures in the ramparts